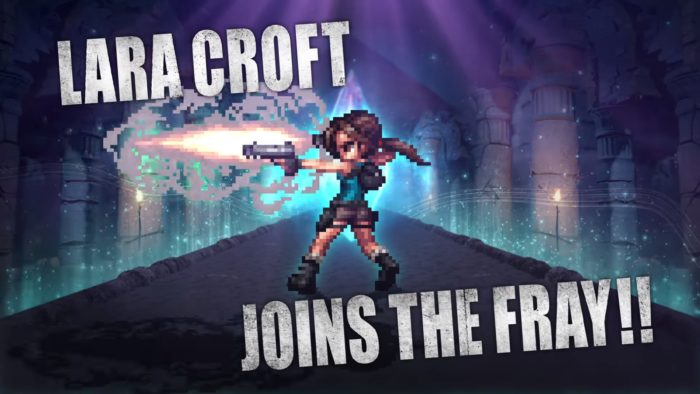 To celebrate the upcoming release of the new Tomb Raider movie, Square Enix is releasing a special Lara Croft character for you to add to your roster in the mobile game Final Fantasy Brave Exvius.

From March 9 to March 22, you will be able to attain Lara Croft and take part in special themed content that ties into the Lara Croft universe. To add Lara to your current roster you’ll have to complete the first stage of the event (or just collect it through daily login bonuses, which are also being upgraded for the limited event).

Lara’s costume in the game is modeled after her appearance in the top-down action game Temple of Osiris and other characters in the game are also getting the Tomb Raider makeover (Explorer Aileen, Divine Soleil, and Pharaoh Abel). To obtain those other Tomb Raider-themed characters, you’ll have to use Gacha summon pickups found in the game. Not only that, the Temple of Osiris theme runs deeper than just characters as there’s also a new themed raid seeing you battle the giant snake Apep. To get a preview of what to expect check out the announcement trailer below.

Final Fantasy Brave Exvius is a free-to-play mobile RPG which combines the gameplay of both Brave Frontier and Final Fantasy in one hybrid game that lets you take control of Final Fantasy characters from every entry in the series. The game has been a huge success and this week even reached the milestone of 30 million downloads worldwide. The game has received a lot of support over its lifetime and continues to be updated to this day, despite releasing all the way back in June 2016. This crossover announcement is even being accompanied with a few other changes like the ability to get five max level Ashes and five Lightnings as rewards for completing the opening missions, an effort to give newcomers a head start in the game, so expect support to carry on in the near future.

Final Fantasy Brave Exvius is out now on both Android and IOS. With Tomb Raider releasing in theaters March 16.