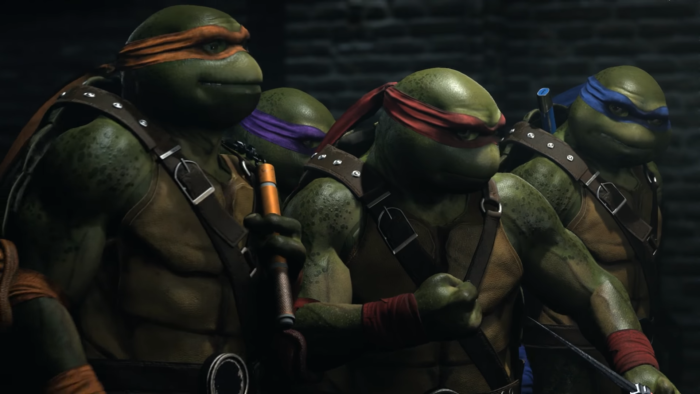 Ninjas are supposed to strike swiftly and silently and then fade into the night. Lucky for us, the Teenage Mutant Ninja Turtles are a little more flashy in Injustice 2.

The Internet positively exploded when NetherRealm Studios announced the heroes in a half shell would be in the final Injustice 2 fighter pack, although we haven’t gotten a good look at the turtles in action until now. The long-awaited character trailer for the TMNT is brimming with enough turtle power to make you want to scream, “Cowabunga!”

Ever since the original announcement, gamers have speculated how the turtles would be implemented into Injustice 2. According to the trailer, all four are playable. That’s right: Leonardo, Donatello, Raphael, and Michelangelo come with their own movesets and voice lines. There is some overlap, though, as each turtle can call for assistance from his brothers, and they all join in for a shell-shocking super move.

While the trailer is, for lack of a better term, tubular, it does leave audiences with some rather important questions. Do the turtles take up their own roster spots in Injustice 2, or are they a team of four squashed into one character spot? Can players switch between them on the fly like Marvel vs. Capcom fighters, or will gamers be stuck with one turtle per match? How many past TMNT shows, movies, and comics will the alternative costumes reference? NetherRealm Studios will hold a livestream later today at 3PM CST (4PM EST, 2PM MST, and 1PM PST) that, with any luck, will answer most of these questions.

While we do not know the exact date when the TMNT will be playable in Injustice 2, the trailer promises sometime in February. But, since every other DLC character (with the exception of Raiden) was released on a Tuesday, odds are we can expect turtle power to grace the game either February 13th, 20th, or 27th.

4 Features the Xbox Series X Needs to Be a Must-Buy
By Chris JecksJanuary 27, 2020

Muv-Luv Alternative Sequel Muv-Luv Integrate Will Have a Brand New Protagonist
By Giuseppe NelvaJanuary 27, 2020
To Top