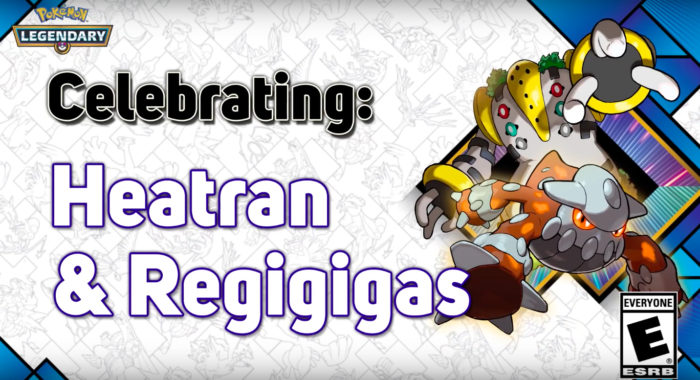 To celebrate the availability of Regigigas and Heatran to members of the Pokémon Trainers Club in March, three of the series’ developers break down what make the mythical monsters so special in a new video interview.

Posted to the Official Pokémon YouTube Channel, the video shows battle director Shigeki Morimoto, Ultra Sun and Moon director Kazumasa Iwao and Ultra Sun and Moon producer Shigeru Ohmori discussing what makes the legendaries stand out as must haves for the aspiring trainer. Whereas Regigigas blends power and speed to great effect according to Iwao and Ohmori, Morimoto makes the case that Heatran has the potential for devastating fire attacks through its Flash Fire ability. The full video can be viewed below.

Regigigas and Hearten are the latest legendaries to be rolled out as part of Pokémon Company International’s legendary release schedule for Pokémon Ultra Sun and Ultra Moon in 2018, with two legendaries made available every month. This month saw Dialga and Palkia up for grabs, while April will offer Raikou and Entei.

Those interested in picking up March’s legendaries can do so by signing up for the Pokémon Trainer Club newsletter by March 1, which will net them a special distribution code.

Ultra Sun and Ultra Moon are currently available on Nintendo 3DS. For more on the series and its future, check out our review of the series’ most recent titles and our feature on why the Switch needs a Pokémon game announcement to continue dominating the competition.

Can You Identify These 10 Pixelated Animal Crossing Characters?