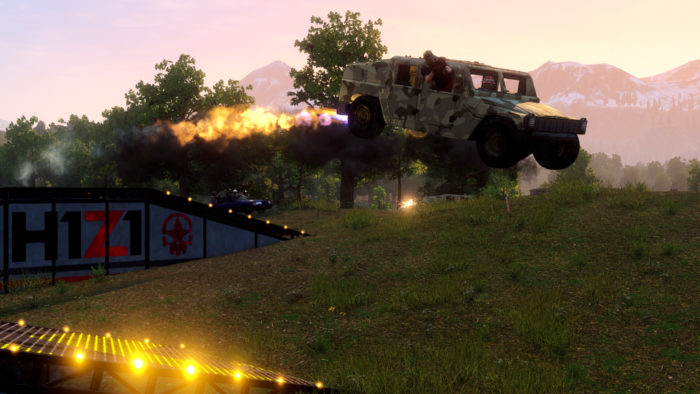 H1Z1 is finally leaving Early Access at long last, and it’s brought a new vehicle-based combat mode with it. Daybreak Games’ battle royale game debuts today in full along with the new Auto Royale mode, which is a mix of arcade-like vehicular combat to help hype up and celebrate the game’s full debut.

The new Auto Royale mode can support 30 teams of four in cars where players compete while collecting power-ups to be the last person left in the massive car battle. You can use two new vehicles that were just added, like the ARV and the sedan, to get across the map, but you’ll have to watch out for landmines, oil slicks, and other dangers as you drive through. The Light Machine Gun (LMG) has been added as well to help make things a little easier.

Auto Royale is the biggest addition to the game with the full release, but there have also been some tweaks added in to the base H1Z1 game, such as a new mini map, a Founder’s Item that you can outfit your character with (it’s a T-shirt!), a refinement for the airdrop system, and the choice of where you can parachute down into the game at the beginning of a match. Aside from all that, this marks the start of H1Z1’s first in-game season, so you can start measuring your skill against others.

Are you looking to get back into H1Z1 now that it’s officially debuted? Let us know in the comments below.