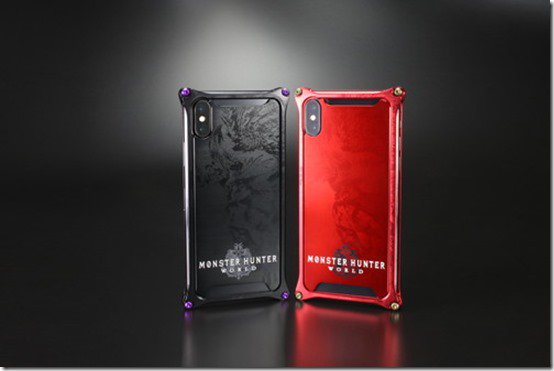 Capitalizing on Monster Hunter: World’s massive popularity is on Capcom’s agenda right now, as well it should be. The company is working in tandem with GILD Design for two new smartphone cases based on the game’s monster Nergigante as well as Rathalos, so if you were in the market for a new phone case, you may want to check these out before buying something new.

The two cases are purple and black and bright red, respectively, and they look much like the GILD Design cases created for Kojima Productions and the launch of Metal Gear Solid V: The Phantom Pain. The idea behind them is “serious production for your smartphone,” with the actual case made of Duralumin. Both are fairly expensive endeavors as well, with laser-etched logos and imagery on each case. They’ll both cost about 13,000 yen when they launch in Japan.

The Rathalos cases will be available in Japan in late March, and the Nergigante cases will be around in mid April. You can nab them for iPhone 7/8, iPhone 8 Plus/iPhone 7 Plus, and iPhone X. If you have an Android phone, it looks like you may be out of luck for the time being. It doesn’t appear that the older GILD designs accommodated Android users, either.