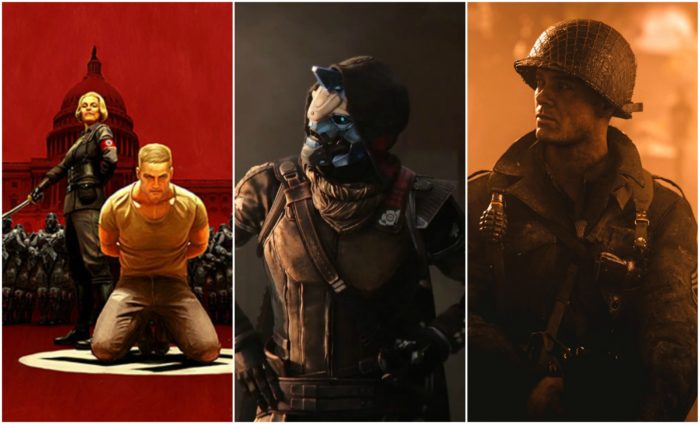 It’s award season here at Twinfinite! Let’s look back at the best first-person shooter games from 2017. Voted on by our editors, these games, in particular, stood out as the best shooters from the previous year taking into account both story content and gameplay. Let’s start our top vote-getting honorable mentions, runner-ups, and finally, of course, our overall winner!

Resident Evil 7 isn’t a first-person shooter in the conventional sense. You’re not a soldier taking part in a battle in a large scale war, nor are there any kill-to-death ratio focused multiplayer modes that pit players against each other. Instead, the action is slower and more restricted, with you having to explore the house and defeat those that inhabit it. It may be different from the other games on this list, but that doesn’t disqualify it from being one of the year’s best first-person shooters.

While the first-person perspective is a departure for the series, much of what Resident Evil 7 does takes the series back to what made the earlier games so great. The way you slowly explore the Baker house, nervously checking every corner, creates a tension and atmosphere that is seen in very few games. Every door that creaks, every clock that ticks, and every distant scream keeps you on edge and makes for a terrifying experience.

While you’ll come to know the house like the back of your hand, Resident Evil 7 is far more than an exercise in exploration. There’s combat that offers you a few ways to approach situations. Since ammo and weapons are scarce, you can simply try to outfox enemies with your movement, or try to take them out with precision shots. The tightness of the locations keeps the tension high, even in these fights, so that you’re on the edge of your seat (or maybe behind your sofa) at all times. Resident Evil 7 took some risks that payed off and it is great to see the series back on form.

Lots of people either love Destiny 2, or love to hate on it. However, something that rarely gets complained about is the game’s fantastic first-person shooting. Say whatever you want about anything else, but shooting aliens in Destiny 2 is incredibly satisfying. It’s crisp, fast-paced, and strategic too. You’ll need to make use of your character’s abilities and loadout plus your FPS skills to complete the game’s most challenging content. Those that embrace Destiny 2 fully can enjoy putting together a build that is dominant in either PvE or PvP content.

When you have a solid foundation built upon excellent feeling shooting, the sky is the limit. At its best, namely during its raid content, Destiny 2 is one of the deepest and strategic FPS games ever made. While Bungie has more work to do in beefing up other content to match the fun of the raid if it wants to get to Destiny 3 in one piece, there’s no doubt that Destiny 2 is one of the finest FPSs in 2017.

Call of Duty: WWII is another first-person game to head back to its roots in one way or another. Gone are the futuristic weapons and jet-packs of the past few games, with trenches and beachfront invasions returning in their place. By reverting back to the setting that made the Call of Duty series what it is today, Sledgehammer games hoped to end the sales decline of the last couple of years.

The campaign removes regenerating health and throws you into a small squad that emphasizes the ‘boots on the ground’ tone that was a core part of the game’s marketing. Being part of a squad makes for a far more personal story; one with emotional moments and some interesting characters. It feels far more like classic Call of Duty, just with the addition of the technical advancements that have come over the years.

The other modes don’t see so much of a change. Multiplayer follows the same format as usual, pitting small teams against each other in small warzones (aside from the new, objective based War mode), with the changes being limited to the addition of the Headquarters hub and changes to progression. Zombies also returns to inject some insane carnage into the game. The characters are crazy and the action is even more so, and it is great when playing with friends.

The three modes all very different in terms of theme and objective but all of them feature Call of Duty’s consistently excellent shooting gameplay. That gameplay, alongside the variety it offers, ensures that WWII is one of the best in the series to-date.

The world of the modern first-person shooter is generally dominated by multiplayer battles and shared fantasy worlds but Wolfenstein II: The New Colossus bucks that trend entirely. Not only does Machine Games’ sequel feature full-throttle violent gameplay but it also tells an incredible story that elevates it above every other shooter from 2017.

Anyone that played The New Order will know exactly what to expect from The New Colossus’ gameplay. It can be fast and brutal if you want it to be, or slow and calculated if you prefer to quiet approach. Each level is designed so that all guns blazing and stealth are both worthwhile tactics. The guns are unique and immensely powerful and the game can be very tough at times, ensuring you have to put some thought into every action.

However, no matter how good the gameplay is, it is the narrative and characters that make Wolfenstein II special. Not only do some of the most memorable scenes from gaming in 2017 come from The New Colossus but its cast of characters is fantastic. There’s much more to each and every one of them than meets the eye and their relationships add heart and humor to an otherwise bleak story, making you truly care about them individually, rather than just about the cause they represent. Wolfenstein II shows that the single-player first-person shooter is a genre that is still alive and kicking.