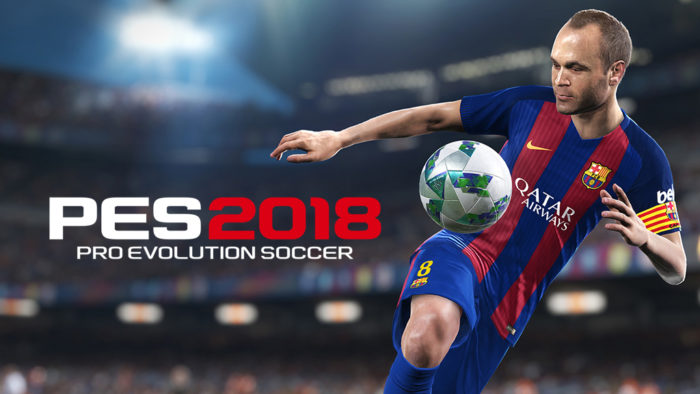 Since PES’s renaissance of sorts that came with the move to PlayStation 4 and Xbox One, it has had almost the opposite strengths and weaknesses of its EA developed rival. While it is the undeniably the strongest on the pitch, offering increased control and realism over FIFA, it is outshone in every area away from the action. Once again, even with slight improvements across the board, 2017’s offering doesn’t suggest that Komami is going to do what is necessary to take it far above the competition.

PES takes football gameplay another step closer to perfection. The action is noticeably slower this year, with players taking longer to turn and passes taking more time to reach their target. This allows for more precision and variety in your attacking play. Players are just as comfortable with tiki-taka play in small spaces as they are with long balls up to the striker for him to hold up. Their ability to play the correct pass, with whatever body part is best suited, also keeps the play flowing, even with the general pace decrease. Whether it be a sweeping, lofted through ball with the outside of the foot, or a flick around the corner with the heel, players can play the required pass when it’s needed, without the need for you to press any ‘flair pass’ button. This makes for constantly satisfying moves that can see you carve a defense apart with just a couple of perfectly timed passes.

Playing with or against Barcelona now feels like you’re playing with or against Barcelona. Busquets and Iniesta are able to keep the ball when under pressure by wriggling out of harm’s way while Messi is able to slip between gaps in the defense as easily as he can in real life. Players like Cristiano Ronaldo and Gareth Bale are quick and powerful, while Ibrahimovic and Giroud are able to hold defenders off and bring others into play with their back to goal. You can alter your tactics to suit your own style of play and that of whichever team you are facing, without any option being worse than another.

Also, since AI defenders are usually great positionally and goalkeepers, while not perfect, are significantly better than recent FIFA games, you have to think about each attack. There’s also no goal scoring exploit that can be repeated with every attack so through balls, chipped finishes, and long range finesse shots are all worthy options. Having the ball in PES 2018 feels wonderful due to the precision in every action.

That precision is even noticeable when looking at every player’s movement animations. The game’s fluidity and style owe a lot to aspects such as a player’s arm placement as they turn sharply or how they react to an on rushing goalkeeper. Almost every aspect of PES 2018’s on-pitch play is precisely authentic.

The excellent gameplay is what is at the core of each of PES 2018’s modes. You’ll likely be familiar with most of them but they’ve all being given subtle tweaks to make them more inviting. First, Random Selection Mode is the only ‘new’ mode and even that is something that was featured in PES games a decade ago. It adds variety to Exhibition matches by allowing you, and others locally if you wish, to choose the parameters for a random selection of players to be chosen to form a team. Then, over up to three transfer rounds, you can attempt to swap players with the opposing team. It’s a fun way of adding a little more thought and rivalry to the basic mode but it isn’t something you’ll invest a lot of time in.

When it comes to returning modes, you’ll find MyClub, PES’s answer to FIFA’s immensely deep and popular Ultimate Team mode, Master League, which sees you run a club both on and off the field, Become a Legend, which sees you create a player and control him as he plays his way to the Champions League, and a mode which sees you play though the entirety of a club’s journey in a European competition.

MyClub remains largely unchanged, tasking you with building your perfect team by playing matches both online and off to get currency to spend on new talent. Master League is still deep and the most involving mode as you take control of your team’s play style and the club’s transfer policy. Then, Become a Legend features a creation tool with a huge number of options, yet it lacks the cinematic appeal of FIFA’s The Journey, making it feel a little old-fashioned. All these modes are substantial and offer a variety of ways to jump into the wonderful gameplay but there isn’t much new to see for anyone that played last year’s offering.

While every one of these modes offers something interesting, PES’s presentation is severely lacking in quality when compared to every other popular sports title. The lifeless menus are mostly made up of dull, grey boxes that become difficult to navigate in the deeper modes, such as myClub and Master League. While players look good for the most part, especially the sport’s more famous stars, the pitch itself looks like someone ironed a Subbuteo pitch more than it does real grass. However, it is Konami’s attempted re-creation of the match-day atmosphere that is particularly off-putting. Up close, the crowd looks varied and enthusiastic but a block of spectators looks and sounds far more like a cardboard cut out than living, breathing fans. Also, the style of the Champions League is used throughout, yet, aside from the competition’s iconic fanfare, it never matches the grandeur of a big European night. The commentary does nothing to help this either. Jim Beglin and Peter Drury return with their seemingly disconnected comments that can veer towards the downright weird at times. At no point does playing PES 2018 feel like being wrapped up in the atmosphere of a real-world football match, be that televised or not, but that has been the series’ issue for years.

The licensing issues are also frustrating. While I won’t pretend to know how difficult it must be to get permission from superpower clubs and organizations across the world, it is undoubtedly odd to be playing as Man Red or Man Blue using kits that look nothing like their real-world counterparts. There are some exceptions, such as Barcelona, Liverpool, and Arsenal (thankfully), but the majority of leagues, teams, kits, and stadiums are alternate versions of the real thing.

While the same issues of bland presentation, a lack of in-game atmosphere, and licensing inconsistencies return once again in PES 2018, if you’re looking for a football game that plays close to perfectly, offering you the control to be precise with every touch of the ball, Konami’s game is comfortably the best option around.