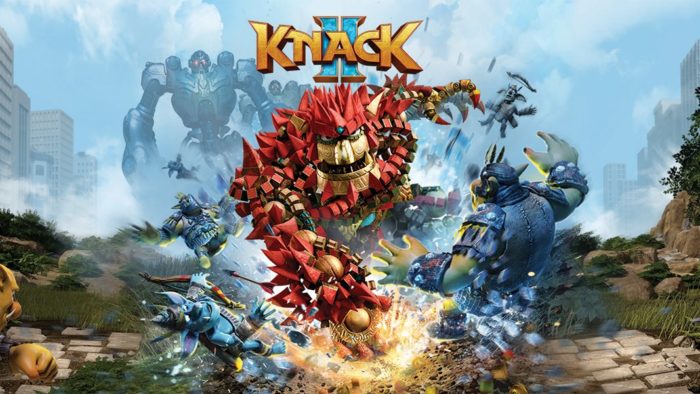 The launch of the PlayStation 4 was filled with some middling games, but none more so than Sony’s new IP Knack. Made by the legendary Mark Cerny, of Spyro and Crash fame, fans hoped it might be the spiritual successor to the classic character platformers of past PlayStation systems. Unfortunately, it failed to live up to that expectation, but with the release of Knack 2, the series gets another crack at life. As it turns out, this second adventure with Knack is much better, albeit still with a few issues.

Knack 2 takes place a few years after the first game during a desperate situation as the city of NewHaven is being ravaged by a robot army. Knack and his friend Lucas talk about how they played a role in this happening, and as the game flashes back most of the story is spent finding out just what went wrong and how.

The story of Knack 2 certainly isn’t going to go down as one of the all-time greats, but it is enjoyable in an animated blockbuster kind of way. Coupled with the surprisingly impressive graphical style, Knack 2 really reminded me of a DreamWorks animated film, something like How to Train Your Dragon. It lacks a bit of the charm seen in those films, but the characters do grow on you by the end, even if the plot twists can be seen from a mile away. Graphically Knack 2 is much stronger than the original, and with PS4 Pro support the game can really pop with its vibrant cartoonish style. There’s no doubt to me that younger players may find this an exciting adventure to romp through, but its story is a serviceable vehicle to the meat of the game: combat, puzzle solving, and platforming.

It seems like nearly every complaint from the first Knack has been dealt with in at least some way. The most noticeable difference comes with how gameplay is split up, as there’s a decent mix of platforming sections, combat, and puzzling. There doesn’t seem to be an over reliance on any one aspect, even though combat does take place more often than the others. Speaking of combat, it’s much more robust here than in the first game. 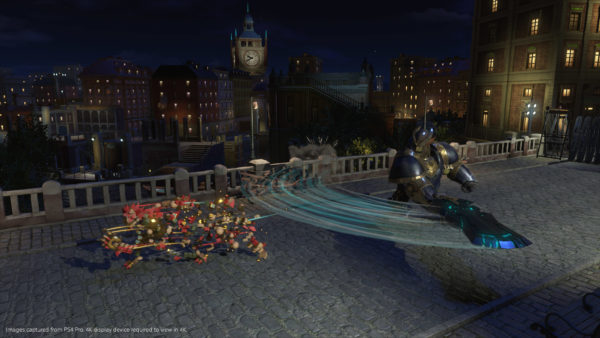 Knack has a basic moveset at first, letting him punch, kick, jump, and dodge. However, it’s fast and fluid, letting you dodge around enemies and zip back and forth around the screen. Things get much more interesting, however, as you unlock new moves and abilities for the shape-shifting Knack.  In addition to teaching you new moves through the story, there’s a basic skill tree that allows for a little bit of variation as you gain experience and level up. This isn’t a huge RPG skill tree, but does improve your abilities and unlock new moves at a good pace through the story.

At the same time, there are a number of collectibles scattered throughout the game, sets of items that unlock a “Gadget” or crystal version of Knack for use. These Gadgets add on small alterations to Knack’s abilities, like increasing damage as your combo count goes up. They’re small additions, but most of the Gadgets ultimately don’t feel worth it. It’s not hard to find these hidden items, however, as with minimal exploration, you can rack up quite a few.

It took some getting used to, but I was surprised at how much I was enjoying the flow and quickness of combat after a while. It’s just disappointing that it really takes so long for combat to open up to its full capacity. In retrospect, the first half of the game feels slow compared to the second half, both in terms of combat and story. I found myself having much more fun during the last few hours, as the game found its groove. Things get even more fun when the game plays with Knack’s special ability and how he can increase his size by collecting relics. As you travel through each level you’ll accumulate more and more relics, making Knack grow from his tiny form to a hulking beast at times.

There are some really smart things the game does with this mechanic, and my absolute favorite moments involved me rampaging through streets or enemy bases as a giant Knack, smashing through structures and obstacles in my way, as I walk over enemies. There’s a certain sense of satisfaction as you hit an enemy once and send them flying, especially if it’s the same enemy type that gave you a ton of trouble 40 minutes ago when you were small Knack.

Of course, Knack’s size changing plays into much more than just combat, as you can shrink him down to his smallest size at any time by hitting the R1 button. If you’re really daring you can do this in the thick of battle to try and avoid enemy attacks, but Knack dies in one hit while in his small form. Where the ability really matters, though, is with platforming and puzzle solving.

Knack 2 has you constantly changing size to proceed through small areas, or solve some puzzle that your other form would just be too large to handle. There’s nothing super complex in the game, but some of the later platforming sections were definitely enjoyable with a little bit of challenge added in. It’s honestly fun to use the shrinking mechanic and see the world of Knack from two different sizes, not to mention just how much better everything looks with the updated graphical quality. This plays out in sequences like shrinking down to travel up the body of a giant robot, switching between your two sizes as you hit platforms that need longer jumps, versus ledges that you can only walk on when small. Knack 2 consistently throws these kinds of dynamics at you, changing your perspective as you have to piece your way through an area. 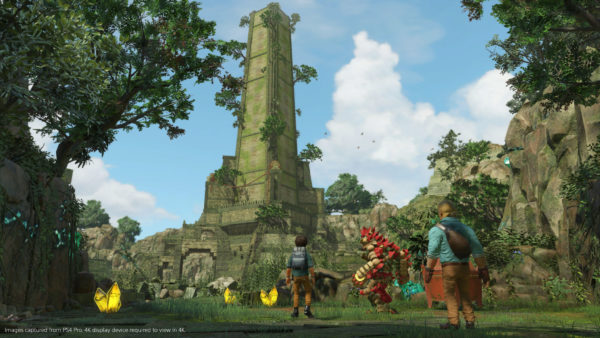 Knack himself looks much less goofy now, with red spikes on his body almost resembling hair with the way it moves, and animations feeling much smoother and less unrealistic. The game uses a fixed camera which works just fine for the most part, I only ran into a couple of instances where something was blocking my view.

Knack 2 also does a pretty good job at keeping things varied, putting in unique gameplay mechanics or letting you pilot some kind of destructive vehicle in certain levels. It’s a nice break from the flow of combat and platforming. There are a handful of quick time events thrown in as well, which are usually quite over the top with action. There were some fun moments with these, but overall I couldn’t help but feel like I wanted more control over these segments with more gameplay. Knack 2’s quick time events were impressive, and it was a bit disappointing to just be an observer of the action instead of being thrown into the thick of things.

Of course, if you don’t want to go Knack 2 alone you can bring a friend along with you for drop-in/drop-out co-op, which changes combat mechanics in some surprising ways. Unlike the first game, your co-op buddy grows in size as you do, and you can even absorb relics from each other. At the same time, you can utilize some fun moves by hitting the other player’s body, shooting out deadly bullets at enemies or causing some other effect. It’s just more fun to have a friend with you, and it’s also great that the game has unique mechanics to use while playing co-op. 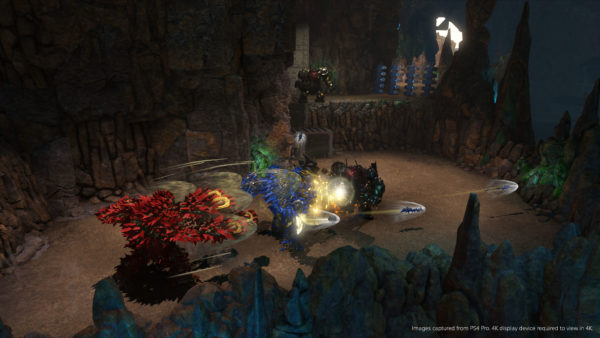 Difficulty can be an issue for Knack 2, and by that I mean the game can be far too easy. Anyone who has any experience with action games will want to play through on Hard at least, although there is a Very Hard option as well. Knack 2 can be a breeze on anything lower, and although I ran into some particularly difficult combat segments playing through on Hard, there wasn’t anything that halted my progress for too long.

This is in part due to the incredibly liberal checkpoint system, which feels like the direct opposite of what the first game had. The game basically saves a checkpoint after each and every combat encounter or platforming segment. This means if you make a mistake, you’re right at the combat encounter you lost at or right in front of the platform you fell off. At times this can almost feel too forgiving, as there are no ramifications for dying. There are encounters that prove tough, but the liberal checkpoint system can take away some of that challenge.

The thing that surprised me most about Knack 2 was how the experience got better as I kept going. The first few missions can be slow, but once the story and combat got their hooks in I found myself having a blast with the game. The story takes roughly ten hours to complete, with time attacks and coliseum attacks unlocking after you’ve beaten the game. With a $40 price point, Knack 2 isn’t a bad package, especially for younger audiences or families looking for a good co-op game. Sure Knack 2 has its share of issues, but it’s a definite step up from its predecessor.