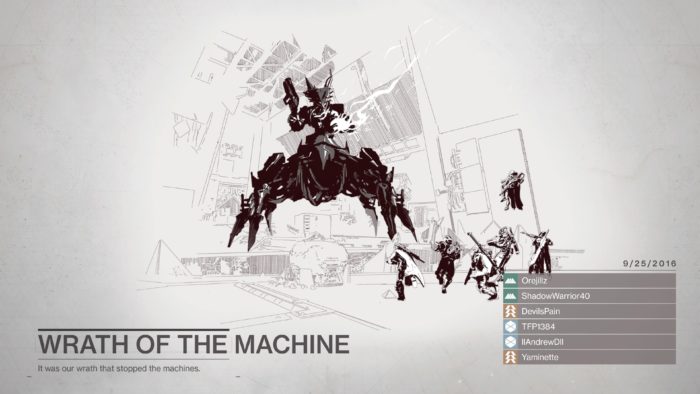 It appears that Bungie has definitely not forgotten about all of your accomplishments in the first Destiny, as there is a treat for returning players at the start of Destiny 2 (as long as you haven’t switched platforms). After watching the initial cutscene that describes the traveler, the game takes guardians on a trip down memory lane with beautifully illustrated images, time stamps, and even a list of the guardians who joined you for each of those challenges.

It all kicks off with a memory of you killing a Vex god, before showing your team standing against Atheon.

It continues to run through all of the major events, with each expansion’s beginning and their final boss as well. In our case, we got to see everything, including Aksis as he stood defiantly against our Fireteam of powerful Guardians. And when all is said and done, players are treated to one final image.

The last image depicts the tower while it was still standing. The Traveler looms in the background, and the central space is filled with Guardians going about their business. It’s a beautiful send-off to a game that has lasted much longer than anyone expected.

Destiny 2 is out Sept. 6 on PS4 and Xbox One, and will arrive on PC at a later date.