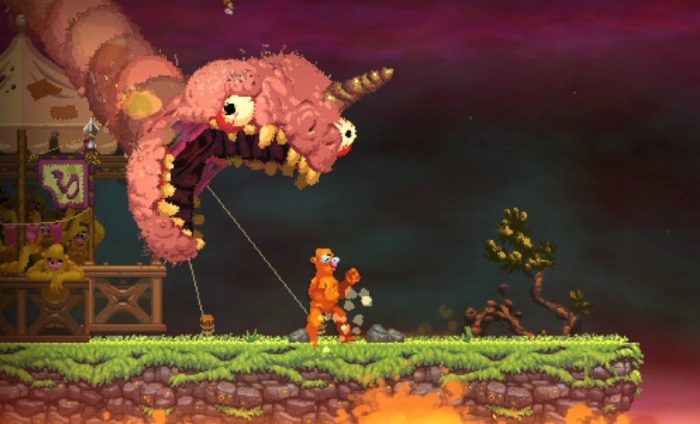 When the original Nidhogg was released back in 2014 it posed a foundation that seemed questionable at best. Combining a simple fighter with a side-scrolling foot racing game didn’t seem like the most exciting idea in the world, but Nidhogg proved many of its naysayers wrong. The wonderfully simple masterpiece delivered by Messhof proved to be an ode to the minimalism of the old school that also provided a challenging and unique gameplay experience. Nidhogg 2 brings the foundation of the original game back but with a new art style, more weapons, character customization, a fun collection of new stages, along with an extra punch of personality.

Nidhogg 2 takes a major step away from the original game’s art style in exchange for one that moves away from minimalism and the end result feels bittersweet.  The new stages offer a new sense of personality to the game that should absolutely be appreciated. There is something special about being transported to different worlds, especially when each one is jam packed with its own collection of environmental obstacles. They give the game a wonderful extra dose of personality and add a true sense of world building. The problem, however, is that the game’s new art style also makes these environments feel distracting and overbearing in a game where you really need to keep a close eye on the placement of your enemy’s weapon. The novelty of seeing the new stages shine in terms of being interesting visuals fades quickly once you find yourself losing matches because it becomes difficult to keep an eye on the battle. So while the environments still deserve praise for making good use of the new art style, it’s a shame that they aren’t nearly as practical as they are nice to look at.

Where the change in art direction really starts to feel cringeworthy, however, is in the new look for the characters themselves. Nidhogg 2 bids farewell to the simple 8-bit stick figures that once fought to the death and replaces them with new characters that look like the result of some sort of bizarre claymation gone wrong. While it’s not enough to ruin the experience that still lies at Nidhogg 2’s core, it does detract from what used to be a far more visually appealing experience.

But the good news is that Nidhogg offers a lot that helps counteract some of its visual shortcomings. When a game is still undeniably fun to play, it doesn’t really need to be extremely pretty or artistically compelling. This time around players have the option to duke it out using a variety of different weapons instead of only relying on their usual fencing skills. While some weapons feel far more viable and useful than others, the presence of different weapons still allows for more variation in strategy. Forcing players to use a constant rotation of the different weapons in the game allows for far more exciting comeback moments. Your opponent’s ability to properly predict where you might place your sword to attack can easily be trumped by the presence of a broadsword that could smack their weapon out their hands. While the bow-and-arrow may feel pretty underwhelming in battle, it does give you the option to fire arrows down screen if your enemy tries to scurry past you and make a break for the next screen. The variety not only demands that your strategy has multiple layers to it but it also adds to chaotic fun that sets Nidhogg apart.

But adding to the sense of chaos can truly be a double-edged sword. Sure, the new weapons mix things up a bit and make the game feel like a wild skirmish but the game doesn’t necessarily make any changes to make the weapons feel like they truly belong. The original sword still shines as the most well-rounded weapon of choice and often times the player who has this sword in their possession will be at an advantage until you can knock it away from them. In fact, my winning strategy for some games was to simply hop off a ledge if I knew the original sword was next up on the list for weapons I would respawn with. In terms of how Nidhogg 2 plays, you engage in a quick tactical battle before sprinting for the next screen, the original sword just makes the most sense.

It offers just enough range to give you the best chances to keep enemies at a safe distance. It allows you to utilize all three of the blocking positions. It doesn’t impede on your maneuverability and, like all weapons in the game, it still gives you a ranged option if you just toss the sword at your opponent. It is perfectly equipped for every aspect of combat in Nidhogg while the other weapons all come with major disadvantages that can lead to a “wrong weapon at the wrong time” situation. Whether or not you see this as a fun gambling game or a frustrating step away from focusing on a player’s ability to read their opponent and take calculated risks will ultimately boil down to just how competitive you’re feeling.

Along with the new weapons and an impressive total of eight different stages, Nidhogg 2 adds character customization. While this is a feature that sounds like it could be fun in theory, it’s also yet another departure from the brand’s original identity. Remember that Nidhogg used to be a game all about simplicity and old school visuals. Customizing these wonky looking characters feels very much like putting lipstick on a pig. They are ugly before you start customizing and they are uglier and even more distracting once you try to throw different garments on your character. The customization feature just doesn’t really add anything new or exciting to the experience but it does make the game look even more cluttered and busy once you have two customized characters on the screen.

The endless fun of poking and prodding your way to victory and rushing to the next playable area of the screen is still the foundation of Nidhogg 2 and it will be the key reason why you’ll find yourself struggling to put the game down for long. Going toe-to-toe with the game’s ridiculously easy AI in arcade mode is no fun but hopping online and duking it out with other players is exactly how this game is meant to be enjoyed. Ultimately, Nidhogg 2 is a unique game that is filled with charming quirks and strategic challenges. It’s only real mistake is not trusting in its original formula and undercutting its own successes with added fluff that just wasn’t necessary.