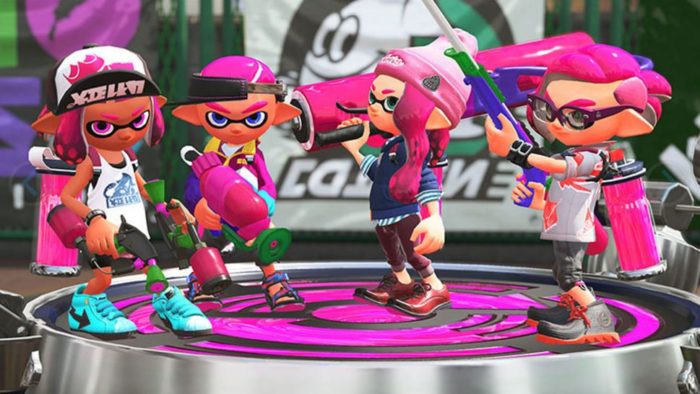 From the very moment Splatoon released it made one thing clear, it was a game about staying fresh and looking cool. While the unique design of the original certainly did this, it’s looking like Splatoon 2 can capitalize on that idea by not only upping the style but putting more of an emphasis on your own personal fashion.

Splatoon 2 is a vast improvement over the look and style of the first game, and that’s really saying something as the first Splatoon was certainly no slouch. By and large the main square is smaller than in the first game, but there’s so much detail and thought packed in. From things like characters taking pictures of Pearl and Marina as they give you updates, to the way light reflects off of the amiibo box plastic in-game. The differences may not seem substantial at first glance, but when you look at the two games side by side, they’re substantial. Just take a look at the comparison below by YouTube user Nomcomms.

All of this compiles into something important, Splatoon 2’s aesthetic makes it the perfect game to show off the Switch. It’s a vibrant, eye-catching game, and one that’s immediately going to get someone’s interest when they look at it. This is especially important considering the limited library of the Switch, and the fact that the system is in need of something new and exciting. Zelda, while a phenomenal game, is really the only showcase for the system’s power. A colorful, fun-filled game is the perfect thing to take with you on the go, showing your friends and family, or even playing with them. There’s certainly nothing else on the market like Splatoon, both in gameplay and aesthetic, meaning the style of the game is something people will immediately remember as an experience that you can only get on a Nintendo platform.

While ARMS also has a fairly striking style, it doesn’t hold a candle to the ink-filled mayhem of Splatoon. At the same time another new feature means you have more to show off than ever, with highly customizable Inklings. This time around you can alter your skin tone, eye color, hair style, and of course, clothing. There’s a lot more styles and options for keeping your Inkling fresh this time around; hats, visors, masks, jackets, boots, and much, much more.

This ties directly in to the added network capabilities of the Switch itself, in particular the screenshot button. Because personal style is now such a focus for your individual Inkling, it’s the prime opportunity to use that screenshot button and share your sweet style with all your friends.

Ideally, this would be the perfect time for Nintendo to implement video recording as well, both because of Splatoon 2’s customization and multiplayer focus. Nintendo has confirmed that video capture will be coming to the Switch, but we haven’t heard any news on the matter since then. Hopefully we can see the feature added to the Switch soon, as Splatoon 2 is easily the biggest multiplayer title on the system for the foreseeable future. Just think, now when each Splatfest roles around you can document your support and the festivities with snapshots, instead of only being able to experience it at the time.

This identity that Splatoon holds, and the promise of customizing your own Inkling, makes Splatoon one of the most important releases for the Switch in this first year of content. The Japanese pop/punk art style is a far cry from anything we’ve seen on a Nintendo platform, or even in gaming in general at this point. Splatoon 2 is accessible, it’s stylish, and it’s just the kind of thing Nintendo wants to make people wonder what that weird Squid Kid game on the Switch is all about.