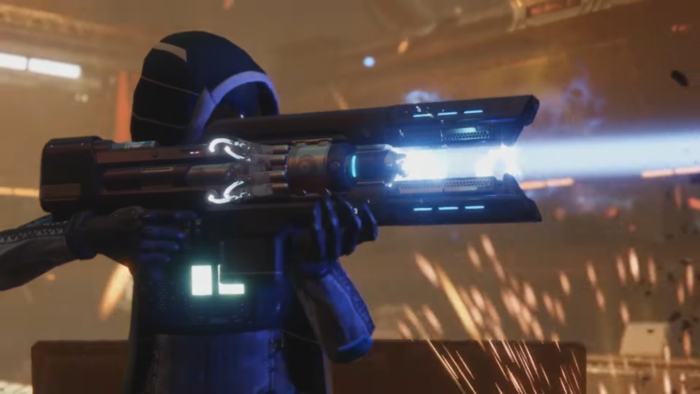 Bungie revealed exclusively through IGN today, a new weapon type that will be usable in Destiny 2, the Trace Rifle. Specifically, they showed off the Coldheart Trace Rifle, a weapon designed by in-game manufacturer Omolon Foundry. The gun uses a liquid fuel ammo which creates a solid and steady laser beam. See the Coldheart in action below. If you’re not interested in the developer commentary, skip over to around :54 to for a glimpse.

Bungie is shaking up Destiny 2’s weapon system dramatically from how players know it now in the first game. There are new weapon types, like this Trace Rifle, as well as a new grenade launcher power weapon and Bungie is also switching up how weapons are used entirely. Weapons are now organized based on whether or not they are Kinetic, have an element, or are capable of powerful one-shot kills, aka your power weapons.

The video’s description also reveals that the weapon will be a pre-order incentive at first, but then eventually will be available to everyone after Dec. 5 later this year. Be sure to check out the shameless Vanilla Ice-laden pre-order trailer for the gun as well.

Definitely watch the full IGN video above for a complete look at the Coldheart Trace Rifle including some insight on its design, and how it came to be. Is this weapon up your alley? Or will you be sticking to your old school guns with bullets and explosives? Let us know below in the comments.

Destiny 2 will release on Sept. 6 for PlayStation 4 and Xbox One and Oct. 24 for PC.