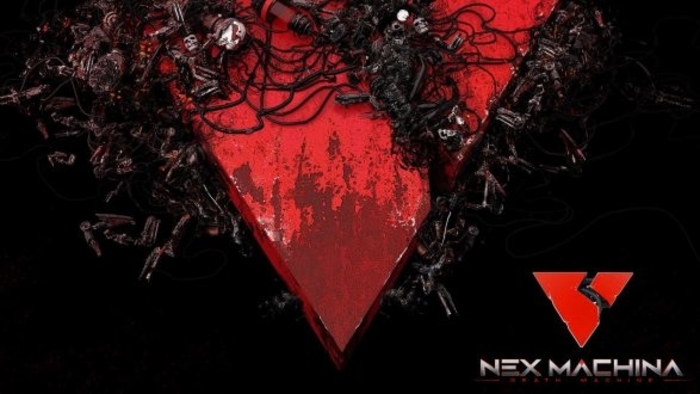 The masters of the modern twin-stick shooter are back with Nex Machina, a game that is more akin to their PlayStation 4 launch title, Resogun, and Super Stardust than last year’s Alienation. However, as many twin-stick shooter fans may notice, Nex Machina is clearly attempting to pay homage to arcade classics such as Robotron: 2048 and Smash TV. Housemarque even hired Eugene Jarvis, the developer of those classic games, to work on Nex Machina and recapture what made those games so special. However, playing Nex Machina makes it clear that it is more than a loving throwback; Housemarque has built on what makes their own games so great and has harnessed the power of modern platforms to create what may be their best game yet.

Arcade Mode, Nex Machina’s main mode, sees you play through the game’s five worlds (each made up of 15 smaller levels), taking out the robots and attempting to set the highest score you can. Five worlds make the game sound short of content, and while it would be great to have more variety in terms of location, there are many side objectives and smaller moments that make replaying levels really compelling. There are two extra types of special enemies that add to your score, there are hidden levels and humans to save, on top of the arena mode that tasks you with setting high scores to jump up the leaderboards and get medals.

The gameplay is also so simple and accessible, yet challenging to perfect, that replaying levels is consistently fun and gives you the chance to improve. Nex Machina’s control scheme only utilizes two buttons aside from the twin-sticks that are used for movement and shooting – one for dashing and one for using a secondary weapon, both of which are vital to setting high scores and mastering the higher difficulties.

As you make your way through the techno themed worlds, hundreds of robotic enemies swarm towards you and you need to destroy every one of them, saving the glowing green humans, as introduced as a side objective by Resogun, until you meet the world’s boss in the final level. It is frenetic, brutal, and on the higher difficulties, extremely challenging. It is never unfairly difficult, however, as it is clear to see how quickly you are improving as you replay levels. The difficultly is also tweaked by the number of continues you get in each world. In Rookie difficulty, you get unlimited continues per world, 100 in Experienced, ten in Veteran, and five in Master, with enemies getting faster and more powerful as you increase the difficulty level. Nex Machina is generally quite tough though, requiring total focus in every moment. So much so on the higher difficulties that, at the time of writing, only one person has completed the second world on Master difficulty, according to the leaderboards. You cannot get cocky or look away because, without you knowing it, a crawler will be on top of you and you’ll lose whatever multiplier you have managed to rack up. Manoeuvring your way around the level, away from the threats, requires quick decisions and spacial awareness, yet the game never feels like it gives you no options.

Not getting distracted, though, can be hard because Nex Machina is a joy to look at. From a presentation standpoint, Housemarque’s game is perfect. The action is incredibly smooth, with no hiccups or stutters to be seen no matter how much debris is exploding on the screen. The neon pink lasers and orbs that the robots fire towards you stand out in the melee, the bright green humans act as beacons of light amongst the chaos, and the clouds of tiny pieces that plume when an enemy is defeated often engulf the screen. The game’s wonderful visuals not only make the gameplay more satisfying but they make each individual world, some of which you only spend a matter of seconds visiting, stand out individually.

The design of each level is equally impressive. Each world has a theme, whether that be a snowy mountain or a futuristic laboratory, every level gives you space to escape the enemies momentarily and offers you a variety of orders in which to take them out. If you stay still for too long in certain places in the later levels, a enemy type that fires a slow moving circular laser across the entire map will corner you. The design of each level prompts you to keep moving and to think about how you are going to take out the hoards of bots that are about to come your way. That also keeps the action tense, as while you know there is a way around the enemies, you also know that there is nowhere to completely escape to.

Nex Machina’s music also adds to the intensity of the action. The soundtrack is predominantly pumping techno that matches the robotic style of the game but it all matches the intense gameplay. It is fast paced and is designed to get the heart pumping, just as the action does. It makes every moment feel more frenetic and builds as you get through the levels and crescendos as you reach the boss level. Ari Pulkinnen’s song, Let Me Save You, the game’s title music and the song you hear during the credits, is also an excellent song in its own right.

Aside from the leaderboards, there is a disappointing lack of online functionality in Nex Machina. There is offline co-op that sees you and whoever is sitting next to you on your couch take on the same worlds on the same difficulties, with nothing tweaked to account for there being two players. It is certainly helpful for the more challenging difficulties but since the camera no longer focuses on your location in the level, it is far easier to lose your position in the chaos and die as a result. If you can get the hang of the different camera movement, however, it gives you more options of play for the five worlds. However, there are no online options for this co-operative play. Maybe the game’s reliance on fluidity, and possible lack of it in online connections, means it hasn’t been included, but you’d expect games like Nex Machina to do so. You’ll have to stick to testing your skills against friends via the leaderboards than in online co-op play.

Nex Machina is up there with Resogun as the best game Housemaque has ever released and is a great throwback to the arcade shooters of old. In terms of presentation and design, it is perfect and its smooth, brutal, and challenging gameplay makes it feel wonderful to play. The small number of world are endlessly replayable and the competitive nature of the leaderboards will keep you coming back for weeks to come.