How to Get Power Girl in Injustice 2

Power Girl is the older, stronger, slightly more vicious version of Supergirl from Earth-Two. She’s still Kara Zor-L, Superman’s older cousin who was supposed to arrive on Earth right alongside him, only she has much more battle experience and a more mature look. She isn’t the innocent hero you may recognize from the CW show, or even from Injustice 2’s main story. You can unlock this version of the heroine to play as in a couple of ways. 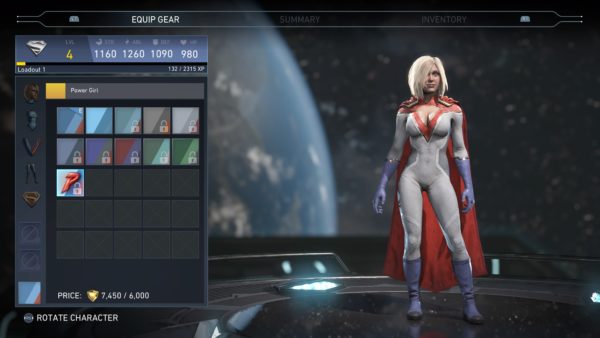 The first is to purchase either the Digital Deluxe Edition or Ultimate Edition (which cost $80 and $100 respectively) of Injustice 2. Both of those come with the premium Power Girl skin already unlocked. It not only changes Supergirl’s appearance but also changes her voice and grants new dialogue, too. If you only purchased the Standard Edition, you’re not out of luck. You can unlock Power Girl in-game by paying 6,000 source crystals or by obtaining it as a reward from a Multiverse event or other mode.

Once you unlock the skin, head into the customize character menu, choose Supergirl, then change her shader to this skin. She’ll retain all the specific stat bonuses and abilities of the loadout you assign this skin to too.

For more on Injustice 2, be sure to check out our wiki.