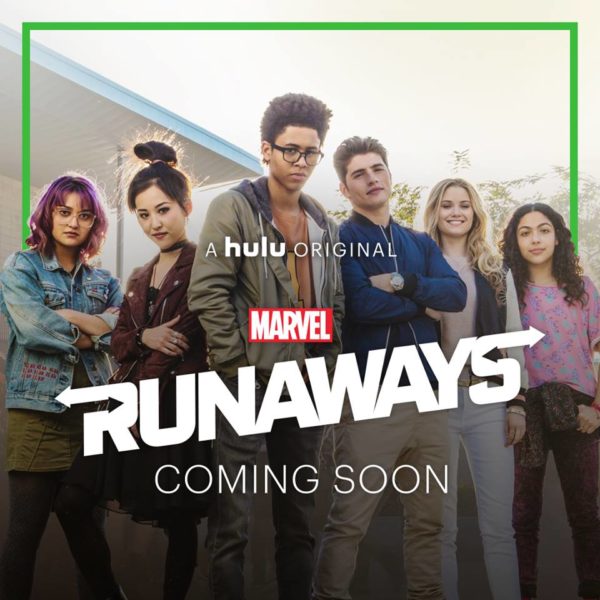 The Runaways. A gang of teenagers with superpowers who go on the run after learning that their parents are part of an evil organization called the Pride. Over time, the group of six become closer friends and a team. Thought the wacky group (which included Old Lace, a dinosaur) was beloved its readers, the Runaways still paled in popularity compared to major Marvel teams like the Avengers and X-Men. The team’s members made appearances in other Marvel comics. More recently, an alternative version of the Runaways showed up in Marvel’s Secret Wars.

Fans itching for more Runaways won’t have to wait too much longer. Hulu has officially made a one season order for Runaways, with the show premiering this Winter. Marvel has also released a character poster, featuring each member of the Runaways, though Old Lace is missing

While there were questions of whether the Runaways would be a part of the Marvel Cinematic Universe (MCU), the chances are highly likely. Actress Linda Louise Duan is credited in the recent Doctor Strange film as “Tina Minoru”, the mother of Runaways member Nico Minoru. While her appearance is brief, many Runaways fans also noted the staff she was holding looked strikingly similar to the Staff of One, a weapon usually associated with the Runaways.

While the MCU has introduced teams like the Guardians of the Galaxy, the Defenders, and the Agents of S.H.I.E.L.D. after the Avengers were formed, the Runaways will be their first teenage team, filling the void of a world without the X-Men. As a matter of fact, Molly is herself a mutant in the comics, though she was presumably be made an Inhuman for the MCU. Will you be watching?