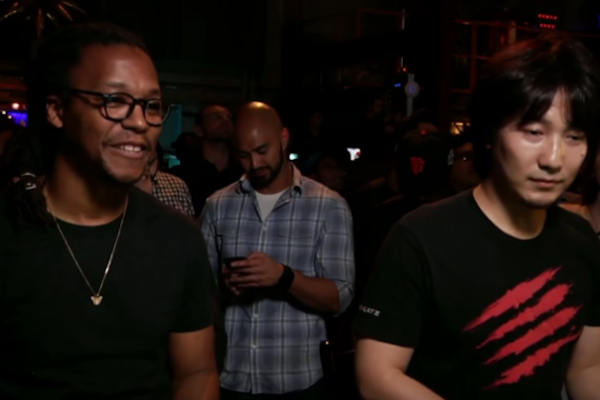 All week TBS has been hyping up a Street Fighter V showdown that would put eSports players to the side in exchange for some celebrity action. ELEAGUE let the real Street Fighter V players take a week off and instead filled their stage with the likes of hip hop star Lupe Fiasco, NBA legend Shaquille O’neal, NFL star Reggie Bush and WWE superstar Eva Marie.

The idea of seeing celebrities battle it out on the ELEAGUE stage during a game of Street Fighter V is certainly exciting news but, at the end of the day, anybody who has followed FGC news knew exactly what the outcome would be. Lupe Fiasco, unlike the other competitors on stage, is no stranger to Street Fightet V. He plays this game and he plays it well. He is the only celebrity who has achieved something that most professional Street Fightet V players would only dream of doing—beating FGC legend Daigo.

The first round pitted Eva against Shaq in a match up that actually showed the WWE star had some fighting game prowess. Unfortunately, her eSports journey was cut short and Shaq barely clutched victory with the help of his coach Tasty Steeve. In the next matchup, Reggie Bush actually managed to challenge Lupe’s Ken with a solid Zangief, but it just simply wasn’t enough. Reggie managed to score a victory against Lupe once he managed to properly utilize Zangief’s grab but some overzealousness towards the end of the match left him completely exposed to a player like Lupe Fiasco. The “Kick, Push” rapper managed to barely score a victory over Reggie Bush before he easily dominated Shaq in the finals.

In fact, he so easily beat the NBA pro that he filled the final performance with tons of taunts and even let Shaq escape from the multiple stuns he placed him in. Shaq’s Ryu was no match for Lupe’s far more advanced Street Fighter V skills and the match played out exactly how everyone thought it would. In all honesty, it seemed like Eva may have had the best odds at beating the hip hop icon but some shameless cheating by Tasty Steve in the first round robbed everyone of seeing that matchup go down.

Either way, there’s not much to truly be upset about. All the winnings went to the charity of the winner’s choice. In this case, a $25,000 check was signed over to M.U.R.A.L—Magnifying Urban Realities & Affecting Lives. So while the outcome was about as unsurprising as it can possibly get, there is still something special about seeing major sports veterans and hip hop stars on a TBS stage playing Street Fighter V for charity. At the end of the day, that type of all-star attention for a fighting game that has made its way to a nationally recognized stage is all that really matters.