New estimates compiled by SuperData paint a picture of a Virtual Reality market dominated by low-cost, low-barrier to entry headsets.

The data provided by SuperData, reported on by Upload VR, estimates that 6.3 million headsets were shipped in 2016, and 4.51 million of them were Samsung Gear headsets. Despite the high market share percentage, this isn’t completely shocking news considering the headset’s low price entry point (occasionally packed-in with phone sales) and the large amount of people who own compatible Samsung phones.

PlayStation VR is estimated to have shipped .75 million headsets, which is a pretty solid leg up on its non-Samsung Gear competition including the HTC Vive and the Oculus Rift. 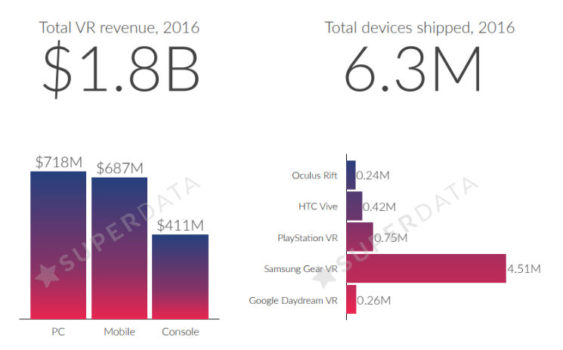 Virtual Reality is still very much uncharted territory, so it’s harder to predict how these headsets are going to fair ahead of time. Still, considering how niche the PlayStation 4 is (at least in comparison to the ubiquity of smart phones and personal computers), and how pricey it might be for some with its $400 price tag, it’s interesting to see the PSVR clock in at second place. Still, this is far below other earlier reports that said the PSVR was somewhere around 2 million shipped. This also includes a report from SuperData itself which put the PSVR estimates in that same ballpark.

At a glance, one could assume that Oculus is under-preforming considering its brand recognition and high profile status. However, those estimated shipment numbers could be attributed more to low supply, than low demand.

It’s important to remember though that these are just estimates, and no one other than Samsung, have actually revealed any hard numbers yet. So if it seems all kind of up in the air, it’s because it is.

We’ll have to wait a little longer to see if the market continues to grow for these headsets, or if it will fizzle out much like motion controls and 3D did in previous console generations.

Credit to NeoGaf for helping us find this