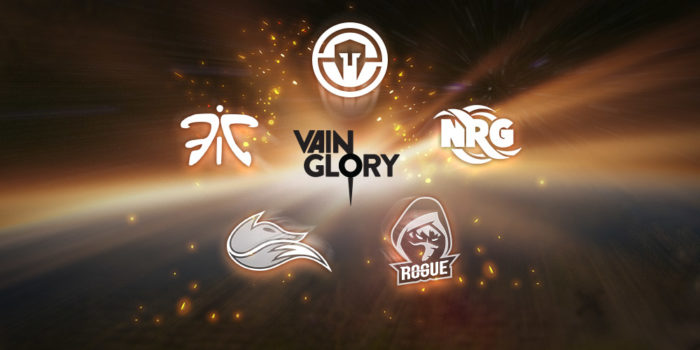 Mobile eSports is slowly gaining some traction. Five more eSports organizations have announced their presence for the upcoming Vainglory season, and all of them are major names. Fnatic, Echo Fox, NRG, Immortals, and Rogue will be making their professional debut later in March. They will be going up against stacked organizations already competing: TSM, Cloud 9, G2 Esports, SK Gaming, Team Secret, mousesports, and DetonatioN. All are familiar names to people following competitive play in games like League of Legends, Counter Strike: Global Offensive, or Dota 2, just to name a few.

The newcomers will warm up in a Preseason Invitational hosted by the game’s creators, Super Evil Megacorp on Feb. 26, streamed live on Twitch TV. While these organizations are new to the game, they each have had successes in other eSports and boast rosters with experienced players. Here’s a quick breakdown:

Fnatic: Based in London, Fnatic is perhaps best known for its League of Legends team. The season one world champions, Fnatic continues to be one of the top European teams. Fnatic can be found on League of Legends, Overwatch, Dota 2, CS:GO, and Heroes of the Storm.

Rogue: While relatively new, having been founded in 2016, Rogue has musician Steve Aoki backing them. They took home the biggest prize pool to date with their Overwatch team during the APAC Premier. Rogue is also currently forming a CS:GO team.

Immortals: During their first appearance in the sixth season of League of Legends’ North American League, Immortals surprised everyone by going 17-1, only dropping one game to Counter Logic Gaming. They ultimately lost to the beloved Team Solo Mid in the Spring Finals, costing them a split title, despite a strong showing. This continued, to be a trent, with Immortals having strong records, but failing to secure themselves a banner. Immortal can be found in League of Legends, CS:GO, and Super Smash Bros.

Whether you’re a fan of one of the older organizations or one of the newcomers, the presence of mobile titles like Vainglory as an eSport seems to be gaining traction. Vainglory is available free to download on iOS and Android. They start their competitive season in March.