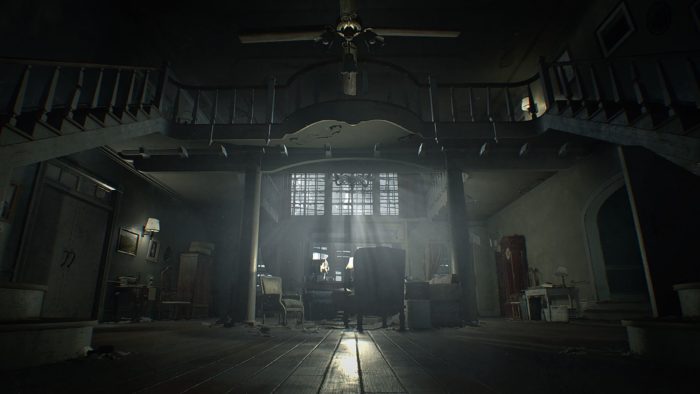 You record your progress with the tape recorder, take a deep breath, and decide it’s time to move along to the next part of your journey. Taking tentative steps towards the door, you press up against it, watching as it creaks open slowly. Your ears prick up a little, trying to listen for footsteps or anything else that could hint towards one of the crazy Bakers lying in wait for you. You even try to peek through the small crack you’ve opened up. There’s nothing in the next hallway, so you push the door wide open and step into the exposed environment. As you continue down the narrow path, the door you forgot to close shuts itself with an audible click. You jump in your seat.

With Resident Evil 7, Capcom has perfected the art of opening and closing doors in video games. What once served as a necessary loading screen for a game on the considerably less powerful PS1 hardware is now a sharpened tool used to craft and enhance an environment full of atmospheric tension and dread. With the adoption of the first-person view, the heartbeats you hear as you open the door no longer belong to Chris or Jill, they belong to you.

Set in the beautiful countryside of Louisiana, the game follows Ethan as he journeys to an old residence in Dulvey after receiving a message from his wife, who’s been missing for three years. She wants him to go get her, so he does. Upon arriving at the address provided by his missing wife Mia, he quickly discovers that the residence is owned by the Bakers, a kooky Southern family that takes pleasure in kidnapping unsuspecting tourists and torturing them.

Resident Evil 7’s tonal shift stems mainly from this setup; at a glance, it seems like you’re just dealing with a family of crazed murderers. Whereas past Resident Evil games typically placed you in environments overrun by monsters and the undead, here you’re mostly trying to escape from some really messed up human beings. It’s not too long before you realize that there’s more to the Baker family than just a bunch of crazy people. The Bakers are immortal, somehow, and there are these mold-covered monsters living in their basement. It’s almost as if these monsters were once human, mutated by some sort of virus or infection.

Despite its initial premise, series fans will quickly realize that Resident Evil 7 is a lot more ‘classic’ than they think. The Baker residence consists of a large main house, a guest house, an older estate, and a few other areas that you’ll unlock as the story progresses. The main house hides an abundance of secrets, and the game isn’t afraid to dangle coveted treasures (shotgun, anyone?) in front of players while keeping them just out of reach until you’ve solved an elaborate puzzle to earn your way in.

Not unlike the Spencer mansion of the original Resident Evil, the entire Baker residence is a puzzle in and of itself. Here’s a Scorpion Key, now go back to a previously searched area to unlock that one Scorpion door you couldn’t open before. Here’s a shotgun, now figure out how to actually leave the room with the shotgun without getting yourself locked in. There are even a couple of puzzles that involve grandfather clocks and telling the time. Resident Evil 7 takes so many cues from its original predecessor, and it doesn’t get anymore ‘classic Resident Evil’ than that.

But of course, there are also the Bakers to contend with. This is where Capcom looks back to Resident Evil: Nemesis and draws from the idea of having a foe that constantly stalks you, searching high and low for you. Instead of a large Tyrant, we’ve got psychopathic murderers. Obviously, trying to shoot them with bullets is futile; the game wants you to frantically search through rooms for that elusive emblem puzzle piece as you hear Jack or Marguerite’s footsteps draw ever closer. The sense of dread is palpable, especially with the knowledge that there’s no way for you to reliably eliminate these stalking hunters at an early stage in the game. The sections where you do have to hide in the corner and sneak around are relatively few, and the need to sneak is done away with in the latter half of the game, but they work well when implemented. Even if the AI can be easily tricked and dodged, the fear of not knowing when the Bakers are going to show up next is enough to send you into paranoia.

When dealing with the more regular enemy types, Ethan’s physicality and movement really come into play. It’s here that you’ll quickly find that Ethan isn’t some seasoned soldier who can run at breakneck speeds and swap swiftly between a handgun and shotgun as he pleases. He can move forward at a steady pace, he can sprint, and he can even perform a quick turn when the need arises, but his handling of firearms feels slow and clunky, adding to the heightened sense of dread. Ammo and healing items are scarce, reloading a gun and using a first aid drink take a couple of seconds – it’s not a problem outside of combat, but when these things add up, they make your fights that much more intense and stress-inducing.

Resident Evil 7 feels like a genuinely scary game because of its claustrophobic environments and the fear of whatever lies around the corner. Really, the horror of Resident Evil 7 works because it’s just so damn realistic. While many were possibly concerned about the series’ dramatic shift towards the first-person view, that perspective works for the game because it makes the player feel trapped. As much as I hate to use the word, there’s a sense of horrifying immersion that simply couldn’t be achieved with the out-of-body third-person view that would allow you to see everything in the vicinity of your player character. The simple act of opening a door wouldn’t be half as terrifying in third-person either.

The game’s eight-hour campaign may feel short, but it’s packed with memorable set pieces and stages, boss fights, and turning points. Resident Evil 7 is a fantastic horror experience the first time through, but subsequent runs of the game will see you hunting collectibles and beating the game in unique and challenging ways to uncover unlockable items. And if you’re brave enough, you could try your hand at the game’s Madhouse difficulty, which offers no checkpoints, no regenerating health, and offers up brand new enemy and item placements. The best part? You need to use cassette tapes to manually save your game. There’s a limited number of these, of course, so you could potentially ‘save’ yourself into a corner by running out of tapes. A true test of wit.

The only shame is that there’s not much else to do outside of the game’s single-player content. The fun and buck wild Mercenaries mode is gone, which is a pity, considering this could’ve been a prime opportunity for Capcom to reinvent and improve the fan-favorite horde mode on the current generation of consoles. Still, I suppose a no holds barred shooter fest mode with silly costumes wouldn’t really fit with the Southern gritty tone Resident Evil 7 has going on here.

As is the case with most Resident Evil games, you will eventually reach a point where the horror just starts to fade away. This is usually the point where you’ve gathered a good arsenal of weapons, including the iconic grenade launcher and magnum. This is where you’ve learned how to reliably defend yourself. It’d be a mistake to think of that as a fault, however. The game hasn’t necessarily gotten any less creepy or scary, but it’s at this point that it decides that the player has earned the right to feel strong. After all, you’ve braved through the horrors posed by the imposing Jack and insane Marguerite. You can only grow stronger from that.

As drastically different as Resident Evil 7 might seem at first, it hasn’t forgotten the original core message of the series. The protagonist’s predicament often appears bleak and dire at the start, but they’ll soon gain the strength to face and defeat the horrors of the situation they’ve been placed in. Regardless of the outcome, the Resident Evil games have always been about facing and overcoming fears, eventually giving way to a brighter and hopeful future (there’s usually a chopper and a beautiful sunrise involved, too). Capcom hasn’t forgotten that message, and handles it with appropriate amounts of bombast and finesse with this latest entry.

In closing the door on the action-packed direction of the past three main games, they’ve opened another that could possibly lead to a familiar yet exciting future for the series.