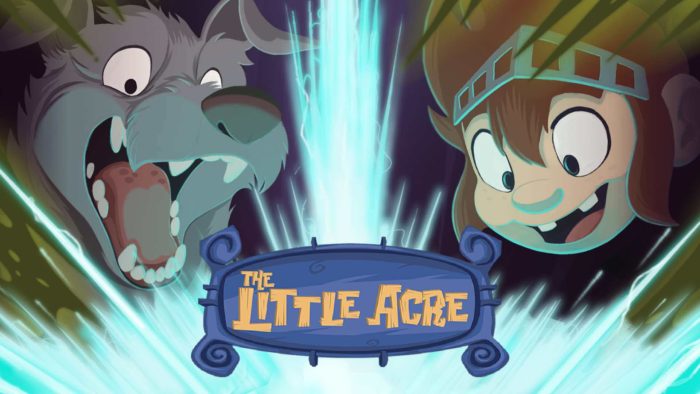 The Little Acre on PC

A certain kind of gamer’s nostalgia: sun streaks through shuttered slats or drawn curtains, as a console whirrs; cereal piled high colors milk a sugary shade; Saturday morning cartoons and video games transport you away to a place called the weekend. There’s that same warmth in the hand-drawn art style of The Little Acre, an indie adventure game from small, Dublin-based studio Pewter Games. That warmth will move players who fondly recall the great point-and-click adventure games like Day of the Tentacle, Grim Fandango, and Broken Sword.

In fact, those games have more than a spiritual stake in The Little Acre. The game’s Steam Greenlight page is cluttered with support from the likes of Lee Petty and Greg Rice of Double Fine Studios, and Charles Cecil, the creator of the Broken Sword series, came in as Executive Producer on the game. What we end up with is a charming point-and-click done in the classic style, brought to life by loving animation and art.

The game’s setting is charming: the rolling, damp hills are effulgent, an unmistakable product of Irish folk tradition. Your time is spent with Lily and her father Aiden, and the adventure zips between the two of them. Set in an Irish country idyll in the 1950’s, the eponymous Little Acre cottage is home to the two, along with their eccentric father and Grandfather Arthur, an inventor who has disappeared.

The first thing you’re tasked with is to get out of bed, so it’s pretty relatable stuff really. Of course, this being a Lucas Arts-style adventure game, that’s no simple feat: it involves scouring around for clues and items, and the shuffling of your brain outside the box of the logical and into the daft arena of the lateral. There’s a lot of trial-and-error, and it’s the sort of stuff that once upon a time had you scratching your head before you start to throw everything in your inventory and see what sticks. Brute-forcing can side-step a lot of frustration, but flipping through your inventory and firing off possible solutions like a trigger-happy Professor Layton does become grating.

Fortunately, The Little Acre does benefit from a scaled-back approach, the sort of approach that de-clutters what would be a crowded inventory screen and a crowded space to explore. The number of objects that are interactive is lower than you might expect. This means that you never have more than about four items to test out. This de-clutters the problem but it doesn’t solve it. I was often still leaning on an arbitrary approach that stripped me of the dopamine glow of the light bulb moment. With some of the best lateral puzzles, the solution made an odd sense in my mind; there was  a link somewhere, if very tenuous. But at several points in The Little Acre, the solutions feel random. I felt nonplussed in the face of my progress because it was inevitable, because trial-and-error is what got me there. The random approach is what enabled me to carry on, and it’s not an encouraging way to feel about gameplay.

The clashing of art and commerce is as brutal as it is boring, and the idea of ‘value for money’ seems daft when you’re talking about experiences – how much money would you ascribe to glancing at Picasso’s Guernica? What does that even mean? When it comes to video games, less than two hours of play time shouldn’t be met with a full $60 price tag. This one isn’t: The Little Acre will be $12.99 on release, and that’s a fair price. You’re in for something that’s as short as it is sweet – which is to say, very.

While shortness on its own isn’t a criticism, being greeted by the credits shouldn’t feel like a gut-punch. The story here isn’t so much wrapped up as scrunched up, with a ribbon hastily tied around all the loose ends before you’re sent to the rolling credits. I’ll wager that even if you go in forewarned of its end, you will produce a slightly miffed and startled ‘hmph’. It’s a real shame when something makes a hash of the endgame and sadly, The Little Acre does fall short here.

And on that sweetness, if you’re of a certain disposition, you may have a good time here while it lasts. If you feel a chest pang at early Disney, at Don Bluth style animation, at Saturday morning cartoons, and at days spent in languor playing Grim Fandango and Broken Sword, then you know where you are with The Little Acre’s style. Unfortunately, actually playing the game is the least compelling component on offer.

The puzzles are very simple and the set-up and plot have all been done before. The lovingly-crafted animation, uncluttered play, and warm, sharply-written characters could have converged onto a winner here. Sadly, though, there is the distinct feeling that Pewter Games have made a test balloon, a game that teases something bigger yet to come. For all the fondness you might have for it, when the credits roll after what feels like the end of part one, the game is regrettably very aptly named.