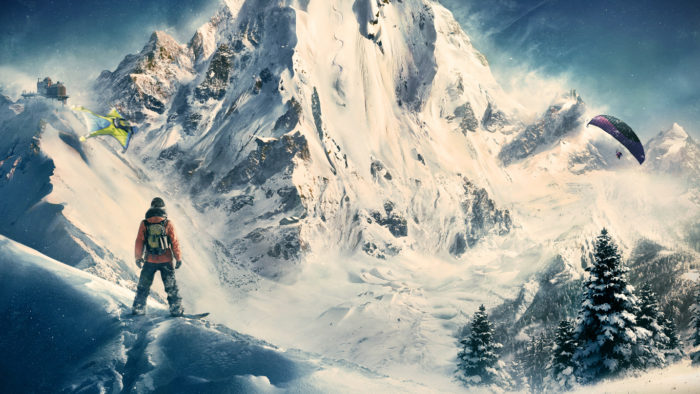 Steep is a unique, but also strange game. Other than featuring snowboards, it shares very little else in common with the popular SSX series of games which is the series most people probably think of when they think of winter sports. Pulling of absurd tricks isn’t really part of Steep’s DNA. Instead, it’s about living out your winter sports dream with your trusty GoPro camera on a fantasy version of the Alps filled with endless amounts of lines through varied locations such as villages, mountains, woods, and even a glacier. It’s an admirable effort, that for the most part works, but some issues, both technical and design in nature, hold Steep back from reaching its full potential.

Steep has very little narrative direction, which depending on who you ask may be a good thing. After a brief tutorial, players are left to explore a massive mountain using four different disciplines: Snowboarding, Skiing, Wingsuiting, and Paragliding. You provided with a hefty amount of challenges to start, and you’ll unlock a ton more as you slog your way through them. Across all four disciplines, there are events such as traditional races through check points, trick competitions, and daredevil challenges where you’ll have to score points and survive through difficult conditions such as rocky terrain or thick woods. When you have something like 100+ challenges, there are bound to be some hits and misses. There are some thrilling tracks that I could have played over and over again to perfect my score, and others that are poorly designed, cheap, and frustrating.

Adding on to that frustration is that Steep’s trick controls feel inconsistent and unresponsive. There are moments where a ramp couldn’t look any juicier, I time out the perfect jump, and then… I launch just inches into the air and get nothing out of it. Even worse than just perplexing physics, I encountered bugs where I would just sink or get stuck in terrain that I shouldn’t have, like a wooden roof. It’s not frequent, or egregious enough that it ruined the game in anyway (and nothing a quick respawn couldn’t fix if I was totally stuck in something), but it still sucks that it happened at all.

That same inconsistency rears its ugly head again when it comes to control and landing. There were times while reviewing Steep where I got massive air, pulled out a trick and left myself plenty of time to land properly and unfortunately still fell due to the impact of the landing which made sense… except that there were also times where I landed perfectly fine on a similar jump, leaving me perplexed. There might be a science that explains all of the inconsistencies, but it’s not well enough explained and it is bound to frustrate the average fans that pop in and are expecting to land tricks the same way they do in other winter sport games.

Challenges are what make up the bulk of the game, so keep that in mind when deciding whether Steep is for you, but they aren’t the only things to do. Exploring the mountain’s open world is a big part of what makes Steep stand out from the competition and is one of the most enjoyable parts of the game. It’s seriously huge, and you can use any of the four disciplines whenever you want to get around and explore. You have a pair of binoculars, and you can use them to survey the land, and spot out new hills/lines for you to ride down which unlocks more challenges.

There are also 30 or so mountain story challenges which are tracks designed to take advantage of a particular line’s “personality” of sorts and contain some of Steep’s most memorable moments. For example, weaving dangerously close to a cliff in my wingsuit while Flight of the Valkyries plays. Or, more therapeutically, being simply told to just get from one end of the line to the other (which was really far by the way), and being able to traverse this challenge through any path, by any means that I wanted was a cool moment of freedom. I paraglided as far as as I could, landed, whipped out the skiis through some flatter terrain, and then broke out the wingsuit to make up some time once I came to steep drop.  All the while, the vista was gorgeous. Steep is a pretty game and finding those moments of freedom and beauty is where Steep really pulls its weight.

In Steep’s open world, you’ll also come across other human players. Without grouping up, you’ll play against nothing but AI place holder ghosts in the game’s challenges. Luckily, Steep makes inviting someone as simple as a button press which can be done without having to even leave the action. When in a group, you’ll share discoveries and challenges that you can set up yourself, along with your best scores/times in different challenges.

The presumed vision of a winter sports utopia the game’s developers had for Steep really comes together when you’re playing with others. It was a blast going through lines together, posting high scores for each other to beat, and when we would get bored of one challenges, just fast travel over to somewhere else in the mountain and do something different. Steep is meant to be a social experience and if you’re not playing it that way, then it’s really not much more than a list of challenges to go complete which is fun enough… but it’s not going to last you forever.

Finally, you can make yourself stand out in Steep’s open world by customizing just about every aspect of your character’s attire. Everything down to new mittens, gear you carry on your side, wingsuit color, snowboard, etc., can unlocked and used for customization either through purchasing with your in-game currency or unlocking them through challenges. You can’t change anything about your actual body though except from selecting from a couple of preset people which is a bit odd… but considering you’re going to be covered head to toe in winter gear anyway, it’s kind of a moot point.

Steep wants to be a game that is the next best (and safest) thing to being one of those super-expert daredevils that actually go down insane hills without dying somehow. You can get the GoPro view on everything you do, and share it directly to YouTube. Steep is about living out that fantasy, NOT about racking up a crazy trick score combo while spinning your snowboard around like a helicopter over your head.

There are some people that want/expect to do straight up silly tricks, and will find themselves disappointed with Steep. Even those that know what they are getting themselves into might get bored or frustrated with some of Steep’s design choices. That said, the developers deserve credit for trying something different instead of just being another SSX clone. If you are willing to fully embrace and appreciate what makes Steep unique, namely its take on group play, the ability to create your own authentic looking videos, and freedom to explore a mountain at your own pace, your trip to the Alps will have been one worth taking.