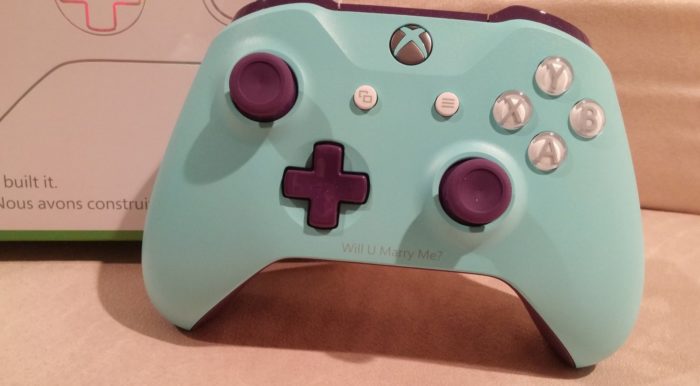 Back in November, Twitch streamer Raymond Cox, or Stallion83 as he is known online, was the first player to ever to reach a one million gamerscore on the Xbox 360, a feat that took 11 years to complete.

It appears his love of the Xbox 360 and Xbox One consoles has seeped over into his personal life as well, with an announcement on Twitter stating he has unlocked another, much more life-altering achievement.

Using the Xbox Design Lab wherein player can customize their own controllers with over eight million different color combinations along with possible engraving options, Cox created a beautiful light blue Xbox One controller with purple buttons with a questions etched along the bottom, “Will U Marry Me?”

She said yes, folks! Wonderful news for Cox and his SO who we wish all the best. Now that Cox has his one million Gamerscore under his belt, this seems like a fitting next set of achievements to pursue. Next up, planning the wedding! That’s got to be worth 300G at the very least.

You can check out Cox on his Twitch page, where he streams his achievement hunting adventures for all to see.