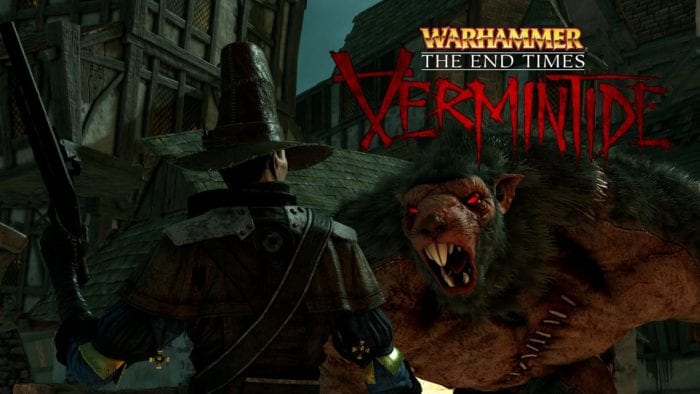 It’s hard to look at developer Fatshark’s Warhammer: The End Times – Vermintide and not think that it’s trying to rip off Valve’s successful co-op shooter Left 4 Dead. Both games have similar structures and even some enemy types that behave in the same way, yet Warhammer doesn’t feel like a carbon copy. In fact, Fatshark has not only deepened the four player co-op game, but also delivered a memorable and challenging experience along the way. This does come at the cost of a few missteps, but Warhammer: The End Times – Vermintide delivers one of the most entertaining co-op titles of the year.

Taking place in the Warhammer fantasy universe, the end of the world has come and a swarm of anthropomorphic rat people called Skaven have begun to lay siege to the city of Ubersreik. It now falls on the shoulders of our merry band of heroes, which is made up of a witch hunter, dwarf, witch, elven ranger, and crusading knight to push back the Skaven and reclaim the city. Vermintide is full of fantasy tropes, but thanks to the rich and fleshed out world of Warhammer they never feel like paradoxes or cliches of the genre. While the story is only really told via some text overlay, in-game banter, and the rare cutscene, Vermintide is a rather easy game to follow.

This is mainly to its benefit since you will spend most of the game surrounded by giant rats wielding all sorts of weapons. Vermintide is comprised of a prologue and three acts, each of which contained a handful of 15 to 20 minute-long missions. These can range from a ‘get from point A to point B’ mission to having to climb a tower and signal for help via a massive horn. It’s a bit disappointing that Vermintide plays it safe with its missions, as it doesn’t always feel like it’s tapping into the world and setting around it. Sure, you do get some cool areas like an abandoned dockyard and wizard’s tower, but they never feel as if they’re used in any meaningful or new way. Which is a shame because the level design itself is top-notch and there’s a healthy level of detail for those who want to scour every inch of the rather linear maps.

However, you won’t be able to search these maps for long until the horde of Skaven catch your scent and run you down. Make no mistake, these enemies are not mindless zombies and their ability to use weapons is felt instantly. This makes combat, especially of the melee variety, far more intense and interesting since you are able to block, stagger, and dodge out of the way. While all of the classes do have ranged weapons, most of your time will be spent hacking away at vermin until your screen is covered in black blood. It’s an interesting change of pace and makes the combat far more personal than say a game that just gives you nothing but guns. However, don’t expect to pick up any weapons in the missions themselves as your heroes are relegated to what gear they takes with them, aside from a few bombs scattered throughout a level.

It’s at this point that Warhammer: The End Times – Vermintide breaks from a formula as it adds a rather deep loot and progression system. Gear can be smelted down into other weapons of a higher rarity or you can simply upgrade the weapons currently in your possession. There’s also an enchanting station that allows you to roll new properties for weapons and armor such as extra ammo for pistols or a chance to poison on hit. This adds an interesting layer to Vermintide as it gives users the ability to customize their character to their preferred play style. All of this can be earned by either breaking down whatever items you have or earning it through a roll of the dice at the completion of each mission. However, you currently cannot transfer items across heroes, which can be frustrating if you are randomly given a weapon that doesn’t work well with your hero.

Speaking of the five characters, each of them have fantastic visual designs and will consistently interact with each other during a mission. While they only have a handful of lines for each level, it doesn’t make their banter any less enjoyable for some of the game’s slower moments. In terms of mechanics, they all have various strengths and weaknesses that can really shine in hectic moments. Whether it’s the Witch Hunter’s ability to fire off a volley of pistols at once or the drawf’s shield bash, it all allows Vermintide a thoughtfulness when constructing a group together.

Yet, trying to get a group of players together may be the biggest problem of Warhammer: The End Times – Vermintide thanks to highly inconsistent wait times. In my time playing, I’ve spanned a gambit that ranged from within a minute to a solid 15 minutes of just waiting for the game to connect. Now this has been adjusted slightly with the most recent patch, but its effectiveness is still mixed. In addition, the ability to search for specific missions is not nearly as streamlined as it should be, as you’ll need to go through several menus just to disable what maps you don’t want to have in the queue.

Warhammer: The End Times – Vermintide also suffers from some bugs, namely the occasional pop-up textures, floating enemies, weird character animations, or items not registering when you go to pick them up. While I experienced no hard crashes, my team did come across a lone Skaven that was completely invincible to our attacks and essentially chased us through the entire level. These are not deal breakers by any means, but Vermintide could have used a few more months of polish before its full release.

For those looking to ramp up the challenge, switching the game’s difficulty is a surprisingly drastic change and forces completely different forms of play. Ammo becomes a truly vital resource, most melee battles are incredibly coordinated, and most teams will try to avoid enemy patrols that prowl the streets. It’s an interesting alteration that almost turns Vermintide into a stealth/action game, rather than a straight up hack and slash. Getting the needed gear to actually beat hard mode levels may take some time, but this adds to Vermintide’s replayability.