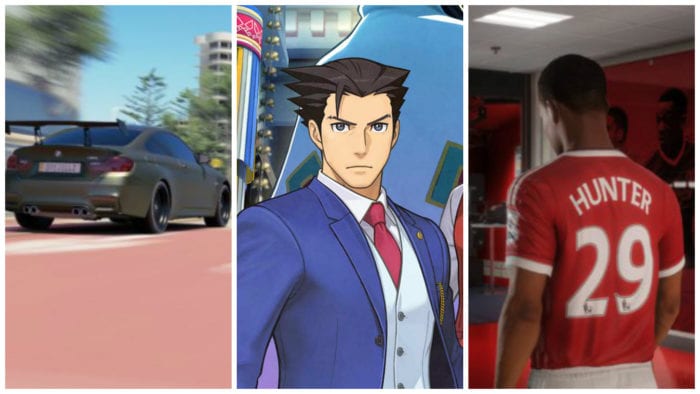 Assistant Editor Hayes Madsen: Spirit of Justice takes Phoenix Wright to a brand new setting, the mystical and religious land of Khura’in. This unique setting helps breathe new life into Ace Attorney, providing some nice twists on gameplay as well as a cast of new characters. The stakes are raised even higher for Phoenix this time around, as a law in Khura’in, called the Defense Culpability Act, means that a defense lawyer suffers the same fate as their defendant.

While Phoenix is taking care of business in the far-off country, it’s up to Apollo Justice and Athena Cykes to hold things down back home, and the two storylines converge in an interesting way. Spirit of Justice is one of the best entries in the Ace Attorney series with witty writing, plenty of twists, and a surprisingly emotional story.

The switch to EA’s Frostbite engine and the addition of a story driven mode called The Journey, freshens up the gameplay whilst adding something FIFA has always needed, a single player mode to sink your teeth into.

The engine change has dramatically improved the visuals, making the stadiums, pitches, and players look far more realistic. Players are also more intelligent in attack, more physical in defense, and more composed in front of goal, creating a much more authentic simulation of the sport. The Journey’s tale of a young player attempting to make it in the fiercest league in the world is detailed, well-written, and authentically performed by its excellent cast.

On top of these changes, everything FIFA is known for is still there. The compelling Ultimate Team mode that makes you obsess over every detail of your squad, the deep career mode that tests your abilities as a manger, and Pro Clubs that gives you and your friends a chance to play together whilst improving as an individual. FIFA 17 offers a ton of variety and made the right improvements in gameplay to make this year’s iteration a huge success.

Features Editor Ishmael Romero: Forza Horizon 3 was expected to be good. Here is one of the Xbox One’s major franchises, a spin-off of one of the best racing games on the market right now, set in an open world Australia that players can race around alone or with friends. If the first two games in the series were anything to go by, it was safe to assume that wild challenges and gorgeous visuals awaited fans. However, what Forza Horizon 3 eventually delivered far exceeded expectations.

The formula that has carried Forza Horizon to its third iteration has always been a solid one. Give players a beautiful country to drive around, throw in a large roster of finely tuned vehicles, and add in some Drivatars to give races against the AI a bit more of a human element. What helps lift this latest game head and shoulders above its predecessors, however, is that it puts you, the player, in control of the festivities. You decide how the Horizon festival expands, what new lands you adventure next, what types of races occur, and what class of cars are hitting the road. There’s even rally and scramble races (which mix terrain for challenging races that are way more fun than you’d think), to break the monotony of the usual fare. That control extends to how you customize your vehicle’s appearance and tuning, adding some much-appreciated depth to the popular arcade racer.

The developers have managed to find that sweet spot that offers accessibility without relying on overly simplified gameplay and content. The open world is inviting and easy to get lost in as you complete races and unlock more events and cars to drive. That alone is worth the price of entry. However, if you’re the type who wants more, the control of the whole festival as well as the tuning tools given to every player pushes Forza Horizon 3 over the top. The racing genre is nothing new, but Forza Horizon 3 manages to make it feel completely fresh as it opens up the Outback for one of the greatest driving adventures I’ve ever seen.

That does it for our September 2016 Game of the Month round up. Congratulations to Forza Horizon 3! What were your favorite games this month? Let us know in the comments!