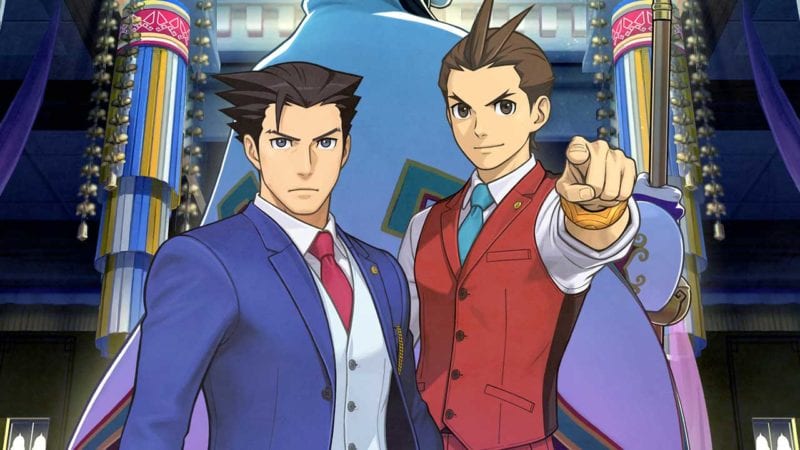 It’s amazing to think that a video game series about courtrooms and lawyers has been so successful for almost 15 years, but Ace Attorney is just that series. Phoenix Wright: Ace Attorney – Spirit of Justice is the sixth main entry in the series, and it changes things up with a new setting, story and even a few new features. For the most part, Spirit of Justice does feel like a fresh new experience for the series, and its charming cast of characters are what really drive the experience forward.

Spirit of Justice sees our favorite defense attorney, Phoenix Wright, return along with everyone else as the Wright Anything Agency. The game starts with Phoenix traveling to the foreign country of Khura’in to visit his old assistant, Maya Fey, who’s been performing spiritual training in the country for two years. While Phoenix is away his employees, Apollo Justice and Athena Cykes, are left to hold down the fort back in America.

Khura’in is a distinctly different setting than what we’ve seen for the series, as its a country built upon religious beliefs and worship of the religion’s founder, The Holy Mother. As such the country is ruled by a royal family, and these religious beliefs play into every aspect of their society, including the legal system.

No sooner has Phoenix set foot in the country, then the young boy Maya set up as his tour guide Ahlbi Ur’Gaid, pun intended, is accused of murder. Our protagonist rushes to the courtroom to see the proceedings and finds the boy accused and sentence right off the bat, which is where the attorney steps in to defend him. Court proceedings are very different in the Kingdom of Khura’in however, as something called the Divination Seance allows the royal priestess to see the last moments of a victim. Alhbi also hasn’t been given an attorney for defense, as there are no remaining attorneys in the country, only the prosecution is present during trials.

A law called the Defense Culpability Act has made it so that if a client is convicted guilty, the defending attorney is then convicted of the same crime, which usually results in lifelong imprisonment or death. This fact immediately sets the tone of how the five cases in Spirit of Justice play out, with the odds stacked against our protagonists more than ever before, and their own lives literally on the line. Things are wrong in Khura’in, and its up to Phoenix Wright to defy the odds and set things straight.

The catch with Spirit of Justice, though, is that this game is as much about Apollo Justice as it is about Phoenix Wright, if not more. The first case of the game is played as Phoenix, while the second focuses on Apollo back home as he deals with another life or death situation. Phoenix does take the spotlight again during the game and he plays a vital role for the rest of it, but much of Spirit of Justice actually focuses on Apollo. There are aspects of the characters’ past revealed, and it turns out that Khura’in factors into Apollo’s life in a huge way.

In usual Ace Attorney fashion the five cases of the game are mostly self contained, but they do also tie into a larger story, and boy is it an interesting one. Unrest has grown with the current legal system in Khura’in and a group called the Defiant Dragons have started a revolution. Most of the cases set in the country do revolve around conflicts or clashing ideas of the ruling royal family and the rebels, but the two tie in more than you might think.

As you advance through each case, more and more about the overall plot is revealed, and as the pieces really start to fall together it becomes a fascinating story. Things tie in nicely with each case, with the exception of case four, which feels more like a filler case, even if it does have some fun moments and surprising turns. Revolutions, seances and royalty are not things that Phoenix Wright has experience with, but it’s fun to see how he reacts to them. Surprisingly, a few of the cases even take a surprisingly emotional turn at some points, that are truly heartfelt.

Prominent characters of the Ace Attorney series return for Spirit of Justice, of course everyone at the Wright Anything Agency, but also Phoenix’s old assistant Maya who was absent in the previous game Dual Destinies. There are also prosecutors and detectives that make a return through various points. It’s great to see so many characters from across the Ace Attorney series return and interact with each other, in addition to new characters. For however different Khura’in may feel from the setting of other Ace Attorney games, the characters introduced there feel right at home.

Each has their own quirks and eccentricities, like the royal priestess Rayfa who refers to Phoenix as “barbed head” or the crazy rebel that constantly gets himself arrested and loves it because he gets free meals. There’s also a brand new prosecutor introduced named Nahyuta Sadmahdi, who plays a role in every case and believes in reading victims their last rights during trials along with defeating “putrid” lawyers. The characters of Spirit of Justice are as vibrant as ever, with their eccentricities represented in not only the well written script but their over-the-top animations as well. Each case also starts with a slick anime cutscene introducing the events and characters.

The Khura’in characters feel unique and separate from the ones we know, making Phoenix and the others look and feel even more out of place in the spiritual Nepal-like country. The music also plays a big part of this differentiating feeling, with tunes having a sound similar to what you’d expect from folk music in the Nepal or Tibet region.

The new setting can also factor into gameplay, forcing you to consider aspects about the religious rites and procedures of Khura’in. The Divination Seance is also used as gameplay mechanic, showing you the scene of the victims death. As the scene plays out words pop up on screen with different sensations of sight, hearing and touch. The royal priestess also gives testimony of what the victim experienced, and your job is to watch the scene and find contradictions between it and the testimony. You can pause the scene that plays out, flip between each testimony and then pick out the sensations that doesn’t match.

Beside the Seance, the rest of Spirit of Justice’s gameplay is what you expect from an Ace Attorney game. There’s a ton of text and story exposition, and the game is split into the usual two parts of investigation and trial. You can travel around to different locations investigating and finding evidence for each murder before the trail. Then during the trial your job is to listen to witness testimony, and use your evidence or logic to point out discrepancies and issues.

Gameplay elements from across the series also return, like Phoenix using his Magatama to undo psyche-locks that people have for information, or the therapy sessions that Athena uses to find discrepancies in witnesses’ emotions. In some regard it can almost feel like there’s too many unique gameplay elements, with some of them not serving as much of a purpose as they did in the past, and almost feeling out of place.

During trials there can also be leaps in logic and the presentation of evidence that make things unnecessarily difficult. For the most part finding contradictions flows well, but sometimes it can boil down to randomly picking between multiple pieces of evidence that could make sense in a situation. This can lead to frustration at times if you end up failing and have to start the case over from the beginning.

Spirit of Justice’s new setting and characters really are enough to make the game feel fresh, even if most of the gameplay is what we’ve seen before. It’ll be interesting to see where Capcom takes the series, along with Phoenix Wright and Apollo Justice, considering the resolution of everything in the game. Fans of the Ace Attorney series should find an enjoyable new adventure with their favorite characters, while newcomers may find a good entry point in with the new characters and setting.