For the number of times video games have dropped us into the battles of World War II, there’s been a serious lack of titles taking us to the warzones of the first World War. Maybe it’s because of the brutality of the war, or the primitive technology, but there’s only a handful of titles set in this historic period. Battlefield 1 splits off from the modern settings of its predecessors in favor of a setting right in the heart of World War I, and for the most part it manages to nail its setting. The two parts of the game, campaign and multiplayer, feel very different and almost like two separate games at points, but each succeeds in its own way.

Battlefield 1 has a distinctly different look and feel from most shooters we’ve seen over the past couple generations. True to reality, the weapons and machines of World War I are far more primitive and visceral. This translates to oftentimes crude looking guns, ramshackle tanks, and of course longer reload times on weapons. If there’s one thing the game really nails, it’s the setting. Barbed wire and decimated buildings dot every battlefield in the game, soldiers wear the proper uniforms of their country, and as battles progress, the field becomes ever more twisted and unrecognizable.

It’s clear that DICE wanted to convey the horror of World War I not only in its story and themes, but even by how battles look. Explosions leave gaping holes in the ground that you can seek cover in; as battles progress it kicks up smoke, ash, and dust, making conditions that are incredibly hard to see in. It’s the little touches like these in Battlefield 1 that really make it stand out. 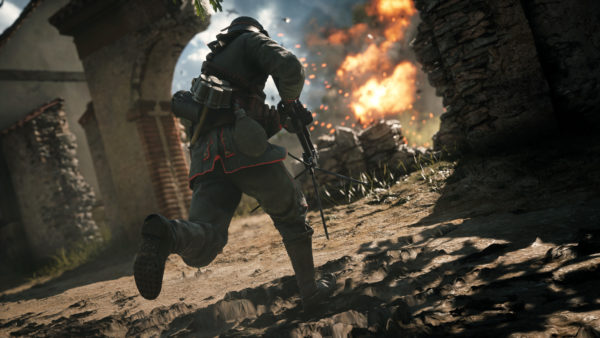 Before being able to hop into anything in the game, you play through an incredible opening segment. Here, you’re introduced to the brutality of combat in World War I, and take the role of different soldiers fighting for their lives. Inevitably, quite a few of the soldiers you play as will die, as a name and life bar pop up on screen, then the camera zooms out and shoots you down into the shoes of another soldier on the battlefield.

It’s a masterfully thought out segment that highlights the sacrifice made by so many soldiers, while simultaneously teaching the player the different aspects of gameplay. It ends with an informative voice over on the war that also tries to end things on a more hopeful note. This opening manages to hit some emotional notes that surprisingly pop up again at various points in the campaign.

From the main menu of the game, you’re greeted with separate tabs of home, multiplayer, campaign, soldier, store, and more. The home tab fills you in on tips and tricks for success, while the others should be fairly self explanatory. 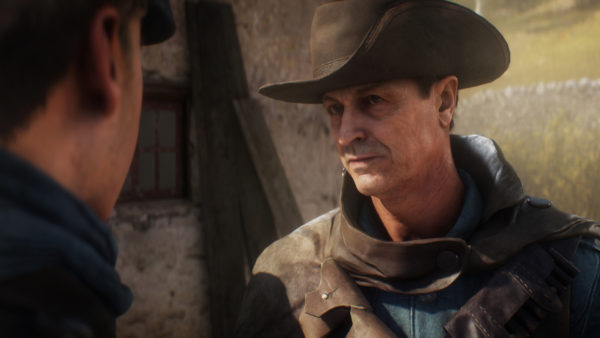 Battlefield 1’s campaign is structured quite a bit differently from previous games in the series. It doesn’t tell one concurrent story set during the war, rather opting for five episodic kind of tales that each focus on different soldiers throughout various points of the war. All five of the “war stories” as they’re called are incredibly varied in both their gameplay and story, switching things up with different styles and characters of different nationalities. One has you taking control of a soldier in a tank crew, while another has you assume control of an ace pilot. The pacing can differ between each of these stories, as well as the length, although overall they’re all pretty short and clock in at only two hours at most.

Separating the campaign turned out to be a great decision for the game however, as it allows Battlefield 1 to tell some emotional character stories without getting bogged down by an overarching plot. Some of the war stories are definitely better executed than others, but they’re all short and sweet. My personal favorite has you taking control of an insurgent in Arabia named Zara Ghufran, helping the famous Lawrence of Arabia battle the Ottoman Empire.

This particular story has you sneaking around enemy bases to kill commanders, and it’s surprisingly open, allowing you to approach situations with stealth or combat any way you see fit. The pilot war story also ends with an unforgettable aerial battle above London. Battlefield 1 does a surprisingly consistent job of reminding you how the war changed people, and keeping things realistic and emotional, which by and large succeeds. It’s a far cry from the campaigns of previous Battlefield games.

Of course, for many, the main attraction of Battlefield 1 is the multiplayer. The game’s multiplayer also tries to properly represent World War I, albeit in very different ways from the campaign. It also features a diverse and engaging selection of modes that can easily keep you busy for a while. You have the selection of modes expected from a Battlefield game, with Conquest having you hold a majority of flags on the map while eliminating the enemy, Domination having you capture and hold flags, Rush having you attack or defend telegraphs, and Team Deathmatch. There’s also a fun twist on capture the flag that has both teams hunting down carrier pigeons on the map and holding them for an amount on time in order to send a message to your team’s artillery.

The most interesting mode of all, however, is the brand new addition to Battlefield 1 known as Operations. These matches are multi-tiered rounds that have one team attacking to take multiple sets of points, and another defending. If the attacking team manages to take all the points and win, then both teams will move on to another map, and one of the Operations even has three different maps.

These 64-player matches also give you access to all the vehicles, tanks, and options you’d have in other modes. The attacking team has three battalions to attempt an assault with, basically three tries, meaning Operation matches can last a while, all things considered. These are huge battles with so much going on at once, and they almost feel on scale with what you’d see out of a real battle in World War I. 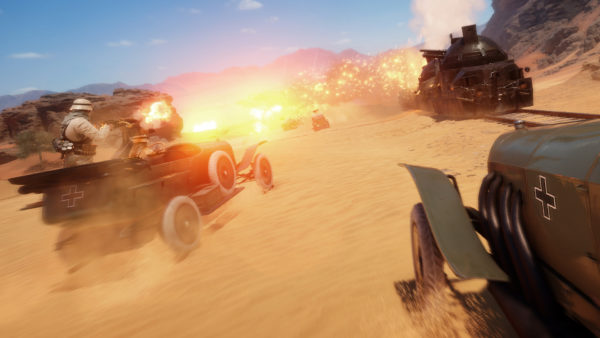 Whistles blare as the attackers charge, bullets and explosions pound you from every direction, and it’s a constant rush to safety. Operations and other modes are intense and suitably grand in scale. Of course, this is all backed up by the tight and fluid gunplay that Battlefield does so well. The rifles, machine guns, and other weapons of World War I definitely feel a bit different from the series’ modern entries but it all works well together.

You’ll need to account for the extra recoil and reload time on guns, and new additions like gas grenades, gas masks, and horses make Battlefield 1 feel distinct and unique. It all compiles into a stressful and hectic battle experience that can be fun and rewarding as well. Ranking your soldier up gives you war bonds that you can use to purchase new weapons and equipment in order to find your own style.

Battlefield 1 is also a drop dead gorgeous game, filled with both majestic landscapes and hellacious burning battlefields. Sometimes this difference can be jarring, but the game is truly a wonder to look at both in campaign and multiplayer. Explosions fill the entire screen, and the sound design works just as well to get you into the setting. Bullets whiz by clacking against stone and earth, while planes fly overhead and you’re constantly bombarded with the shouts and screams of both allied and enemy soldiers. The soundtrack for the game is filled with some stirring songs to get your heart pumping, that sound like they’d be right at home in a dramatic war movie. 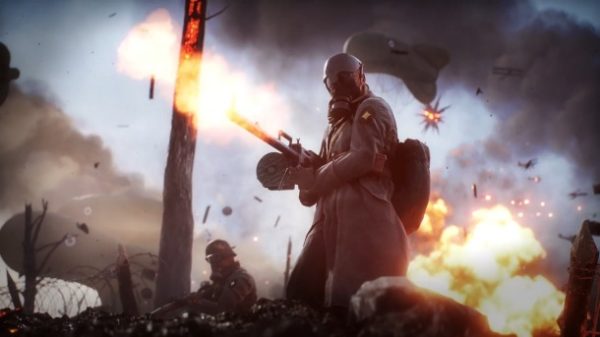 Over the course of about 15-20 hours with the game’s multiplayer, I only encountered a few instances of bugs or crashes. Sometimes my character would hitch and get stuck on the landscape, and my game froze while trying to join a match a couple times. The technical issues weren’t something that really got in the way of my experience, although issues like bad spawn locations might pop up here and there. I did, however, experience quite a few more bugs in my time with the campaign. More than once I had visual glitches that saw my character buzzing around the screen or getting stuck on the environment. It happened enough that I could start to make note of it after a while.

Battlefield 1 is a hugely refreshing take on not only the series but the shooter genre in general. It’s exciting to see the series explore such an underused time period in video games, and properly represent not only the insanity of battle but the horror of it all as well. It features the best campaign the series has had in years, if not ever, and the multiplayer improvements DICE has been working on for years on top of new additions. The developer’s vision was clear with Battlefield 1, and they executed it well on all fronts.