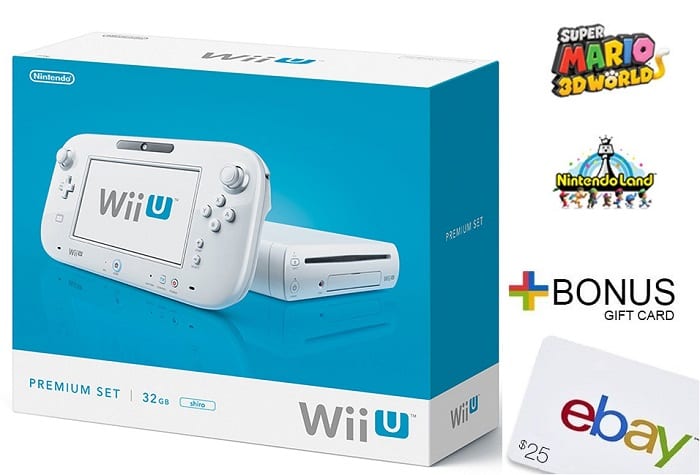 While all the hubub about Nintendo on the interweb tends to focus on the new NX system, Nintendo is quietly trying to ditch their stock of old Wii U consoles. Today at 10AM Pacific they began selling refurbished Wii U 32GB consoles on their eBay page with a $75 discount and a bonus $25 eBay Gift Card.

The discount to $225 on the Wii U via Nintendo’s eBay page ties the cheapest they were offering earlier this year for refurbished consoles. Now with them tacking on a bonus $25 eBay gift card and we know Nintendo is serious about trying to clean out their warehouse.

Word from eBay is there are 500 units available at this price and with the bonus from Nintendo. In case you’re not up to speed on Wii U prices these days, the drop to $225 isn’t so much teh best part of the deal. You can find the Black 32GB refurbished console for $229.99 elsewhere online at GameStop, but this bundle gets you two games and a bonus $25 eBay Gift Card basically blowing that offer out of the water.

For those in the continental US standard shipping is free. The delivery time looks a bit off though with arrival estimated anywhere between 2 to 8 business days. You have the option to bump up to expedited shipping for $10 and get the console by Tuesday, September 6 or pay $16 for one day shipping and get it by Friday, September 2.