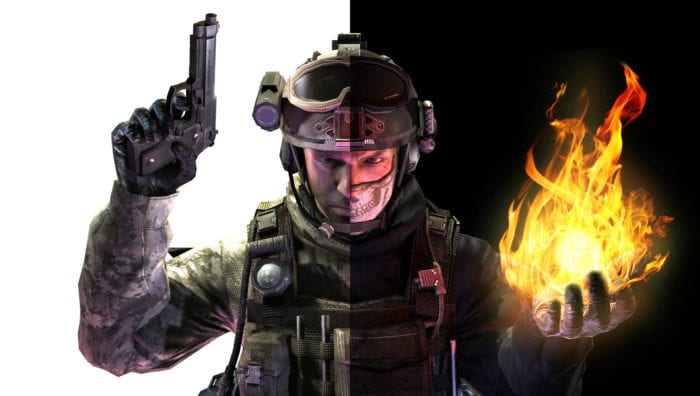 Line of Sight on PC

In a day and age where even the biggest and best shooter franchises are forced to either take a leap into the future or revisit the past in order to remain fresh, it’s hard to create a new and unique first-person shooter that doesn’t have you wearing an exo-suit or firing a Springfield bolt-action rifle without it feeling overly familiar. One could even argue the age of modern-day shooters has overstayed its welcome unless games begin to implement some sort of alternate timeline or, at the very least, a new and intriguing mechanic. I truly wish I could applaud Line of Sight for attempting to bring back that traditional, on-the-ground Call of Duty: Modern Warfare feeling, trading in innovation for sheer nostalgia, but it feels like a parody that takes itself way too seriously rather than being a well-functioning and enjoyable online shooter.

When you first launch your online career, a simple tutorial familiarizes you with the game’s standard controls. If you’ve ever played a first-person shooter, there won’t be anything unexpected sneaking up on you here like complex wall running or rocket jumping, and that’s totally okay. The gameplay is solid enough, although it can feel as if you’re controlling a floating camera with a gun in front of it rather than controlling an actual person, with there being little to no weight to the characters. The controls aren’t particularly bad, despite feeling a bit stiff, mind you, but they’re nothing you’ve never seen before and require little to no extra thought. This can be said about most of the game, as well.

Line of Sight promotes itself as a next-gen online FPS with unique and innovative systems, promising you will have a blast with this visual treat whether you’re a casual gamer or a die-hard fanatic. None of that is sadly true, since this game feels generic in every sense of the word. Take its visuals, for example; they aren’t exactly stunning, yet as with most things Line of Sight presents, it simply comes across like a five-year-old game. It doesn’t attempt to bridge the gap between a casual shooter experience and Esports level mastery or break the mold, but it throws a bunch of familiar and outdated elements together, utilizing aged and uninteresting gameplay elements as well as forgettable abilities.

As mentioned before, Line of Sight feels very much like a poorly made parody when seen in motion, which could be a direct result of the developers trying a bit too hard to bring traditional shooters back.Its character models and general textures look bland, the weapons sound sub-par, and the maps are designed in a monotonous manner, with laughably bad voice-overs and hovering text smudging the screen. Its blood splattered text bubbles reward you for headshots and double kills among a variety of other in-match achievements, yet these feel like punishments rather than rewards. Every time I scored a double kill, I was reminded of those traditionally cheesy video game spoofs you see in movies.

Most of the matches you’ll play will be against a team of snipers, since the crosshairs in the game (and thus the sniper’s zoomed scope) rarely move or sway. Quickscoping will, ninety percent of the time, guarantee you a hit because of that, making all of its matches feel like exactly the same sniper grindfest. You can start out with an assault and convince yourself you’ll do exceedingly well, but why would you struggle over medium to long ranges attempting to hit another player a few times while one direct hit from a sniper rifle kills the opposition without any real effort? Most players I came across are in that mindset, locking their location on the map and putting down enemies as if they’re playing a mere arcade game.

While there isn’t a whole lot to love, some of the more traditional mechanics Line of Sight tackles surprisingly well are its customization and detailed player stats. There’s a nice variety of weapons here despite sniper rifles being every player’s go-to, and they can be highly customized to give them a more personal feeling. Somehow its weapon customization reminded me of Brink, with a bunch of attachments and paint jobs to smack on each gun. The player can dissect weapons, thus allowing you to customize or replace components. Going all Frankenstein on a machine gun can turn it into something that looks vastly different from the standard model, which is a pretty neat addition overall.

Its player stats give you a nicely detailed overlook regarding your playtime, how many enemies you’ve killed, where you’ve hit them the most and so on. Some may truly appreciate a feature like this, allowing you to either improve upon aspects you unknowingly exceed in or otherwise attempt a different playstyle to boost a certain statistic. While this mostly gives you a solid overview, its messy menus make navigation an absolute chore.

Icons and shortcuts are spread thick across both the top and the bottom of the screen, which would in theory allow the player to easily and effortlessly navigate throughout its menus. Submenus plague the screen as you’re feverishly trying to find the one option or statistic you’re truly interested in, and when you have such deep customization and player stats, having to go through a handful of menus just to get to where you want to be is downright infuriating. It’s not fast and snappy like it should and could have been, and I would even go as far as to say some of its well-executed ideas suffer from chaotic menus.

So, are there any real reasons to play Line of Sight? Well, to put it bluntly, there are a variety of other games out there that do what this one does, only better. If you crave a game with high customization and deep statistics, this one might be worth a shot, even though the messy menu navigation may leave you frustrated. Sadly, everything else about Line of Sight, from its boring visuals to its downright laughable voice-overs makes it feel generic. Its weapons currently feel unbalanced with snipers being the only ones of any significance, and when a game promises to be a true next-gen online shooter, making it a sloppy sniper arcade game adds insult to injury.