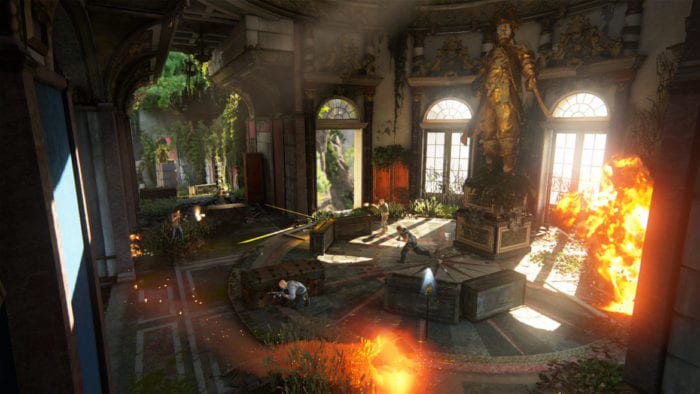 Answering the call of fans clamoring for more maps, Naughty Dog has revealed, and released, a new map for Uncharted 4 multiplayer. And best of all, like all of Uncharted 4’s multiplayer DLC, the map is free.

Called New Devon, the map is inspired by the ruined pirate settlement found in the game’s campaign. “It’s one of our largest maps to-date and features wide open exteriors with elevated vantages for those who prefer long-range engagements,” communications manager Scott Lowe writes in a post on the developer’s website. “If you’re more of a run-and-gun player, don’t worry—there’s no shortage of tight corridors for close-quarters combat.”

The trailer even gives a quick tease of the new Bounty Hunters DLC headed to the game in September. Long-time series fans will recognize the flashes as the beloved map, The Village, from Uncharted 2.

Releasing in Patch 1.12 alongside New Devon, Naughty Dog has also brought a host of other changes to the game. Players can now receive relics, used to unlock multiplayer items, from winning matches as well as completing challenges. Premium DLC skins and Pre-Set outfits have also been added to the DLC Vanity Chests, meaning they are now easier for players to unlock.

The patch even adds a new set of rewards for Season 2 of the game’s Ranked Team Deathmatch mode. “We’ve taken the community’s feedback to heart and with these changes, we’re aiming to make the competitive experience more rewarding for solo players,” Lowe explains.

For more on Uncharted 4, including the Bounty Hunters DLC next month, keep checking back right here on Twinfinite.