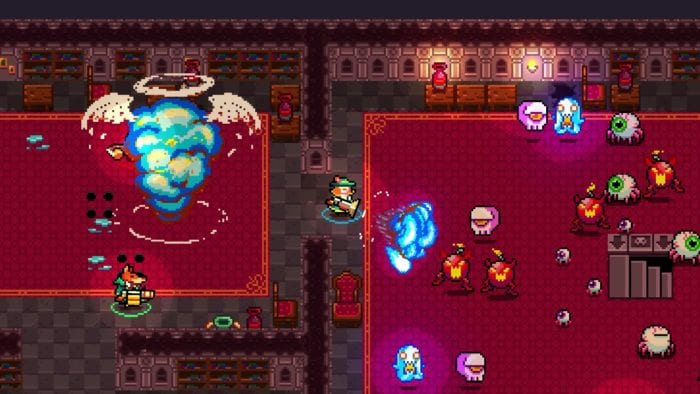 Monsters & Monoclesis a colorfully pixelated twin-stick shooter that would make any steampunk enthusiast proud. While it doesn’t spin the genre in any new direction, developer Retro Dreamer has added enough polish to an old formula that it’s barely noticeable. That doesn’t mean that there aren’t come cracks in the monocle, but overall the experience was quite enjoyable.

Set in a steampunk universe, you play one of four distinguished characters tasked with exterminating a variety of monsters that have run amok. This is the extent of the story, as it gives the characters an excuse to globe trot to various exotic locales, slaying every beast that dares to cross their path. Normally the limited narrative would be an issue, but thanks to the sheer personality and design of the various characters each level feels incredibly fresh. One world has you hunting down a pharaoh in an archaeological dig, while another has you fighting your way down into the basement of an occultist’s mansion.

The pixelated design lies at the heart of what makes Monsters & Monocles such an interesting game to play, as every creature is a new experience. Your next encounter could be spider-eyed monsters that shoot webbing, mechanized monstrosities, or a giant floating skull with a top hat that shoots laser beams. Even the four playable characters have their own instantly distinguishable appearances, such as a robot brandishing a top hat, an eloquently dressed madam, and a mustachioed gentleman.

Each level is made up of a series of floors that give you a randomized task to complete before you can move to the next section. These quests can be anything from finding a certain gun that’s able to blow open a locked door, to hunting zombie dogs, to destroying giant slime monsters that are roaming the landscape.Each world culminates in a final boss that will push your limits if your hunter isn’t properly outfitted, which can be a serious problem since Monsters & Monocles’s in-game items are all randomly generated.

Each character can hold up to two weapons, both of which can be upgraded with various in-game powerups you stumble across. Most major upgrades to weapons have to be purchased at a store found within the level, but the actual power-ups found here are randomized each time. There’s normally only two to three upgrades available at each store, so it’s fully possible to show up carrying two guns that can’t benefit from anything that the store offers. This ruins the pace of the game and forces players to backtrack to previous sections of the level, looking for those specific weapons to upgrade so they can have a chance at defeating the boss later down the line.

Now you can, however, buy more powerful weapons at the store, but this will depend on how many coins you were able to earn up until your arrival. Coins reset if you fail a level, which forces you to clear out every monster on every floor if you want a shot at getting the best gear to fight the boss. The trouble with coin collection compounds when you take into consideration the great variety of unique weapons in Monsters & Monocles. You have your standard weapons such as revolvers, shotguns, and burst fire rifles, but others such as a slime firing shotgun and a cannon that hurls crumpets are too entertaining to pass up.

Sadly the four characters you can choose from don’t nearly have as much variety to them. Sure, they all have different aesthetic designs, but there’s really no benefit to picking one or the other. This is a shame since the steampunk world leaves a lot of room for crazy abilities that could have added more depth to the combat. Given you need as many advantages as you can acquire when fighting your way through hordes of monsters, including something beyond just pointing and shooting would have made certain sections far less punishing.

Monsters & Monocles is a challenging game, and with no difficulty setting you will be forced to either learn each monster’s attack patterns or end up a red stain across the floor. However, if you are having trouble playing, the four player co-op mode can certainly ease the burden, and it creates some of the most chaotic moments Monsters & Monocles has to offer. This can cut down on the length dramatically, though, as you can clear through levels at a brisk pace depending on your skill level. Thankfully, Monsters & Monocles encourages players to go through the worlds again in order to obtain better and powerful runes and upgrades.

Overall, Monsters & Monocles is a game with real personality that instantly won me over with its steampunk charm. With solid gameplay, fun level designs, and unique weapons, this was a monster hunting trip well worth taking. Sadly, the lack of variety between characters and poorly designed weapon upgrading system sucks some of the fun away. Yet, the idea of firing weaponized pastries at giant monsters while sporting a top hat and handlebar mustache is too entertaining to ignore. Monsters & Monocles is not a perfect game, but it’s a great return to form for the twin-stick shooter genre.