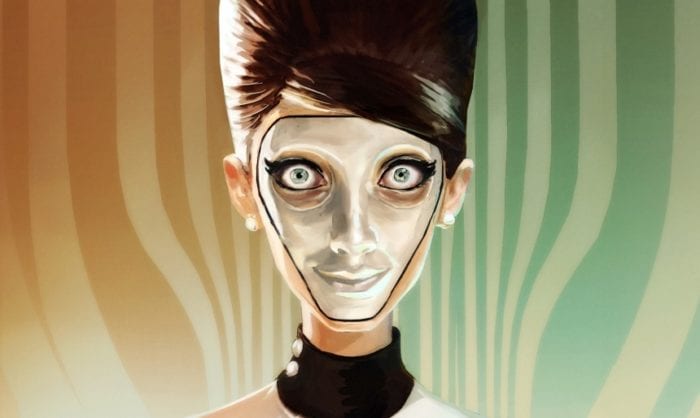 In We Happy Few’s “utopia” set somewhere in some European countryside, Joy reigns supreme. There isn’t an unhappy lot in the nation as everyone moves through each and every single day without a care in the world. At least that’s what the government would like for you to believe.

Those plentiful smiles that plaster the billboards of a war-torn country hide something dark underneath. Scientifically induced happiness is distributed to the masses in the form of Joy, a pill that can cover up all of your worries. It is a controlled sense of fulfillment, one that never comes close to being real as it twists the faces of civilians into nightmares grins. Yet, Compulsion Games’ We Happy Few is about those who don’t smile. Most choose to run from the truth, while you opt to entrench yourself in its cold but fulfilling embrace. That embrace, mind you, pulls you in quickly as We Happy Few’s prologue comes to an end before you’re finally set loose in the cruel open world.

I will admit, experiencing a release from Joy was a heavy experience. There I was, working in a news redaction facility, when suddenly a rush of forcefully forgotten memories came rushing in. I could hear the screams of a time long forgotten, memories of my brother, whose status is currently unknown, brought Arthur (the playable character) to tears. A choice was to be made. I could either take Joy, the lovely pink capsule that would rid me of my suffering and show the brighter side of the world, or I could toss it to the side and see what life truly was for the first time in what seemed like years.

Choosing the latter opened doors that wouldn’t dare be closed again. I could see the darkness seeping through each cracked smile, filling the air from behind closed shades where arguing could be heard before being abruptly silenced. What once seemed like a jovial workplace dedicated to keeping the news clear of sadness showed itself to be a crumbling establishment. My neighbor was missing but nobody seemed to care, and everyone cared more about whether or not I was willing to party rather than if I, their “friend,” was okay. The Piñata at the party I’d been forced to go to brought everything to a head. As I stood there, drenched in the blood of some poor creature, Arthur had finally checked out of this sick game that society was playing. It wasn’t long before those around me realized that I was no longer full of the Joy that many had now come to worship. Walking among them was a Downer, a direct threat to the world they’d worked so hard to build. I had to be put down.

After the brief prologue, We Happy Few begins proper. I awoke in a bunker of sorts, surrounded by pipes and lockers. New meters appeared at the top of the screen representing health, hunger, fatigue, and thirst. Without any further instruction I was given but one goal, escape.

The world of We Happy Few is an odd one. It’s beautiful in a rundown, war-torn kind of way. Since the game is set in an alternate 1960’s, there’s classic architecture lining the cobblestone streets. The fashion is clean, consisting of pretty dresses and dapper suits as citizens roam about in their Sunday best. While the sun is up, it’s difficult not to forget that you’re in some type of twisted dystopia. Butterflies flutter about, everyone has a smile on their face, and you can hear music blaring from some homes.

That changes when you roam too far from civilized society or stay out much too late. The rundown outskirts of town are full of rubble and debris from battles nobody seems to rightly remember. The individuals that live here are soiled, their clothes in tatters, and their spirits dashed against the very stones they tread upon. When night falls, the government pumps noxious gasses into the air, presumably to keep everyone at home and in line. It makes clear how the government feels about those who choose not to give into the pleasures of Joy and it creates a depressing and desperate world for players to explore.

Where the crack in We Happy Few’s particular brand of Joy begins to show, however, is when you get to play in that world. I must be clear and say this game is in Early Access on Steam and part of the Xbox One’s Preview program. It’s within reason to expect some glaring issues such as glitches, menus not working quite so well, or even quests not working the way they should.

For the most part, even with problems (the most glaring of which being with quests and the UI) We Happy Few runs well. The game’s quests have a habit of not syncing properly. Sometimes this can be fixed by walking away from the objective and walking back (the screen will stutter and everything will begin working normally), and others you’ll just simply lose out on your rewards no matter what you do. It’s unfortunate, and hopefully something that will be fixed. The UI has a weird habit of not showing you what you need to see at times. It can be annoying, but nothing too crazy. Still, it’s clear to see what the developers are going for in terms of gameplay. The open world is rife with opportunities to scavenge and steal, crafting takes center stage at being the chief mechanic, and combat is clunky, yet serviceable (more of a reason to take the stealth approach). There is still room for polish but it’s clear that things are moving in the right direction. However, without the story, the game falls into an all too familiar lull.

Don’t get me wrong, the survival aspect is coming along nicely, but it isn’t very different from any other survival game out there. Combat favors the world so your best bet is to avoid it, hunger and thirst will become your mortal enemies, and nothing heals you better than a good night’s sleep. What made the commonly used survival gameplay special, was the demented nature of We Happy Few’s narrative backdrop. That backdrop, which we’re only treated to a short segment of as the prologue, is absent from this early build, and its omission weighs heavily on the experience.

As I walked through the world, I couldn’t help but want more lore, more insight into why this was happening and how I fit into it all. Sure, there are some sidequests to slightly scratch that looming itch, but they offer small tastes of the potentially enormous pie. There are glimpses of the creepiness, the darkness beneath each medically forced smile. But glimpses aren’t enough to carry the potential depth of the situation.

It’s great to see that gameplay is shaping up to be challenging and engaging. Figuring out how to move through this unnerving world left me intrigued to see what else Compulsion Games would throw at players. Yet, it’s telling that the studio has sparked something with its story and world, so much so that it leaves everything else wanting.

Time will tell how We Happy Few shapes up as the Early Access period moves towards a full release. The developers have lined up some well implemented pieces, but it will be the story that ultimately links them together for one truly memorable experience or topples them over as just another survival game. Based on my time with the game, it’s safe to say that it’s definitely leading towards the former. It will be interesting to see how Joy shapes the future of this deadly society.

Modder Adds Mario Kart Track to Zelda: Breath of the Wild
To Top