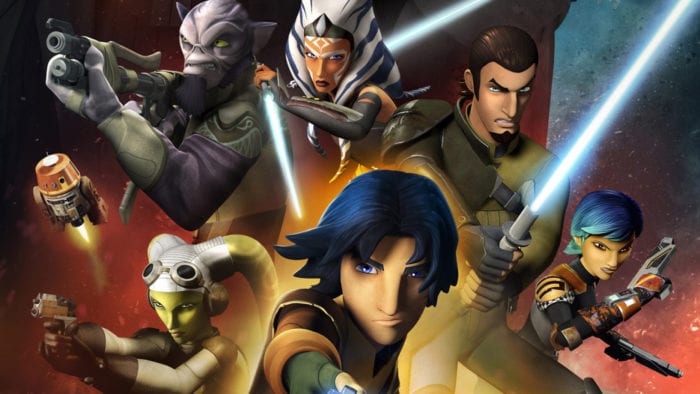 The third season of Star Wars Rebels got a kickass trailer earlier today, and along with showing off two episodes of the upcoming season, a poster was also unveiled. Unlike the poster for last year, which showed all six members of the Ghost crew–Jedis Ezra Bridger and Kanan Jarrus, Sabine Wren, Zeb Orrelios, Hera Syndulla, and their droid Chopper–this poster just shows Ezra and Sabine sporting their new looks. The Jedi Padawan has cut his hair and is rocking a green lightsaber, while Sabine now has purple-white hair and a jetpack. Oh, and there’s still Chopper, I guess.

On the villains side, we’ve got the season’s big bad, Admiral Thrawn (voiced by Lars Mikkelsen) and Darth Maul, the villain from Episode I. Maul, who ended up cut in half in that film, got brought back to the series thanks to the Clone Wars cartoon, where he was given robot legs. Rebels brought him back, where he duped Ezra into unlocking a Sith Holocron, and while he did blind Kanan, he’s still out there. Which can’t be good for either of them.

Star Wars Rebels returns to Disney XD in the fall.