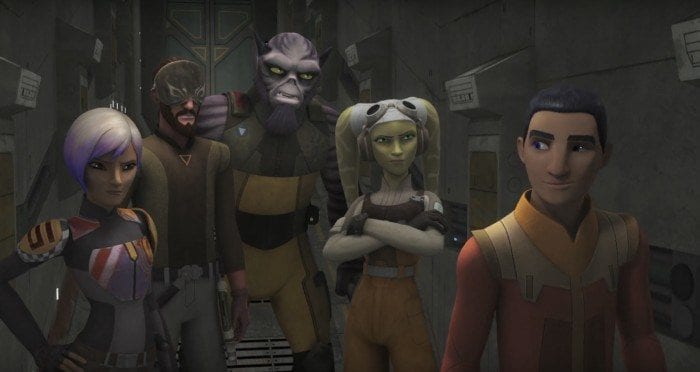 During the Star Wars Celebration event in London this weekend, a trailer for the third season of Star Wars Rebels was unveiled, and if you thought last season was a doozy, this one isn’t taking any breaks.

The third season jumps ahead months after the end of season two. Jedi Padawan Ezra Bridger has cut his hair and gained a new lightsaber to replace the one destroyed by Darth Vader, while his master Kanan Jarrus is still blind (and rocking a sweet beard) after facing off against Darth Maul. New hair aside (Sabine’s purple now!), the big villain this time around is one Admiral Thrawn, who diehard fans will remember from the Expanded Universe. He’s known for being cold and calculating, which definitely can’t be good for the Rebels. Thrawn will be voiced by Lars Mikkelsen, the brother of Mads, the latter of whom will be in the upcoming film Rogue One as the father of protagonist Jyn Erso. Also joining the cast of characters will be the young version of Wedge Antiles, who most may remember as the Hero of Endor.

Star Wars Rebels doesn’t premiere until later this year, and going off everything in the trailer, Ezra and friends still have some rough times ahead of them.