At some point it has to come to an end right? Nothing lasts forever. *cue sappy music* Still though, it doesn’t make the sting for 360 and PS3 Destiny players any easier.

In their most recent blog post, Bungie further detailed how its all going to go down for 360 and PS3 fans in the coming months, and it isn’t pretty. Essentially, legacy Destiny players will be living in their own, lonely, parallel universe. Take it away Bungie:

“Starting August 16th, 2016, Legacy Consoles will no longer receive major Destiny updates or content releases. On this date, the Account Import process will become available on PlayStation 4 and Xbox One Consoles. From this date forward, progression will no longer be shared between console generations within the same console family.” 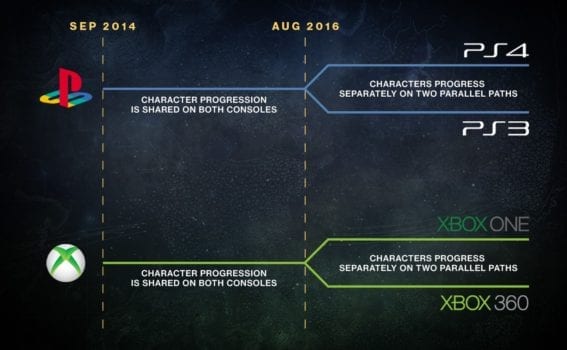 Other notable signs of the Destiny-apocalypse for PS3 and 360 players include:

If any of this concerns or applies to you, you should definitely go check out the full breakdown on the Bungie blog.

While some of that has been partially known, this time we have a hard confirmation on a lot of things such as the soon to be permanent lack of major update support (read: stuff like April Update) and the shortened time limit to get the Year Two Moments of Triumph shirt and such.

It seems like August really is it for legacy Destiny players? Saddened by the news are you planning on upgrading to a current generation console anyway? Let us know in the comments.