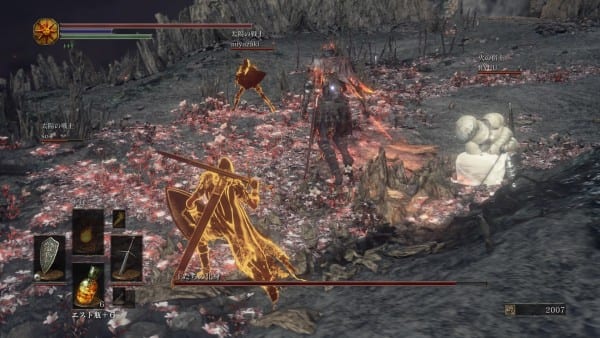 Here he is: the final boss of Dark Souls III. Be prepared for a long fight. The Soul of Cinder has two health bars, and he changes his attack patterns very frequently in the first phase, so this fight may take a bit of practice before you get comfortable and familiar with his patterns. Most of his attacks are fire-based, so equipping fire-resistant armor and equipment will help you out a bit in this fight.

At the start of the first phase, the Soul of Cinder will attack you with a fire longsword. His attacks are very swift, and his patterns consist of mostly regular slashes and thrusts. You can block them with your shield, or roll out of the way. After depleting his health a little, he’ll switch to using a staff where he uses spells like Crystal Soulmass, Crystal Soulspear, and Crystal Greatsword. His staff phase is the best time for you to stick close to him and start dealing damage, since most of these attacks are long range. When you see him charge up the Crystal Greatsword, roll out of the way to avoid damage, and then continue the assault.

The Soul of Cinder also has a lance phase where he will charge at you with a thrust, or perform an overhead swing. These attacks are fairly easy to read, though they can deal quite a bit of damage, especially if you get caught in a thrust. He’ll also switch to pyromancy attacks, where he’ll use Power Within, Great Fireball, and attack you with a scimitar-like weapon. Be careful when you see him charge up the Great Fireball; even if you’re behind him, he’ll turn around very quickly to throw the Fireball at you, so you’ll definitely want to start rolling once you see that Fireball getting prepped.

His final move set consists of miracles like Heal and Wrath of the Gods. This is another great opportunity for you to start dealing more damage as he’s rather passive during this phase. Just be sure to roll away when you see the Soul of Cinder curl in and getting ready to cast Wrath of the Gods. In between each move set, the Soul of Cinder will get onto his knees; when he does this, go in and get as many hits as you can, but make sure you have enough stamina to roll away.

Once the first health bar has been depleted, the bar itself recharges and you’ll enter the second phase. Make sure to stay far away from him as he’ll start off with an AoE attack. Here, the music changes to an epic rendition of Gwyn’s theme from the first game, and the boss himself starts using Gwyn’s attacks to fight you. His attacks consist of five-hit combos that can juggle you if you get caught in a single hit. He will then finish the combo by thrusting his greatsword into the ground, executing a devastating fire AoE attack that will almost certainly kill you if you were already caught in the combo. Thankfully, the windup to this combo is very slow, so be sure to back away once you see him raise his sword slower than usual.

He’ll also throw Sunlight Spears at you. Occasionally, he’ll throw the Spears up in the air to create an AoE effect, but this can be avoided by rolling away. Lastly, he also has a grab attack similar to Gwyn’s. You can tell when the attack’s coming by studying the movement of his off-hand. When he draws his hand back slowly, don’t try to block it – just roll away.

If you’re good at parrying attacks, the second phase of this fight should be a breeze, apart from the grab and the Sunlight Spears. If not, make sure to stay out of his combos and stab him in the back when it’s safe. Remember not to get greedy during this final phase, even if the Soul of Cinder seems much slower than he was in the first phase.