Finally, you’ll get to face the final Lord of Cinder after a long journey in Dark Souls III. However, before you get to fight Lothric himself, you’ll have to face his older brother, Lorian. Don’t be fooled; Lorian might seem like a pushover at first, but the real fight only begins once you’ve depleted his health bar. But first things first, this is another fight where you’ll want to ditch your shield and two-hand your weapon. Another tip to keep in mind is that you should always have your target lock on at all times.

When the fight begins, Lorian will swing at you with his flaming sword. The slashing arcs are easy to roll through, and if you stay close to his body, he has a tendency to overreach and miss you with his swipes. You’ll want to stay close to him throughout this fight. When he’s done with his attack string, Lorian will teleport to another location in the room. He’ll usually teleport behind you, so get ready to roll. He’ll appear with a thrusting attack the second he comes back into the fight, and this can deal quite a bit of damage, so make sure to roll out of the way and lock on to him again.

Occasionally, he’ll get on his feet for bit and perform an overhead swing. This attack is slow, and will allow you to get behind him for some free hits. He also has an upper slash, but again, this can be avoided by rolling to the side. These two attacks will deal the most damage to you, but the windups for both are relatively slow, so it won’t take long for you to learn the tells. 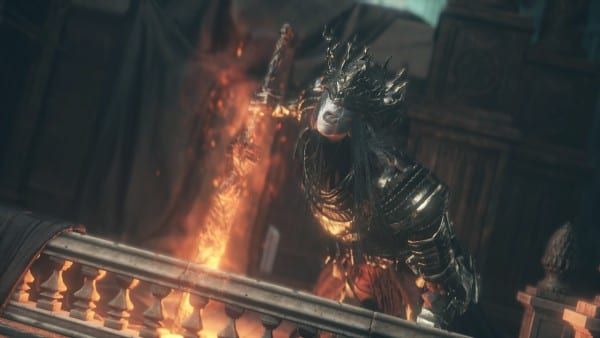 Once you deplete half his health bar, Lorian starts to get a bit more aggressive. He’ll imbue his sword with magic, and start teleporting far away from you. When he reappears, he’ll occasionally swing the white magic sword downwards, sending a shockwave across the room. You’ll want to rotate the camera to look out for him, and roll to the side right before he slams the sword down.

When you’ve depleted his entire health bar, Lothric himself will enter the fight and revive Lorian. Now, Lothric will be on Lorian’s back as he casts magic spells at you. Lorian’s move set will remain the same, but you’ll have to start watching out for Lothric’s homing magic projectiles. Just like the fight with Aldrich, the smaller projectiles can be avoided by sprinting or rolling away. He also has an attack where he launches a large magic spear at you. This attack will not home in on your position, but it deals a significant amount of damage.

Your goal in this phase is to attack Lothric. Aim for Lorian’s back and you should be able to damage both of them. Lorian will have significantly lesser health here, so if you can deplete his health bar, Lothric will take time to revive him, leaving him open to attacks. Once you’ve defeated Lothric, take out Lorian if he’s still alive, and the fight is yours.