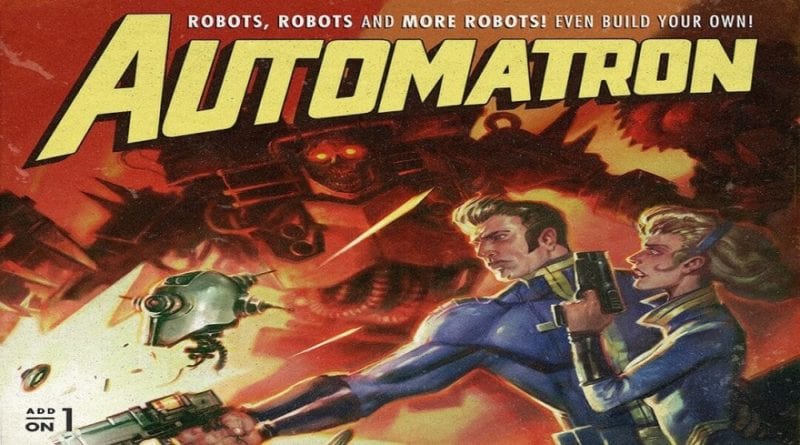 Fallout 4 wowed players upon its release back in November of last year. After an official reveal at E3 2015, the hotly anticipated game was quickly released only a few months later. The new Boston setting lent itself quite well to the turmoil brewing between humanity and its stark situation. Not to mention, there was a veritable ton of content that allowed the game to sink its hooks into anyone who entered its world.

Yet, even the biggest games need a shot of life every once in a while. After five months of entering decrepit vaults, visiting landmarks, and killing all sorts vile beings, the folks at Bethesda decided it was finally time for more robots (because you can never have too many of those).

At first it seemed as if Bethesda was taking the easy way out. On the surface, Automatron is nothing more than hundreds of robots being thrown into Fallout 4 for you to fight and salvage. It adds in a new companion, ADA, whom you can customize to your heart’s content, building the greatest mechanical buddy you possibly can. There are even new weapons to make your day to day raider/mutant/beast/robot slaying a bit more enjoyable.

As a “content pack” Automatron does very well in injecting some intriguing elements into the game. The additions, even in a world many players have poured hundreds of hours into, are honestly worth the price tag on their own. Running through old areas with a murderous Automatron in tow transforms encounters, and it makes scavenging a whole lot easier since they can carry so much. Being able to build these same robots however you see fit is a game itself. Mixing and matching components, looking for the best weapons, and just seeing how crazy you can get with your creations can suck hours out of your day.

But, as with everything Bethesda seems to touch, being just “worth it” didn’t seem to be enough. There exists even more under all of the metal and wiring.

Much like the main entry, there is a constant sense of underlying humanity that permeates every aspect of Automatron. Listening to the Holotapes throughout the story, you come to know the normal lives survivors tried to lead amidst the radiation and sudden robot invasion. Your guiding antagonist this time around is The Mechanist, an unknown being casting a shadow over the Commonwealth and who enjoys constantly harassing you through speakers and robots.

The AIs you’ll meet and the enemies you’ll fight are all well thought out and delivered, as is a narrative that kept me guessing for the entire ride. The story throws healthy little loops into play every time you think you’re catching up, and when a clarifying conclusion did come, I couldn’t help but smile at how well it all played out.

Combat has received its own attention in this expansion. Yes, there are some new weapons and armor for players to get their hands on, including a Tesla Rifle that is just as exciting as it sounds, or the actual head of an Assaultron, which is just as creepy as it sounds, but fights are more engaging as well.

The Mechanist’s army of Frankenstein-esque robots force players to rethink how they handle mechanical enemies. Since most of the robot horde’s members are made up of mixtures of the highly deadly parts, simply taking out a leg or focusing on one area won’t always cut it. You’ll need to find cover, switch weapons, and distract if you want to make it out alive (because unscathed is almost never an option). As with the human enemies in the base game, hordes of robots will present tons of variety, so you’ll never be able to just hang back. The fact that you’re kept on your toes in nearly every encounter helps to remind you that you are but a mere human facing off against steel gods, which makes bringing them down all the more satisfying.

There’s a new human faction – The Rust Devils – although you can’t join them. Pretty much Raiders on steroids, they’re intelligent, utilize robots to do their bidding, and turn robot scraps into durable armor that looks like it was ripped right out of Mad Max. In a way, they’re a lot more like you than other enemies you’ve faced, so it makes for interesting encounters . The Rust Devils utilize robot companions that they themselves built, as well as custom armor and weapons. The heavy onslaught of the robot/human teamwork, as well as their sheer power, is unlike anything else seen in Fallout 4.

The true star of it all, though, has to be ADA. Your new companion who also happens to be an AI is both hilarious and thought provoking. At times, hearing her try to rationalize human emotion will make you chuckle. Other times, when you see that she is truly trying to be something more, you can’t help but feel for her and her plight.

Automatron manages to take everything that made Fallout 4 great and magnify it. The customization afforded by the robot building, the interesting new weapons, the mysterious adversary, and the hordes of mechanical enemies make for an enjoyable experience throughout that will last well beyond the final quest. It captivates the best of science-fiction while never deserting the core of the franchise that fans love. It is a true expansion in every sense of the word, and if you have any interest in Fallout, you should definitely give it a try.