Pontiff Sulyvahn is probably the first boss in Dark Souls III to really give players a serious challenge, especially if you’ve been playing these games since the series first started. Just like the Fume Knight from Dark Souls II, Pontiff Sulyvahn wields two swords – one magic and one fire – and he is absolutely relentless with his combos and attack strings.

If you have a shield, I highly recommend getting one with decent stability. A shield with at least 50 stability should be good enough for this fight. Because Sulyvahn’s attacks are so quick and dangerous, you really need to be on point with your roll timings if you’re planning to roll through his moves. With a shield, you’ll be much less likely to be punished, though you’ll have to pay closer attention to your stamina bar and know when to drop the shield and when to hold it up. Of course, if you have a shield with high magic and fire defense, that will be an added bonus, but you should get by with just a 100% physical-resist shield.

During the first phase of the fight, Pontiff Sulyvahn will simply attack you with his two swords. Most of his attack strings consist of five consecutive hits, so be sure to block them when he’s near you. His last attack is usually a slower sword thrust, and you’ll likely be able to dodge this last stab if you continuously circle strafe around him during his attack string. If the thrust misses you, quickly drop your shield to regain some stamina and go in for one quick attack before rolling away. I’ve found that this is the safest way (though you’ll still take a small bit of damage if you don’t have 100% magic or fire resist on your shield) to mitigate his attacks and get some hits in, though it is a bit on the slow side. 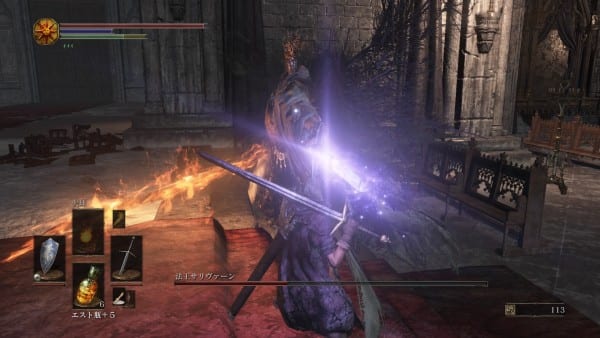 Pontiff Sulyvahn will occasionally leap up towards you and smash his swords into the ground. When he does this, you’ll lose your target lock, so be ready to roll in his direction to dodge the attack. If you’re quick enough, you can get in a cheap hit on him when he lands.

Once his health is down to 50%, the next phase of the fight begins. At the start of the second phase, he’ll thrust his swords into the ground. Be sure to stay away from him, as he’ll soon execute an AoE attack. When you see him standing in place, summoning a dark cloud behind him, this is a sign that he’s summoning a clone to join the fight. This is your best chance to attack him. Once you see him start the summon, quickly lock on to the clone and go in and wail on him. Sulyvahn is completely vulnerable during this process, so try to angle your attacks to hit both the clone and Sulyvahn himself. Your first priority should be taking out the clone, though, as he can deal a lot of extra damage.

Both Sulyvahn and the clone can also shoot magic projectiles at you, and these will hit very hard even with a shield. Thankfully, the projectiles are pretty slow, and you can dodge these fairly easily. Once you take out the clone, continue to circle strafe Sulyvahn as you’ve been doing in the first phase, and only hit him at the end of an attack string, and when he’s summoning a clone. As long as you take out the clones quickly and avoid getting caught in any of Sulyvahn’s attack strings, this fight will be over in no time.