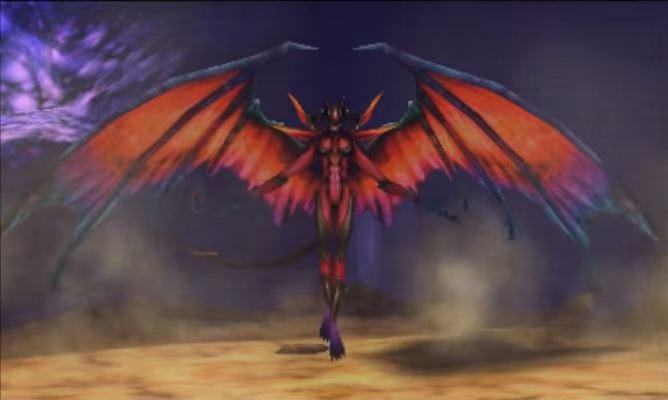 Diabolos is a right pain in the butt, but he’s not impossible to beat. His gravity attacks will never outright kill you since they only deal fractional damage, but they can bring you from full health to critical in a matter of seconds. A good defense will be the best offense in this fight, so come prepared with potions and patience.

If you can play co-op with friends, that should make the fight much easier as you can all spread out and attack from different angles without all being pulled into the gravity attacks. If that’s not an option for you, just make sure you’ve got a full party of monsters with you as per usual. At this point in the game your monsters should be at least level 15, but upwards of 20 will make things that much easier.

Now let’s talk about these gravity attacks. The weakest of them all is Gravira, and isn’t much of a threat at all. The gravitational pull is extremely week and can be avoided easily. If you find yourself hit by the blast anyway, it should only take a few hundred hit points from you. Nothing a quick cast of Cura can’t solve.

Black Hole takes things to the next level. Diabolos creates a large gravity bubble on the ground that will pull you in with a fair amount of force, so do your best to dash away from it. If you’re caught in the bubble your health can drop to less than half, and Diabolos often closes in on you to swipe with physical attacks to take you out. The attack is still avoidable, but can put quite the damper on your progress.

Dark Messenger is where things can get really frustrating. Diabolos creates a massive gravity ball around itself, with a stronger much stronger pull than either Gravira or Black Hole. This attack deals substantially more damage than either of them as well, and can almost immediately put you at just 1 HP. Since you’re pulled directly into Diabolos, it will attempt to use Rend (a simple, low-damage physical attack) to deplete the last of your health, but if you’re quick you can cast Cura or use a Hi-Potion to withstand the attack. As soon as you can run away to heal up properly, do so.

Another attack to avoid is Immobilize. Just like the name implies, you become afflicted with the immobilize status effect and cannot move temporarily. If Diabolos hits you with that and follows up with Dark Messenger, well let’s just say it’s best to dodge Immobilize if you’re able.

Blackout is the final annoyance up Diabolos’ sleeve, as it turns most of the arena pitch black. During a blackout you cannot lock on to and target, and even in the few bright areas you’ll only see a silhouette of your enemy. As I said before, the best offense is a good defense in this fight. Just keep running around and buffing yourself up until light returns to the stage (it should take between 30 seconds and a minute), then continue your attack.

Diabolos has a couple more low-level moves like Assault Twister and Shadowcast Wings, but they’re pretty easy to avoid and won’t hurt you too bad. Just dodge them and keep attacking where you can.

Since you’ll be doing a lot of dodging, take advantage of your attack windows by hitting fast and hard. If you’ve got any third-level magic spells (Firaga, Thundaga, etc.), bust them out. Whenever you get the chance to Trance and hit with a Crystal Surge, take it. Take particular note of 1,000-Needles and Critical Power Crystal Surges, as they will beef up your attacks in the best way possible for this fight.