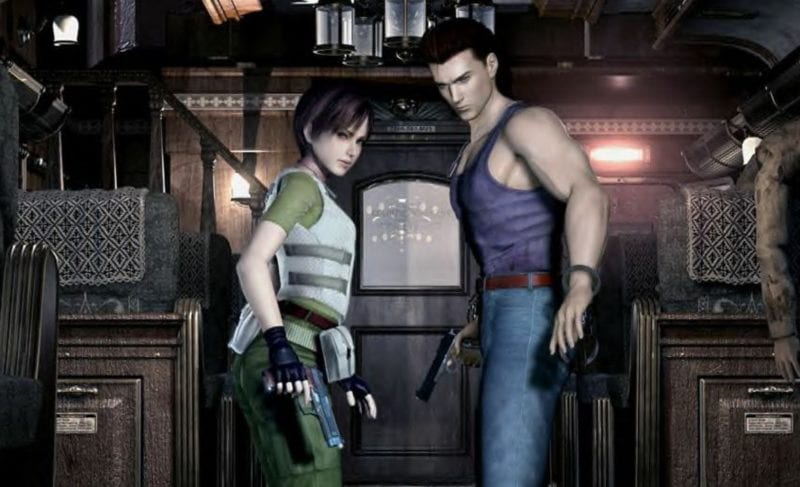 I’ll be blunt. Resident Evil 0 looks gorgeous on the current generation of consoles, and the game’s opening level has the meaning of ‘survival horror’ down to a T. But the second you step off the train, the game’s faults begin to show themselves, and you’ll find yourself much less enamored as the game goes on. The lack of inventory boxes, the shockingly boring bosses, and the exploration of a ‘training facility’ that’s basically a smaller version of the Spencer estate make Resident Evil 0 feel like an attempt to recreate the horror of the original with varying degrees of success.

It’s not all bad though. You would think that having two playable characters in a Resident Evil game would ruin the atmospheric tension of the classic games (see: RE5 and RE6), but it works surprisingly well with this entry. Rebecca can mix herbs, but Billy’s better at handling weapons. Rebecca can carry chemicals and use them in her mixing set, but Billy can move heavy objects. So despite some of its inherent issues, Resident Evil 0 does add a whole new layer of thought and complexity by forcing players to think about both characters’ strengths and weaknesses each time they enter a new area.

On one hand, it’s easier to clear out enemies in a room. You have two guns. Might as well trash the place with bullets, right? On the other hand, you have to constantly be on the lookout for your partner’s wellbeing. If you get separated and one person gets into trouble, you’d better help them quick or it’ll be game over for you. The game’s AI is surprisingly capable; your partner will fire their weapon conservatively, and you can rest assured that they won’t be blowing through your entire stock of herbs and first aid sprays in one go.

Billy’s first line in the game: “Been fantasizing about me?” Billy pls u__u

Resident Evil 0 is at its best when it gets you comfortable with the idea of having two characters at your disposal, working together to solve puzzles, and then suddenly wrenching a character away from you without a moment’s notice.

There was a certain point in the game where both Billy and Rebecca had their health in the red, and I was out of healing items. I came across a first aid spray – basically a godsend – and I had to decide which character to use it on. Naturally, I decided to use it on Billy. He’s the weapons expert, he’s tougher, he can take more hits than Rebecca. There was a new location coming up, and I could only send one character in to explore for the moment. I made my decision thinking I would have Billy explore the upcoming areas alone. It was all going rather swimmingly… until I realized I had to send Rebecca instead because I needed her chemical mixing ability in order to progress. Sad face.

It’s a cruel joke on the player, especially when you’ve loaded big, strong Billy with all your best weapons, and you’re suddenly forced to explore unknown territory with Rebecca, the rookie medic. Resident Evil 0 seems to encourage the idea that these two characters should always be joined at the hip, so they can watch each other’s backs when in danger. But the game also severely punishes the player when you become too reliant on one over the other. It’s a special kind of tension that the series hasn’t been able to replicate in a while now, with the exception of a few key moments in Resident Evil 4.

Resident Evil 0 introduces co-op and executes it well, so it’s really too bad that so many other things in this game feel lazy and uninspired. For instance, here are the first three mandatory bosses you’ll get to face over the course of the game: a giant scorpion, a giant centipede, and a giant bat. Sure, Resident Evil 1 had a giant snake and a giant shark, but at least those bosses didn’t feel entirely out of place in the Spencer estate. The first three bosses of Resident Evil 0 feel completely random and tacked on for the sake of shock value, and they mostly left me facepalming with the thought of how ridiculous it all was.

Don’t even get me started on the inventory system. Having two characters with six inventory slots each seems like it should make the game a little easier. In some ways, yes, but you will inevitably find yourself in situations where you’ll want to switch items between characters but both are full up. This means that you’ll have to put down certain items before you can start exchanging stuff. Guess what? The lack of inventory boxes means that you have to leave all your stuff on the ground. My question is: why take out inventory boxes when leaving your stuff on the floor serves the same exact purpose? The removal of the boxes only served to make things more disorganized and difficult to sift through, and it’s difficult to see the rationale behind this decision.

Not to mention, each room has an item limit so once you hit the limit for a room, you’ll have to store your items in a second room. This wouldn’t be so bad if I didn’t have to always make sure my character was standing in the exact right spot to pick up a certain item. Oh, and if you accidentally left an important item on the ground in a blind spot that you can’t see onscreen, well… good luck with that.

It’s also worth mentioning that if you’ve been playing the Resident Evil games for the story, you’re going to be pretty disappointed with the plot here. Both characters, Billy in particular, are never heard of again after the events of Resident Evil 0. Yes, Rebecca does show up in Resident Evil 1, but even she feels entirely unimportant in the plot of that game. The story of Dr. Marcus and his research is also almost completely ignored in the rest of the games, so I think it’s safe to say you’re not going to find any particularly valuable lore in this one.

Resident Evil 0 is frustrating because it took a big step forward by introducing two playable characters, but so many steps back when it comes to bosses, mechanics, and reskinned levels. However, beating the game does reward you with the highly silly, highly ridiculous, and highly overpowered Wesker Mode where you get to play as Wesker in place of Billy. This mode certainly retains the series’ lovely sense of humor by letting you do speed dashes and literally stare enemies to death.

If you’re hungry for more of that classic gameplay that involves backtracking, hunting down statues and keys to solve cryptic puzzles, and exploring enclosed spaces with fantastic horror movie camera angles, Resident Evil 0 will satisfy that hunger. It’s a wonderful Resident Evil game with a few drawbacks. But even though it has been remastered with so much love and care, it’ll still be that one game in the series that people eventually forget about.