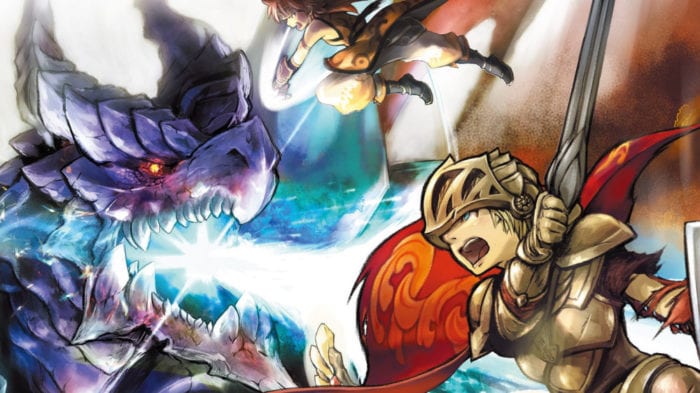 Final Fantasy Explorers is a handheld MMO-lite experience and will probably be a dream come true for fans of the numbered MMORPG Final Fantasy games. It’s a great fit for players of FFXI and FFXIV (or just MMORPG people in general) that want a casual detour of something familiar, or even single player fans intimidated by the monthly fees of those games, but have an itch for an online, multiplayer Final Fantasy experience. However, don’t come knocking on Final Fantasy Explorers door looking for something akin to Final Fantasy IX’s story or gameplay, otherwise you are are going to wind up being very disappointed.

Over the course of the game, you’ll unlock up to 21 unique jobs, and (ideally) team up with other online players to take down Eidolons (classic summons and monsters from past Final Fantasy games). The job system is very similar to something like what was in FFV, FFXI, or FF Tactics. Each job has its own unique skills, but can mix and match a bit from other jobs, as well. Also, each have certain roles, and parties are most efficient when you group up using a varied combination of the four different role types (tank, healer, damage and support). Again, though, this is an MMO-lite, and it’s hardly as punishing as true MMO games in terms of party make up. You can play whatever job you want and make it work for the most part.

In addition to its varied job system, Final Fantasy Explorer’s fast-paced combat is another big strength. Using abilities, maneuvering around in battle, and chaining attacks is all so fluid, and never felt clunky or slow. Some jobs have you stringing together abilities quickly and in an Eidolon’s face, such as the Monk, while other jobs, such as the Time Mage, usually hang back and look for ways to support the party from afar. If you’re not feeling a certain job, you can switch up your experience easily since changing your job is as simple as returning to town and picking a different one in the menu.

It’s important to find a job you’re comfortable using as you’ll need to utilize the different strengths and weaknesses of each class in Final Fantasy Explorers premier content, the aforementioned Eidolon battles. Quests that involve Eidolons can be tough, and require strategy and coordination. Boss fights don’t devolve into hacking and slash or button mashing attack. You’ll need to learn the mechanics of the fight to smoothly clear these battles. Shiva, for example, will freeze any party member that gets caught in her attacks, while Ramuh will use the power of crystals to teleport around the map and rain thunder on you.

What will give some Final Fantasy fans pause is the lack any kind of meaningful story. There’s a story, but you would be forgiven if you forgot it existed. It’s just there because it would be weird if a Final Fantasy game actually had zero story and was just a list of quests. So we’re left with a story that is something about explorers being in search of new lands to discover crystals. This is there pretty much just to keep up appearances. Final Fantasy Explorers is basically just a list of quests with areas to complete them in and you should keep your story expectations very, very low.

For single player diehards looking for a deep story, this could be a deal breaker. Especially because Final Fantasy Explorers is really meant to be played online and can get dull if you’re dead set on staying offline. You can sub in monsters that you can level up in lieu of online party members, but it just isn’t the same experience. The monster AI is hardly up to par with that of an actual human teammate, so sticking solo with monsters makes Eidolons and other tough quests much more difficult than they need to be. Because of this, it’s really worth breaking out of your single player shell if you’re committed to getting Final Fantasy Explorers. Jumping in and out of online lobbies/quests is very simple and other than the occasional slowdown, it plays very well online. Considering that ease, and how much better the experience is online, there’s really no good reason to avoid it.

What is disappointing regardless of your gaming background, are the game’s areas. Other than a few exceptions, there aren’t a lot of areas that are visually striking and stand out. Even after hours of play, I can only remember the names of a handful of zones. Also, there’s no 3D feature. While I doubt I would have used it full time, perhaps being able to just walk around and explore Final Fantasy Explorers’ areas in 3D would have made the vistas more memorable.

Still, none of that means that Final Fantasy Explorers is a shallow game. Quite the contrary, actually. The job system mentioned previously provides a ton of flexibility and customization options especially with its abilities. Through the use of Crystal Surges, which are temporary special abilities that can be used while participating in combat, your normal abilities can gain something called “mutations.”

Mutations give your abilities new traits that slightly alter what they do, such as adding fire damage, a paralysis effect, or draining health. These mutations can be made permanent and into their own ability (complete with a new name if you want), by purchasing them when you’re back in town. By taking advantage of this system, you can really fine tune your character’s build for a specific play style or an Eidolon that you’re on the hunt for.

There’s also a fairly deep crafting system as well. Most of the armor and weapons you wear (many of which are inspired by Final Fantasy heroes and villains), will be crafted yourself by collecting materials that are found in certain areas or from enemy drops. There’s a bit of grinding and re-running quests over and over involved if you want to make sure that your equipment is always as good as it can be. You can also use those materials to further raise the stats of your equipped armor, powering up stats such as attack, magic defense, and/or evasion.

Grinding can either be a drag or therapeutic depending on your preferences, so decide whether or not this is for you before diving headfirst into Final Fantasy Explorers. If you’re coming from an MMORPG background, the amount of grinding in Final Fantasy Explorers isn’t excessive, especially if you’re killing the time with friends, but if you’re flying solo, it could get real dull, real fast.

The key to enjoying your time with Final Fantasy Explorers is just understanding what it does well, and what it very obviously doesn’t. It just isn’t in the same genre as the classic single player titles and shouldn’t be compared to them in any way. Final Fantasy Explorers is an excellently done, fast-paced dungeon crawler that has the added bonus of being able to use classic jobs and monsters to help it be as accessible and familiar as possible. On the flip side, it doesn’t have a story and has to borrow some of the boring parts of MMORPGs (read: repetition and reliance on online play) to make it go.

Would a deeper story and some interesting characters put Final Fantasy Explorers over the top? Sure it would have. But considering how well it does just about everything else and just how much there is to do, those omissions are more than forgivable. Final Fantasy Explorers is a game that both newcomers and veterans to the online Action RPG genre should enjoy greatly.