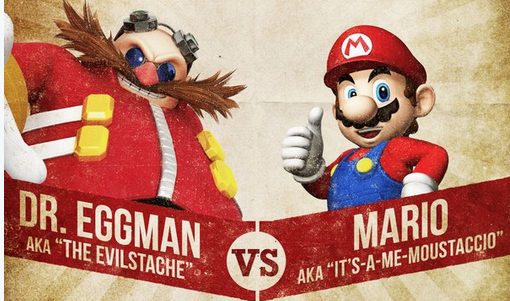 For those who don’t know, the month of November has an event called Movember. For 30 days men grow out their mustaches, in order to raise funds and awareness for men’s health. The Movember Foundation runs an official event every year, an official #Movember is on Twitter, and many people have come to celebrate the event. Although some call it other names like No-Shave November.

The official Twitter account of Sonic the Hedgehog decided it was going to get in on the festivities by pitting its infamous mustachioed villain Dr. Eggman against the original mustache wearing plumber himself Mario, and challenging Nintendo of America to a battle.

Never one to back down from a challenge, Nintendo of America’s Twitter decided to respond by calling out the shortcomings of Eggman’s stache.

Of course this caused Sonic to launch a quick rebuttal as to where Mario’s priorities lie.

Sonic surely started the debate to end all debates today, as even other prominent video game franchises tried to get in on the action, with their upstart new additions to the decades long mustache battle.

The Sonic the Hedgehog Twitter account has been known for some of its social media antics in the past, and it’s good to see other companies returning with some good natured fighting. Besides, it’s high time we answer the question of which video game character has the best mustache. Who do you think should be awarded the Stache title? Is it Dr. Eggman, or Mario? Or someone else entirely? What do you think about companies social media accounts having some fun like this? Let us know down in the comments.