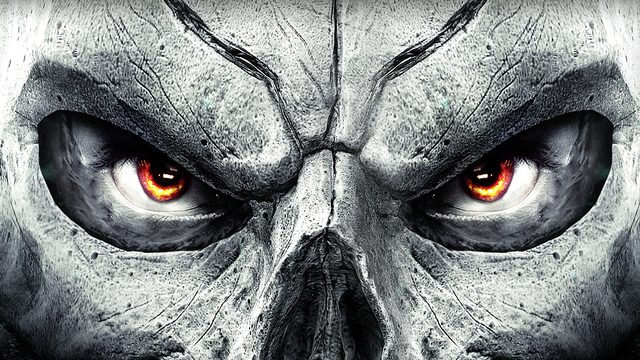 Remastered games were all the rage early on, but have slowly been going away thanks to backwards compatibility and services like PlayStation Now. But the folks at Nordic Games aren’t going to let that stop them re-releasing Vigil Games’ Darksiders 2 for the PS4 and Xbox One, under the stupidly clever subtitle ‘Deathinitive Edition’.

If you didn’t play the first game when it released back in 2010 here’s what you need to know: the Horseman War accidentally started the apocalypse earlier than planned and had to go on a quest to clear his name. After killing the power hungry angel responsible, War looked to the sky and saw three comets hurling toward earth, signaling the arrival of the other Horsemen.

Darksiders 2 doesn’t continue from that cliffhanger, but rather takes place during the 100-years that War was in prison. His brother Death goes on a quest to redeem his brother’s name by going and restoring humanity through the Tree of Life, but getting there and continuing on is much more difficult than it actually seems, thanks to Corrupted enemies plaguing the worlds. And even that would be a cakewalk if it didn’t mean Death may end up potentially restoring his own kind that he was responsible for murdering in the first place.

From that point on, the story just adds on new layers of mythology that are interesting apart, but a bit cluttered when put together. Death’s a more interesting protagonist than his brother, but the game never fully goes into why he should feel responsible for the dilemma he has to face. Heck, even when he finds out who the actual antagonist is, it doesn’t feel like as big of a deal as it should. It’s all entertaining and comes together nicely at the end with an awesome potential for a sequel, but be prepared for some confusing moments.

Where the story stumbles, the gameplay shines. Combat from the original Darksiders largely hasn’t changed, having you hack and slash your way through grotesque demons. Unlike War, whose weapons were only his sword and a few extra weapons, Death has a much larger arsenal that ties into the game’s loot system. Upon death, enemies drop new clothes for Death to wear that increases his stats or new weapons for him to slay his enemies with. Along with scythes, there’s claws, gauntlets, axes, and plenty more for you to equip, and the game rewards experimentation when combined with Death’s powers that come courtesy of a two-tiered skill tree. The fighting feels a lot more fluid given the weapons and the Horseman’s ability to dodge attacks instead of block them, even though bad guys still find a way to gravitate towards you just when you think you’ve avoided them.

In addition to being a master at hacking enemies to pieces, Death is aces at traversal. He’s much more agile than his brother War; aside from the artful dodging he does during combat, he’s required to wall run and climb for much of the game. It all controls quite well for the most part, alternating between being really simple as pie and loud swearing levels of frustrating; there’s a boss fight that requires you to climb up its leg and use a grapple to get at a vital weak point, but the game was very stingy about just where I was supposed to climb up. Other times, Death is required to work through puzzles in order to progress. They certainly do require you to think outside of the box and use multiple abilities and items at once. This isn’t going to be like some of the toughest levels of the Portal games, but it won’t be a breeze either.

The first Darksiders got a lot of recognition for feeling like a mix of God of War and Legend of Zelda, what with the horse and the dungeons. Darksiders 2 still exists in that airspace, but has its eyes a bit more towards the MMO and dungeon crawler space. Along with the loot system, there’s quests for you to take from the folks who sell you weapons and moves; one character who gives you new combos will ask you to wipe out powerful enemies that he couldn’t while another will beg you to find relics of his dying race, things like that. You certainly never run out of things to do in the game, and the ability to warp back to hub worlds from nearly every dungeon there is to offer is definitely welcome in this case. But the large overworlds you can ride your horse through are just lacking in enough amounts of enemies to encourage exploring away from the main path. As it is, the riding around to new locations just feels more padded than the game already is.

The game clocked playtime at only 12 or 13 hours, but it certainly felt longer than that. You’re continuously stopped by a new roadblock, either by way of an enemy encounter or a puzzle for you to figure out. At one point towards what I thought was the game’s halfway point, I had to collect three of something to be part of another three of something, and it went on annoyingly long. There’s a bit on Earth that requires you to just shoot waves after waves of enemies that goes on way too long and wears out the novel “fun waste of time” bit.

As is the case with other remastered games, Darksiders 2 boasts having all the DLC bundled together, and while there are some new weapons added in, the real meat comes from the dungeons. The best of them has to be Argul’s Tomb, which has the best of what makes the game so fun. It doesn’t wear out its welcome, has great encounters, and manages to provide some sweet loot. Abyssal Forge is solid, but doesn’t entirely feel as airtight as Tomb, and The Demon Lord Belial is pretty good as well. The remaster also has enhanced graphics and an improved camera, or rather claims to; while the game does indeed look prettier, the camera may have gotten worse in some aspects. It gets too close on Death sometimes (or sometimes too far out that you can’t see him all that well) and during combat, the lock on is just plain bad.

Still, when the game works, it certainly works. Getting past the camera issues and annoying padding is a fun game that’ll definitely keep you entertained. Plus, you can become a giant spectral reaper and pick apart enemies the size of a Transformer with a single swing. How can you say no to that?