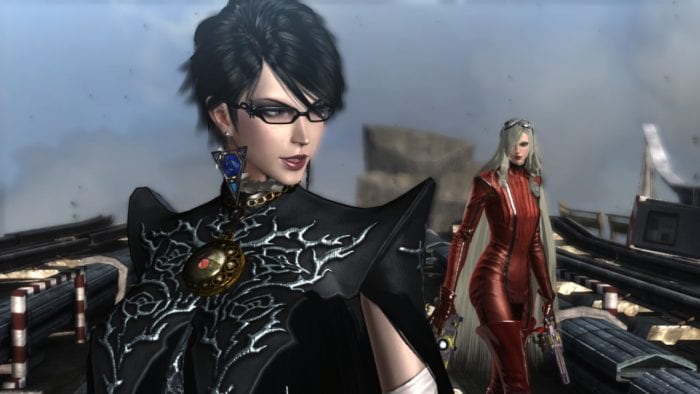 Bayonetta 2 coming to the Nintendo Wii U exclusively after five years of the first one being released on PS3 and Xbox 360, came as a surprise to everyone in the video game world. Learning that Nintendo essentially paid for PlatinumGames to develop a sequel to the somewhat “cult classic” was insane and what’s even more insane, is that Bayonetta 3 is currently in development for the Nintendo Switch, exclusively of course.

In honor of the announcement of the third game, Nintendo also announced that Bayonetta 1 and 2 would be coming to the Switch, which by the way, is out now as we speak. You can fight angels and demons as the heel-wearing, gun-toting heroine, but this time, on the go. The characters in the series have always been eccentric, wild people who all have insane personalities, and with these personalities come some pretty fantastic voice performances by the cast.

We decided to put together a gallery of the main voice actors who bring these characters to life. The talent that makes Bayonetta ‘Bayonetta’. If you’re wondering who the actors are, then this gallery is just for you. We even included a short bio of each voice actor, so you can see what roles they’re famous for and whether or not you recognize them.

Hellena Taylor is a British voice actress who is known for her work in the theatre community more than anything else. Landing the role of Bayonetta was her first big video game voice job, besides having a few lines in Dragon Age and Valkyrie Profile. Hellena has also done some voice work for GPS systems, spoken ringtones, and voice matching. Taylor seems to have used her voice in every which way.

If you watched cartoons in the early 2000's then Grey DeLisle's roles that she played will make you go, "ohhh, that was her." DeLisle is best known for playing the voices of Vicky in The Fairy OddParents, Sam in Danny Phantom, Mandy in The Grim Adventures of Billy & Mandy, and Kimiko in Xiaolin Showdown. In the video game world, you might recognize her voice from Metal Gear Solid: Peace Walker as the voice of Amanda Libre.

The New York born actor, Chick Vennera, started his acting career by performing the Broadway musical, Grease, for a year on tour. Playing the role of Enzo in the first Bayonetta was his first video game voice role. Unfortunately, he was replaced in the sequel by another actor and has not had any big roles in recent years, but he does teach acting to up and coming performers, which is probably why he hasn't had time to perform himself.

John Kassir is very well known for playing the Crypt Keeper in HBO's Tales from the Crypt. He's also done a lot of cool voices over the years, ranging from Raymundo in Rocket Power, Meeko in Pocahantas, and even Deadpool in Marvel: Ultimate Alliance. Interestingly enough, he was featured in the first-ever commercial for The Legend of Zelda back in the 80's - lucky.

When he's not doing motivational speeches or writing speeches for other presenters, Albrecht has provided his talent for many video games as well as television shows. He suffered a spinal injury that left him relying on a cane or wheelchair, but he's still trucking along and has been featured in some big-name games like Destroy All Humans, Metal Gear Solid 3, Happy Feet, and Brutal Legend - just to name a few.

Chicago born actor, Crispin Freeman, has mostly done voice-over work for Japanese video games and anime. You might recognize his voice from Slayers (Zelgadis), Hellsing (Alucard), or Overwatch (Winston). He states that the show that got him into the industry was The Vision of Escaflowne, a late 90's mech anime. Freeman also teaches voice-acting classes in Los Angeles when he's not lending his voice talents to games and TV.

Lowenthal has landed some huge roles in a variety of cartoons and anime. He's played the role of Ben Tennyson (Ben 10), Sasuke (Naruto), and even Alucard (Castlevania). The first shows that he watched that got him really into anime were programs like Speed Racer and Star Blazers. He and his wife, Tara Platt, own a production company where they have released several films, and a web series called Shelf Life.

Dave Fennoy had the spotlight in the first season of Telltale's The Walking Dead, playing the role of Clementine's 'protector,' Lee Everett. That's not the only Telltale game that he's been featured in. Fennoy has also voiced the roles of Bluebeard (The Wolf Among Us) and Gabriel the Warrior (Minecraft: Story Mode). Telltale seems to have a strong affinity towards using Fennoy in their games, and it's hard to see why they wouldn't.

Daugherty has been featured in the 2012 film, The Amazing Spider-Man, as well as The Fosters, The Middle, and 1000 Ways to Die. Even with his extensive resume, the role of Loki in Bayonetta 2 has been his one and only video game credit. Maybe we'll see an appearance from Daugherty in the upcoming Bayonetta sequel; only time will tell.

Jenny O'Hara has been lending her acting talents to film, television, and the stage since the 70's. Being in the business for that long, there are tons of shows and films that you might recognize her from. Have you guys seen that horror movie, Devil? Well, she played that scary old woman, and that was quite the performance. However, just like Mark Daugherty before her, the Bayonetta series was her first time voicing a video game character.

Ramini has found his way into multiple video game franchises in recent years, some that you might recognize are: Uncharted 3 (Salim), Sleeping Dogs (Naz Singh), Star Wars Battlefront II (Del Meeko), and Tacoma (Clive Siddiqi). Ramini is also a screenwriter and has just completed principal photography for his first film, Get Lucky.

Over the years, Tatasciore has voiced over 100 characters. If you ever watched a cartoon, like ever, you have probably heard his voice sometime in your life. We're talking Hulk, Deathstroke, and other monstrous-type voices. In the past few years in the video game world, he's voiced characters in Final Fantasy XV, Overwatch, Gears of War 4, and many, many others.
Comments
Continue Reading
Related Topics:actors, Bayonetta, Bayonetta 2, collection, nintendo, platinum games, sega, Switch, talent, voice actors, voice cast