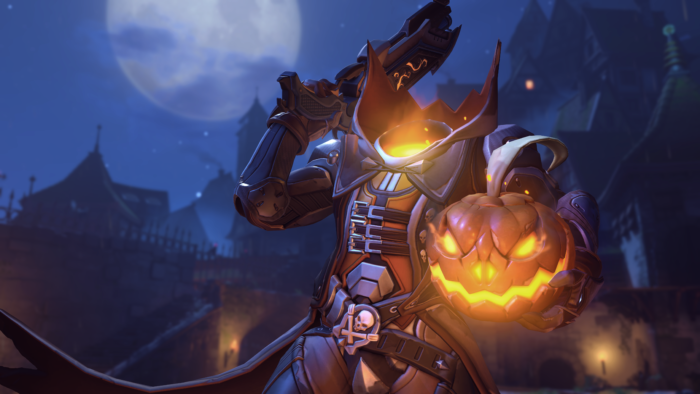 Halloween is here and better than ever, this time providing for gamers perhaps the most treats ever outside of the holiday season. From popular shooters like Overwatch to multiplayer online battle arenas like Heroes of the Storm, this Halloween is sure to be a delight no matter what one’s preference of genre is.

As in any festivity, one must dress the part in order to fully embrace the essence of the celebration. Each game on the following list of best Halloween skins in gaming fully captures that, crafting costumes for playable characters in order for all fans to witness what the spookiest day in October truly is.

One will find costumes here that are inventive, taking a page from a character’s origins, say, and making good use of fairy tales or fables from wherever they may be from. This is exemplified in the case of Mei from Overwatch, as the game’s annual Halloween Terror event allows players to randomly obtain a skin of the ice-wielder that makes a direct reference to the Chinese hopping vampire, otherwise known as the jiangshi.

One will also find costumes that are unique and unexpected, choosing to embrace a specific theme rather than take on a more generic Halloween celebration. In Black Desert Online, for example, players can obtain Angelic Queen and Demonic Queen outfits after completing a new quest line set in the vein of Alice in Wonderland. This may be the closest players ever get to playing an MMO set through the looking glass, so they might as well do so while dressed to the nines.

All in all, skins are meant to add an element of customization to the game. They make the gameplay experience just a little more engaging, embracing the spirit of whatever the occasion to allow players to have more fun. After all, that’s what gaming’s all about, right?

Mei's Halloween Terror 2017 skin pays a clever homage to the ice-wielder's country of origin, as jiangshi are Chinese hopping vampires. The inclusion of this skin keeps in line with the festivities and stays true to the game's overarching theme of fair cultural representation.

Black Desert Online's Halloween in Wonderland event is as novel as it sounds, completely immersing players in the look and feel of Lewis Carroll's imaginative world. This includes skins for a good queen and a bad one, though in fairness the outfit for Demonic Queen's dress is much more memorable.

Annie's Halloween skin in League of Legends is as menacing as it is cute, dressing up the little girl and her sidekick as Dr. Frankenstein and his famous monster. It makes for quite a delight on the battlefield and one can't help but to grin a little even after a painful defeat.

Heroes of the Storm - Countess Kerrigan

The self-proclaimed Queen of Blades is worthy of her countess Halloween skin in Heroes of the Storm, if only because it's a fitting outfit to wear over her dominion of the Zerg army. Blizzard did a great job not only by finding a worthy skin for her, but for designing the elaborate gown altogether.

Nocturne is already a pretty cool-looking character in League of Legends as is, undoubtedly being the first hero players choose upon first starting the massive multiplayer phenomenon. It's amazing that Riot actually made a skin worthy of the levitating creature, then, even if that skin is that of Nocturne as a not-so-scary ghost. It's silly but memorable.

This Greek god's skin is very fitting for the character, as Thanatos sees humans as nothing more than easy prey to kill. The character is in many ways a god of death already, so it's no wonder why the Grim Reaper attire suits him so perfectly. Hades would be proud.

Warframe - Day of the Dead

Warframe decides to mix things up a bit by not celebrating Halloween directly. Instead, the shooter's end of October activities focus on the Mexican Day of the Dead, which is celebrated in the country on November 1 and 2. Skins mostly include capes adorned with the signature skulls of the holiday, making each subtle yet still unique.

Blizzard knows how to have great fun with its fans come time for seasonal events, and this is no more apparent in any other skin they've made than with that of Zarya this Halloween. Players may have been expecting something a little more edgy, but her Totally 80's look really is Halloween Terror's star of the party.

Teemo is regarded by many League of Legends players as one of the most despicable characters in the entire game. It's only fitting that Riot make a devil outfit for the rascal come time for Halloween, as that's his reputation in the community anyway.

No Halloween skins list would be complete without the inclusion of Witch Mercy, which still sees countless people cosplay her at gaming and anime conventions all around the world. This skin made waves when it released at Overwatch's Halloween event last year, and it still doesn't look like it's faded from fans' memories yet.
Comments
Continue Reading
Related Topics:feature, halloween event, halloween skins, halloween terror, Heroes of the Storm, overwatch