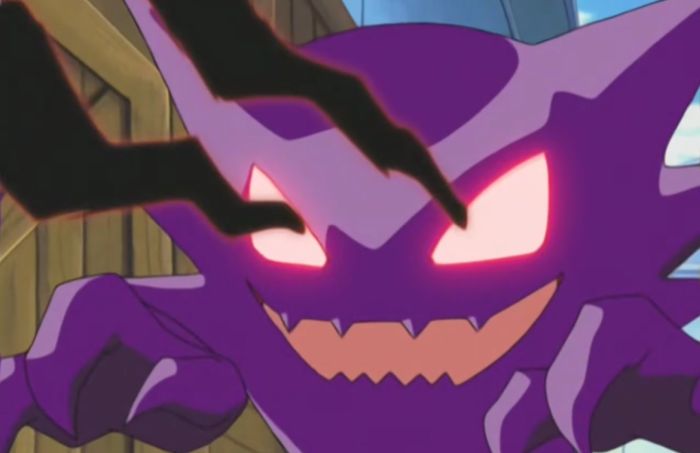 Mimikyu, a Gen VII ghost-type Pokemon, has a backstory that’s as sad as it is scary. This lonely pokemon wears a disguise that resembles Pikachu in order to get close to people. Without its disguise, however, Mimikyu takes inspiration from Patrick Star’s famous “Ugly Barnacle” story. Once, a scholar took off its disguise and died upon seeing its true form!

Chandelure may not be the most inspiring Pokemon design, making it easy for trainers to overlook. To make up for this, Chandelure swings its flames around, hypnotizing trainers. Once they’re in a trance, it steals their soul and burns it for fuel.

Yamasks have tortured existences. They rise from human graves, each carrying a mask that looks like their old face. They carry around these constant reminders of their past life, crying when they look at them, and still remember everything about life as a human. Yamasks don’t have the blessing of ignorance… they know they’re dead, and that those they loved are dead as well.

Haunter’s are scary in a nuanced way… they just love murdering people nearby. While their evolved form Gengar enjoy light-hearted pranks, Haunters doom travelers with a lick. Once licked, the victim will shake and convulse until they eventually pass away.

Another fairly lame design that masks a truly frightening Pokemon, Palossand at first looks like an impressive sand castle. In truth, this ghost-type Pokemon has the ability to set powerful curses on people. When those curses lead to death, Palossand covers up the bones and hides them beneath its body.

Anyone with fear of clowns can emphasize with trainers terrified of Gourgeist. This pumpkin-like Pokemon has long hair that look a lot like arms, and it uses them to torment humans. They walk through the streets at night singing an eerie song, cursing those who hear it. I’ve you’ve been cursed, Gourgeists trap you with their hair. From there they sing merrily, watching as you suffer.

Drifloons look like the perfect Pokemon for a child. They’re pretty much just sentient balloons, perfect for birthday parties! Many young trainer’s parents likely had that exact thought, until light-weight children who held Drifloons started to slowly disappear. Where Drifloon take them, no one knows for sure, but they are easily overpowered by kids with a little weight!

Froslass’s origins are shrouded in mystery, but legend has it a woman who was once lost in snowy mountains turned into a Froslass. Once Froslass finds its prey, it freezes them with its icy breath and brings them back to its lair. Froslass has an eye for interior design, and puts the frozen bodies of people and Pokemon on display in its icy den.

Dolls are terrifying, and Banette is no expection. This ghost-type Pokemon used to be an ordinary doll, until it was thrown out by its owner. Betrayed, powerful feelings of hatred drive them to life. Banette travels the world searching for the owner who discarded it, yearning for revenge. It does have one vital weakness, however. Its mouth is sealed shut by a zipper than holds all that hateful energy in. Once opened, Banette turns back into an ordinary doll.

Phantump isn’t scary to look at, but if you’ve ever caught one you need to take a good long look in the mirror. Phantumps are created when spirits possess rotten tree stumps… spirits of children who died in the forest, to be exact. Trainers who use Phantump are actually having Pokemon battles with dead children’s spirits. But hey! At least the leaves on Phantump can be used as medicine to cure any illness!

This Gen VII ghost-type Pokemon has a backstory that's as tragic as it is scary. Mimikyu just wants to fit in with people and Pokemon, but, like Patrick Star's Ugly Barnacle, its true form is too hideous to reveal. While you may think that sounds foolish, once a professor took off Mimikyu's disguise and died from shock upon seeing its true appearance.

At first Chandelure might seem like it's trying too hard to be scary, but upon further review it succeeds. This rather unassuming Pokemon will twirl its blue flames to put its victims in a trance. Once they've been appropriately hypnotized, Chandelure consumes their soul and burns it as fuel. The blue light it produces serves as the next fiery trap for another victim.

Yamasks aren't blessed with ignorance upon rising from the grave. They're human spirits reborn, bearing a mask that resembles their appearance in the realm of the living. Yamasks look at this visage and cry, realizing that they are dead and will never see their loved ones again. It definitely would be best if they just didn't know they were once alive...

Haunter's aren't scary in a particularly nuanced way... like any good monster these ghost-type Pokemon just enjoy killing people in a savage and ruthless way. One lick from a Haunter spells doom for the victim. Death's sweet release doesn't come right away, however. You have to deal with freezing up and violently convulsing before you pass on. Why are trainers so comfortable approaching these in the wild?

At first glance you'd be forgiven for thinking Palossand was nothing more than a very impressive sand castle, but beneath its surface lies a dark secret. Palossand uses powerful cursing abilities to hypnotize its target, and beneath its base rests a horde of bones from its victims.

Anyone who has a fear of clowns will be able to relate to trainers who fear Gourgeist. This ghost-type Pokemon has weird hair that looks like human arms. They gather in towns and wander through the streets singing a song, which would be nice and festive if hearing the tune didn't result in a curse. Cursed victims get trapped by Gourgeist's hair, who watch and sing joyously as their victims suffer, as any creepy clown worth his overalls would.

You could fool a parent into thinking Drifloon was the perfect Pokemon for their child. In fact, I'm sure many trainers' proud parents thought just that. Although they look great for parties, do not give a Drifloon to a small child. Many youngsters have been carried away by Drifloons, never to be seen again. Where they go, no one knows for sure. Fortunately, Drifloons are easily overpowered by kids with a little weight!

Froslass have a mysterious backstory. No one knows for sure, but it's rumored that a woman who got lost in snowy mountains turned into Froslass. She must have had an eye for interior design, because Froslass love decorating their den. Particularly with humans and Pokemon. They freeze their prey with their icy breath and bring them to an icy lair where victims are put on display.

Dolls are creepy, and Banette is no exception. This ghost-type Pokemon was once a standard doll, loved by its owner. Until one day, when it was thrown away coldly. Feelings of powerful hatred and betrayal brought Banette to life, sealed inside it by the zipper on its mouth. It travels the world searching for the owner who abandoned it to extract calculated revenge.

You might want to think before you catch the next Phantump that jumps out at you. These cute little ghosts are created when spirits possess rotted tree stumps... but they're not just any spirits. They're spirits of children who died in the forest. That's right: in the world of Pokemon, trainers using Phantump are using the spirits of dead children in Pokemon battles. Who thought this was a good idea again?
Comments
Continue Reading
Related Topics:3ds, feature, nintendo, Pokemon