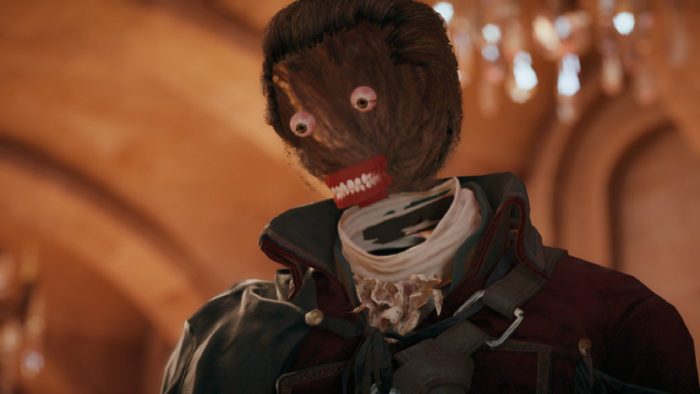 Quantic Dream’s Heavy Rain touches on a lot of truths about parenthood. It explores the relationship between father Ethan Mars and his son Shaun as they flee from a psychopathic serial killer. Unfortunately, one of the key plot-points can be ruined by a ridiculous glitch.

At one point, a prompt appears, telling the player to press ‘X’ to have Ethan call out to Shaun. Sometimes, this prompt never goes away, and Ethan can continue to yell loudly for Shaun for a good portion of the game.

Ethan saves Shaun from drowning and ironically shouts “Shaun!” as he comforts him. Then, Ethan’s ex-wife approaches him and tells him who the serial killer is, and Ethan screams back “Shaun!” As the serial killer shoots Ethan in the stomach, Ethan continues to shout “Shaaaaaaaaun!” while he’s lying on the ground. It’s unintentional comedy gold.

When protagonist Arno’s face doesn’t load properly into Assassin’s Creed Unity, an already sinister cutscene becomes infinitely creepier. Stare into that void of that face as the protruding eyes and chattering teeth gaze upon his murder victim. Yikes…

This glitch can be replicated in many other portions of the game, including a kissing scene that looks just terrifying. Other characters can don the effect as well, such as this lovely bonnet-wearing individual. Nightmares.

Fact: Skyrim is a very buggy, but very fun game. Bethesda’s notoriety for glitches and bugs can lead to disasters (ahem, Fallout 76), but in The Elder Scrolls V: Skyrim’s case, the glitches are a near-infinite well of comedy gold. A perfect example of this is perhaps the simplest and most common bug: The giant catapult.

If you’ve encountered a giant somewhere in Skyrim’s vast expanse, you’ll quickly find that they aren’t all too friendly. In fact, if you get too close to a giant, it will launch you into the stratosphere with a velocity only NASA’s best engineers could match.

Is this a bug, or is it intentional? Frankly, it’s hard to tell with Bethesda. It sure is dang funny, regardless.

Rockstar Games have their fair share of glitches, but none more infamous than the swingset launcher from Grand Theft Auto IV.

It’s a simple glitch to pull off: press a vehicle against any one of the swingsets around Liberty City (the best one is at the Firefly Projects Park), and there’s a good chance that you’ll be launched several hundred yards away.

Sometimes, player-character Niko will fly out of the vehicle mid-flight, crashing catastrophically into a brick wall before the car explodes. Other times, he stays in the car the whole flight, tumbling through the streets before miraculously landing on all four wheels.

It’s such an unpredictable glitch, which is exactly what makes it so much fun. 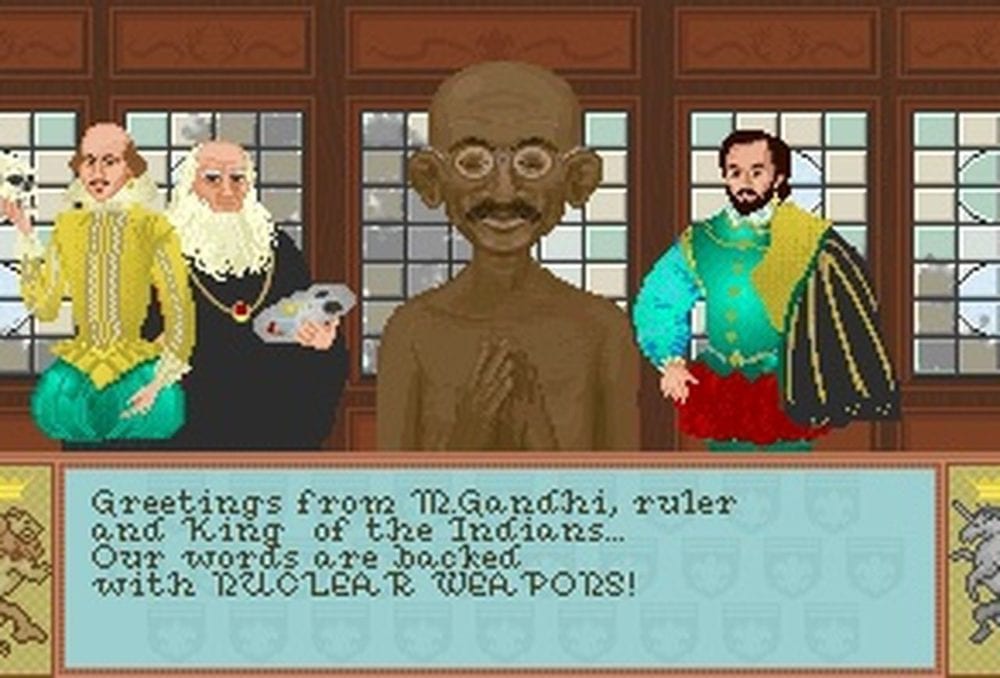 In the original Sid Meier’s Civilization, there are a number of real-world leaders that are used in-game to represent certain countries. Among these leaders is Mohandas Gandhi, an Indian reformer who was famous for his refusal to resort to violent protesting.

To reflect Gandhi’s peaceful campaign, his character in Civilization was set at a threat level of 1, which would (in theory) make him a non-threat. But is the player chooses “democracy” as the government type at the beginning of the game, it reduces other nations threat level by 2, causing Gandhi’s threat level to loop from the minimum level (1) to the maximum level (255).

Because of this strange bug, Gandhi is ironically one of the most violent, nuclear threats in the original Civilization. As weird as it was, people thought it was hilarious, so the developers have continued to keep Gandhi’s threat level ferociously high in every Civilization sequel.

In a game with the freedom and expansiveness of Minecraft, you have to expect to see some bugs every once in a while. Back in 2012, a genius discovered that by manipulating a cat’s ability to teleport to the player, you can create an infinite fountain of cats.

Now, depending on how you feel about cats, this could be either a source of unbridled joy and peace or hell itself. Either way, it’s a pretty great glitch, although it’s been patched in the years since this video was uploaded.

Another Rockstar game! Horses and wagons are pivotal to John Marston’s transportation in the original Red Dead Redemption. But what happens when those things fail him? This glitch!

You may run into this bug where all of the wagons in a single area will start bouncing around, quivering, shaking, and overall acting a little out place. One wagon even sends its accompanying horse on top of a powerline. Maybe Red Dead’s aliens had something to do with this?

New Vegas’s resident surgeon Doc Mitchell is already creepy enough in his own right, but when his head starts spinning in place, it’s pure nightmare material.

What’s ironic about this glitch is how he’s lecturing the player about brain damage while his brain is clearly detached from his body.

ET, But With a Tank – Grand Theft Auto III

Grand Theft Auto III set the standard for open-worlds way back in 2001, not only in its complexity and density but its glitches. Arguably the best one is the flying tank glitch, which lets you soar across the sky, ET-style, but instead of a bicycle, you’re riding a military-grade combat vehicle.

To pull this one off, you drive the tank across a bridge, firing backward the whole time, until you reach the bridge’s apex and soar! It’s a glorious spectacle, and some might say that’s easier to control than the actual plane.

Way back in 2011, Battlefield 3 kicked off with an early-access beta to test the online connectivity and work out the kinks. Thank god, because there was a big kink in this beta: giraffe man.

If you entered a crawling position army crawl position during this beta, your player character would end up in horrifying position. Extended neck, outstretched arm, gun in leg – you may not like it, but this is what peak performance looks like.

Sports video games are especially notorious for their hilarious bugs and glitches. Take this WWE referee, for example. Watch as he smoothly swings his dislocated arm into place, ending with a nice gesture for the winner of the fight. Now that’s sportsmanship.

Few glitches cause an entire game to drop off the map, but this one did. Back in 2010, Youtuber therealhard8times posted this video during NBA Elite 11’s public demo, showing former NBA Lakers player Andrew Bynum stuck in a T-pose at center-court, “like f***ing Jesus.”

Among a number of other concerns, this glitch prompted EA to cancel NBA Elite 11’s full console release. Too bad, we could all do with a little more ‘Jesus Bynum’ in our lives.

In general, UFC is usually resistant to bugs and glitches. But every game has its awkward moments, and this video perfectly encapsulates a few UFC moments with the added hilarity of fake announcers in the background.

Just look at the grace in the ‘merry-go-round’, or the bravery of the guy who fights the “ghost who’s been haunting the arena”. There’s also the “seventy-foot-sliding take-down” that leads into a “butt-back mount”. If the real UFC were this hectic, we’d probably watch it more often!

Sure, sharks may be scary and all, but you know what would make them extra terrifying? If they could leap out of the water and swim… on land. *shivers*

Indeed, to this player’s chagrin, this great white has forgone years of evolution and abandoned the safety of the ocean in favor of the sandy shores of us landlubbers. It’s not the shark’s wisest idea, though, as it looks like it’s about to get a faceful of hot lead. I guess sharks aren’t especially well-known for their smarts, right?