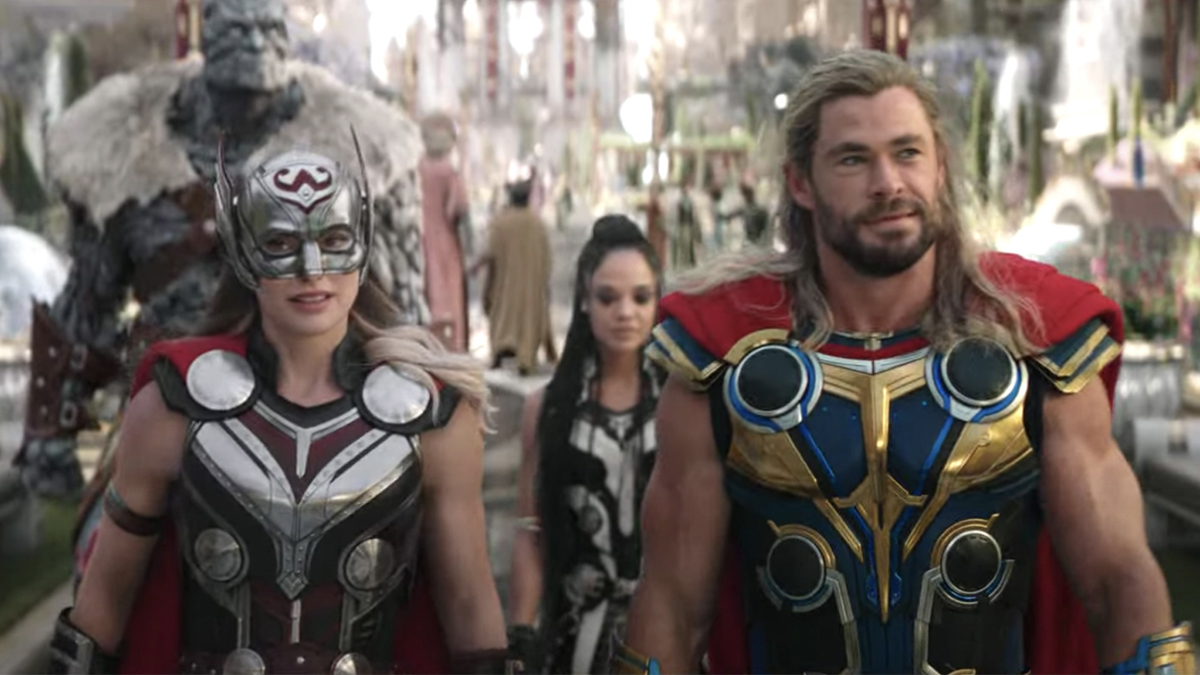 The Guardians of the Galaxy Holiday Special was the last entry into Marvel’s Phase 4. There’s been many good movies and shows in this phase, and there’s been many good couples that show that in the MCU, love is usually in the air. Spoilers follow, as here are the best MCU Phase 4 couples, ranked.

10. Sam and Bucky – The Falcon and The Winter Soldier

Sam (Anthony Mackie) and Bucky (Sebastian Stan) are not a romantic couple, but during The Falcon and The Winter Soldier, they’re getting to know and trust each other, learn to work together, and even go to couples therapy. So yeah, they’re a couple, even if it is in the crime-fighting type of way.

Both characters had the same best friend, so they’re not as different as they think. Their chemistry works in the Lethal Weapon kind of way, as they might not like each other at first (remember Captain America: Civil War?), but with time and new adventures together, everything changes.

Thor (Chris Hemsworth) had a long and loving relationship with Mjolnir, who thought he was worthy of him until Hela (Cate Blanchett) destroyed the hammer in Thor: Ragnarok. After Thanos made his move, Thor got Stormbreaker with the help of Rocket Racoon and Groot in Avengers: Infinity War.

In Thor: Love and Thunder, Mjolnir has come back to help Jane Foster (Natalie Portman) stay alive. One of the greatest running jokes of the film is the relationship between Thor, his old hammer Mjolnir, to whom Thor talks like it was an ex, and Stormbreaker’s jealousy. For everyone’s sake, let’s hope they can make it civil and work together, as they did in Avengers: Endgame.

Phastos (Brian Tyree Henry) and Ben (Haaz Sleiman) are the first MCU gay couple, married and with a kid together, becoming the first same-sex family in the Marvel universe. That could be enough to simply get them on the list, as the MCU track record with LGBTQ is somewhat disheartening, but the couple is much more than just that.

What makes this couple so important is that this connection restores Phastos’ faith in humanity, a belief he had lost after the creation and use of nuclear weapons. Without love, Phastos wouldn’t have helped the other Eternals in saving Earth from the Celestial growing from it, and humanity would’ve been doomed.

Ms. Marvel writers changed the comics character origin and in doing so, they gave us a small lovely story between Aisha (Mehwish Hayat) and Hasan (Fawad Khan), the great-grandparents of Kamala’s (Iman Vellani). In less than 20 minutes, fans see how they meet, fall in love with the help of flowers and poems, have a family and be separated forever. Before the episode, Aisha and Hassan were simple names in Kamala’s past, but after that episode, the tragedy and pain of how their story ended is felt by everyone watching the show.

Thor and Jane were always too different. That’s why no one batted an eye when they broke up off-screen between movies. Thor: Love and Thunder help with filling the gaps in their relationship, transforming into a rom-com for a few minutes with a montage of how they fall in love, live together, and fall out of love.

This film shows neither of them really got over the other. It’s not known what Jane’s romantic story has been since they broke up, but Thor’s biggest love, in the most recent movies, might’ve been beer.

In Thor: Love and Thunder they have one last dance together, showing that sometimes opposites attract for a reason, as they complement each other, and make the other discover new things, ideas, and activities. There’s still hope they’ll reunite once again, when everything is done, in Valhalla. Most fans are hoping for it.

Phase 4 might’ve given viewers its first MCU throuple. Steven (Oscar Isaac) and Layla (May Calamawy) were in love and married until Steven disappeared to avoid putting her in danger. Months later, they meet again, but Steven’s body is now inhabited by another of his multiple personalities: Marc.

Marc shares some of the same interests as Layla: he reads poems to her in French, is passionate about ancient mythology, and wants to talk about his feelings, and it looks like Layla is also attracted to this sweeter, clumsier personality.

Each personality has its own abilities, ideas, and feelings, but they have something in common: they love Layla, and it looks like she loves them back.

Only someone with an ego as big as the God of Mischief could fall in love with a variant of himself. Loki (Tom Hiddleston) and Sylvie (Sophia Di Martino) might have different pasts and circumstances, but both are emotionally distant characters who don’t let anyone close so they can’t get hurt. That’s why it’s so meaningful when they start to open up to each other, in an episode that the creator himself said was highly influenced by Richard Linklater’s Before Sunrise.

When at the end of the first season, Loki is much more worried about what has happened to her than whether he can actually save the universe. It not only shows Loki’s growth but also that sometimes falling in love with yourself, especially if it’s a variant, can be a good thing.

The fourth wall-breaking She-Hulk: Attorney at Law made fans excited when it was announced that Matt Murdock, AKA Daredevil (Charlie Cox), would make his comeback in this show. Not many could’ve expected that his chemistry with Jennifer Walters (Tatiana Maslany) would be off the charts and that he would end the show’s first season at a barbecue with Jen’s whole family as his boyfriend.

Jen and Matt have many things in common: both are lawyers and superheroes, have secret identities, and love to drink, so it makes perfect sense they would be a match made in superhero heaven. Whoever suggested that Matt should do a walk of shame in his Daredevil costume in sunny California deserves a big raise as it was one of the biggest laughs of the whole season.

“What is grief, if not love persevering” might be the most romantic and beautiful line written in the whole MCU. It is said by Vision (Paul Bettany) to Wanda on their sad goodbye. Although it would’ve been nice to see a little bit more of their relationship developing before Vision died in Thanos’s hands, this show is a love letter to their relationship.

Wanda loves Vision so much that she creates a unique strange reality so they can still be together. Their previous life experiences could not be more different, but they’ve still found each other as their better halves. So much so that her grief and love for Vision and their kids is what takes Wanda to the darkest of paths, transforming her into the villainous Scarlet Witch. Only love can bring her back.

The “will they, won’t they” between Peter Parker (Tom Holland) and MJ (Zendaya) is a slow burn that lasts two whole movies, and there’s nothing as beautiful in Spider-Man: No Way Home as their blossoming love for each other and their relationship. Peter trusts MJ unconditionally and asks for her help every time, and she becomes part of the “guy in the chair” team, while still being worried about him.

All those things make it much more heartbreaking the moment Spider-Man tells Dr. Strange that everyone must forget about him, including MJ, so that the universe can be saved. The saddest moment in the best Phase 4 movie occurs when Peter goes to see MJ, who doesn’t remember him, and, after seeing how she got hurt and still has a band-aid on her forehead, he decides to shut up, as he believes this is the best way to keep her save.

If there is a new MCU Spider-Man trilogy, they could follow other romances for Spider-Man. But we just ask that for the last one, come back to this romance, as this is not a simple teenage love. Peter and MJ are soulmates, made for each other, and we still have hope they’ll end up together as they’re the best MCU Phase 4 couple, and one of the greatest in the whole MCU universe.