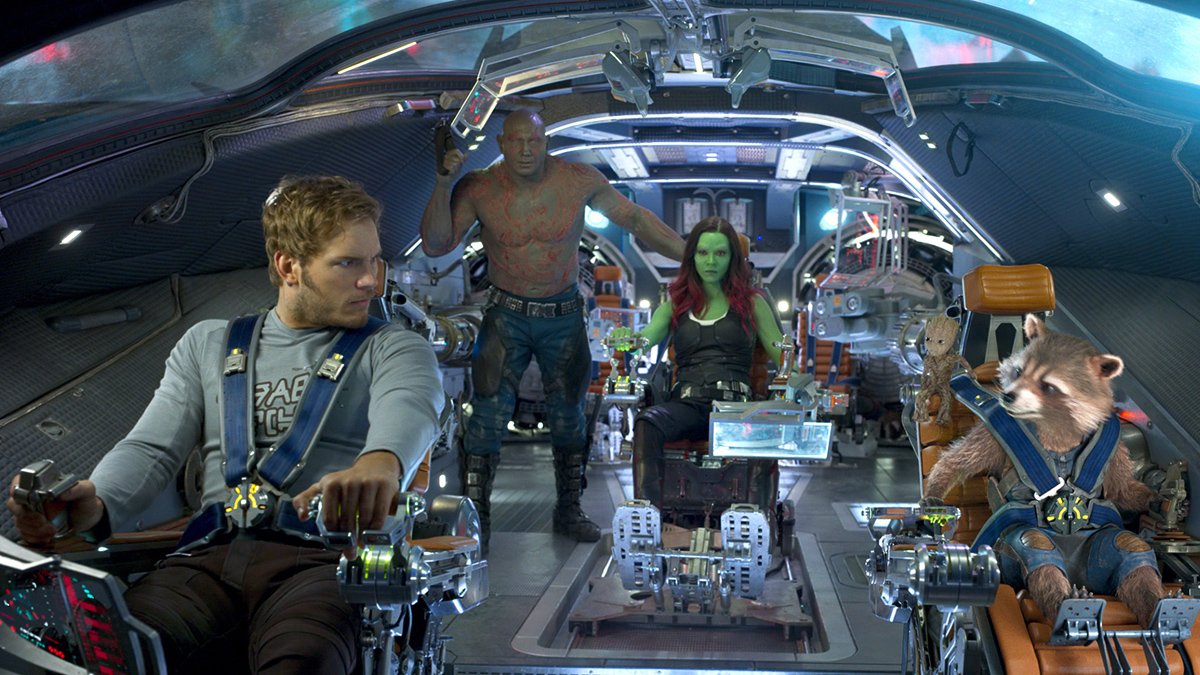 In 2014, Guardians of the Galaxy (GotG) became the second most important superhero team in the Marvel Cinematic Universe (MCU). Thanks to its world-building, from the music to the colors, it was an instant hit. With two movies fully dedicated to the group plus some special appearances in other movies of the franchise, the line-up changes often, yet there’s always something differentiating about each member. Hence why, it’s so fun to watch them together. By no means are they perfect, but that’s what makes it easy to connect with them. Let’s take a look at how every member of Guardians of the Galaxy ranks in terms of likability, starting from the bottom.

It’s not that Kraglin (Sean Gunn) is unlikeable (no member of GotG is truly unlikeable), but truth be told, we haven’t seen much of him as a member of the Guardians to make up our minds. What we know for sure is that Kraglin is very loyal.

First, he was fully devout to Yondu as he followed him to hunt the Star-Lord and then when he decided to join with the Guardians. Even though he felt jealous about how Yondu treated Peter, he was genuinely nice after Yondu’s funeral when he gifted Peter Quill a Zune with over 300 songs. The two shared a loving moment, and Kraglin acknowledged him as his new captain. It’s safe to assume that his loyalty will not waver; let’s hope we get to know him better beyond that trait!

Even though Mantis (Pom Klementieff) only made her first appearance in Guardians of the Galaxy Vol. 2, she won our hearts very fast. Not only is she super strong thanks to her incredible powers, but she has quite a quirky personality. When you combine her dry sense of humor with interactions with Drax, it provides some hilarious moments.

However, Mantis is also very sensitive and empathetic, making her, overall, a likable character. What stops her from being higher on the list is her lack of confidence in her skills and in a social setting. While, with time, she keeps getting better, it would be nice to see her flourish and explore her relationship with the other members besides Drax.

Let’s not forget that it was thanks to their friendship that she gained the courage to stand up against Ego. She has so much potential when she feels comfortable in her own skin!

Don’t get us wrong, we all are a bit Groot (Vin Diesel) sometimes. But Groot is, well… Groot. It’s true that with almost no words, he can make us feel and cry. He is a very unselfish character and sacrifices himself for the gang several times. Yet, we assume it’s easy to do that when you have the same regenerative abilities as he does. Nonetheless, it’s noble.

He’s extremely cute, and it’s easy to fall under his spell. From an adult to an expressive baby to a spiteful teenager, the writers really try to give him something new to work with so his character doesn’t get tiresome. While he provides great comic relief, it’s hard to connect with him beyond his cuteness and inability to say words.

Chris Pratt is the perfect Peter Quill as he manages to combine heroism with playfulness just right. If there’s a guardian that doesn’t take himself too seriously, that’s Peter. At the same time, he’s very confident and almost comes across as arrogant, yet his goofiness saves him. From a great soundtrack to impressive moves, he fully transforms the surrounding energy wherever he goes.

While the Star-Lord has a grieving past, he still tries to be nice and caring to people. However, sometimes he fails to be a team player, which is especially important as he is the leader. Although, when other people have their confusion and problems, he’s a great problem solver.

Meanwhile, when it comes to personal matters, his rational skills are lost, and he’s reckless. Take, for instance, Avengers: Infinity War when Quill tells Drax not to attack Thanos, and then he contradicts his own order once Thanos kills Gamora. In the end, the Star-Lord is not as cool as he thinks he is and still needs to grow up and evolve.

By the end of Avengers: Endgame, Thor (Chris Hemsworth) joins the Guardian’s ship and becomes an official member of the gang. Yet his membership doesn’t last too long on-screen as in Thor: Love and Thunder, he says his goodbyes.

Thor is a fan favorite and maybe the funniest Avenger. He’s always been funny without trying and is hugely charismatic. At the same time, his heart is mainly in the right place, and his powers… well, he is almighty. We still get chills thinking about his arrival in Wakanda in Infinity War.

He’s naturally a very likable character, and with the added layers of grief and self-discovery due to the loss of his family, home and hammer, this helps to make him even more likable. However, after failing to kill Thanos, Thor completely changed, and perhaps not for the better.

Not so much how he changed but how he was used as a laughing stock while he was going through serious PTSD, which turned a loved character into ridiculousness. Hence why he’s in the middle of the list.

Nebula (Karen Gillian) is probably the most complex character of the bunch and the one with the biggest trauma. Her toxic relationship with her adoptive father Thanos, which led to a life of rivalry and resentment toward her sister Gamora gives her purpose. And when a character’s purpose is well-built, it’s impossible not to connect with them and like them even if they start as the antagonist.

The way she was brought up had repercussions on her personality, which is ultimately robotic, yet with time we do get to see her emotional side. Her reconciliation with Gamora and her confrontation with her past self led her on a path of redemption that she couldn’t access before.

Moreover, as we get to see more of her personality, we notice that she’s not easily impressed but is not as serious as some might have thought and engages in jokes with the guardians.

Yondu (Michael Rooker) is incredibly confident and has amazing one-liners. Besides, his whistling is epic! He might appear as a villain at some points, yet all is ignored because of the relationship he establishes with the Star-Lord. Deep down, he cares about him and tries to do his best by him.

In the end, he is the father Peter Quill always wanted. C’mon, he sacrificed his life to save Quill from his biological father! It’s impossible to be indifferent to Yondu’s words “He may have been your father, boy, but he wasn’t your daddy. I’m sorry I didn’t do none of it right. I’m damn lucky you’re my boy.”

What a story arc, from being a hated character to leaving us in tears, Yondu shows what good writing and acting can do to a character.

Gamora (Zoe Saldaña) shares the same upbringing as Nebula, yet she didn’t suffer severe dismemberment as her sister. On top of that, she left Thanos quite early on and didn’t hold a grudge against Nebula as she did for her. Besides being stronger than Nebula and known as “the deadliest woman in the whole galaxy,” she is also a better person.

Even though she isn’t very trusting, and it’s hard for her to let loose in the beginning, she has proved to have the heart of a hero and truly cares for her friends. In the end, she shows herself to be truly selfless as she’s willing to let Peter Quill kill her so that Thanos doesn’t find the Soul Stone and when she attempts suicide to prevent Thanos from accessing the Stone.

Even though Rocket says that Gamora sucks the joy out of everything, that doesn’t make her unlikeable. On the contrary, we fully understand her. In a group of many funny members, she definitely stands out and keeps them grounded when needed.

Rocket (Bradley Cooper) is the sassiest raccoon to ever live. Not that we’ve met many raccoons. He’s very confident and resourceful, and it’s always fun to watch him bicker with Star-Lord over who’s the leader of the group. Even though he is a hothead, trash-talks a lot, and acts tough, he is a layered character with a soft side that appears every now and then, which makes him likable.

He is the true embodiment of romanticizing having a bad attitude. In the end, against the odds and after all that he’s been through, he reveals himself to be emotionally mature. When the time to be a team player comes, Rocket is the one to go to as he prioritizes the group’s needs instead of his own and can fully grasp what’s at stake, looking beyond the guardians.

Lastly, he’s the only one that fully comprehends Groot, not only because he has spent a lot of time with him but because he pays attention and is intelligent. What’s not to like?

Drax (Dave Bautista) is the complete package: funny, fearless, and caring. Sure, he’s not perfect (none of them are). However, he’s the most wholesome, and it’s nearly impossible not to like him.

Just like some other members, he has his eyes set on revenge as he wishes to avenge his family after they were killed by Thanos. While the motive that drives the character is yet another reason for us to like him, he goes above that with his unique personality.

His grief doesn’t stop him from building a deep connection with the guardians, calling them his family and sacrificing himself for them. Furthermore, Drax ends up being the funniest of the group (a hard job as most of them are really funny) as he can’t grasp metaphors and takes everything literally. On top of that, he doesn’t have a filter which leads him to be honest in all circumstances.

In the end, he manages to be more than a simple comic relief and jumps to the other side as a true point of connection and relatability.