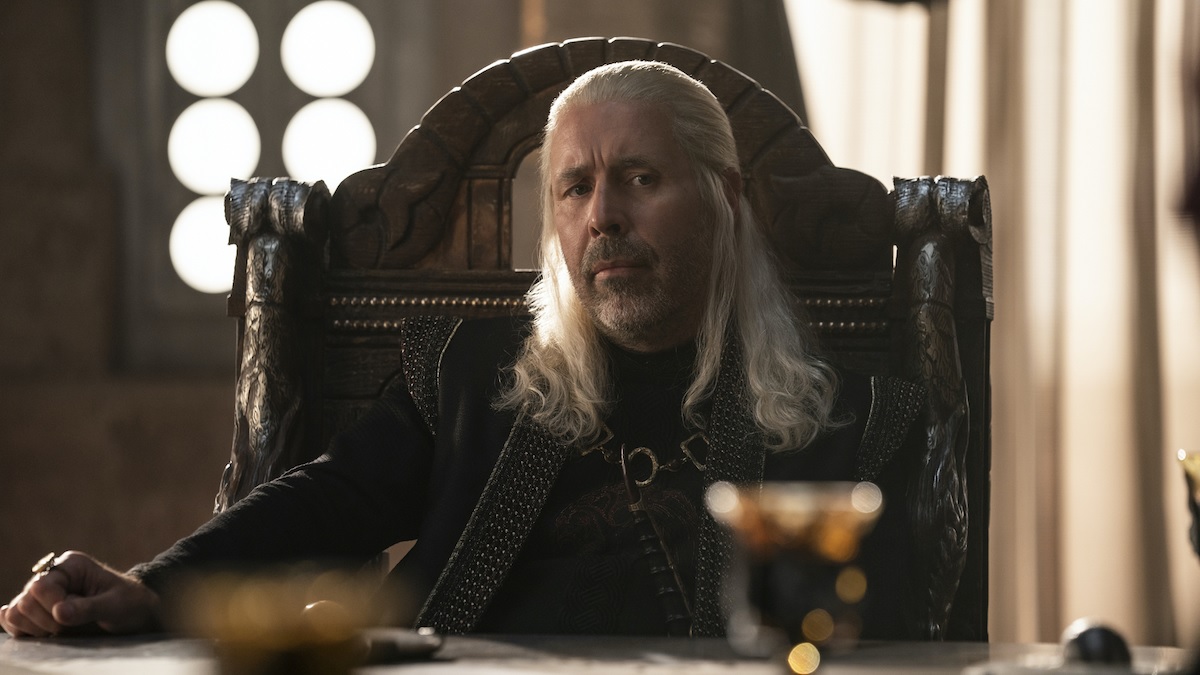 As the momentous first season of HBO’s House of the Dragon draws to a close, fans of the blockbuster series are already looking back on the season’s highlights.

For some, the show’s finest moment so far could be Aemond Targaryen’s claiming of the great dragon Vhagar. For others, Daemon Targaryen’s victory over the Crab Feeder may be a favorite. Regardless of where you stand, though, it’s difficult to deny the fact that this has been an incredibly eventful season of television. Assuming it sticks to the source material, Season 2 will be even crazier.

We’ve put together a short list of the best moments from House of the Dragon Season 1. Will your picks make the list?

***Massive spoilers for House of the Dragon Season 1 follow***

House of the Dragon’s season premiere is a busy one. Not only does it introduce us to many of the season’s most important players, but it also immediately sets up dynamics that will become vital in subsequent episodes.

Among the premiere’s best moments is the King’s tourney, which Viserys arranges to celebrate the impending birth of his son. The sequence acquaints us with Criston Cole, the future Kingsguard with a wild temper and more than enough combat experience to make that temper terrifying. We also get more Daemon characterization, which has quickly become one of House of the Dragon’s strongest aspects.

Vaemond Velaryon’s loyalty to his house, coupled with his desire for the Driftmark crown, is his undoing. His shocking death comes in the latter half of Episode 8, when he angrily calls Rhaenyra’s children bastards and invokes the wrath of the ailing King Viserys.

“I’ll have your tongue!” The King says, pulling a dagger from the folds of his cloak. But Daemon, who has been watching, smirking, and quietly egging Vaemond on, slashes away the top half of the man’s head and smugly remarks, “He can keep his tongue.”

Given Vaemond’s status and relevance to the plot, it was somewhat shocking to see him bite the dust so soon and with such little ceremony. Still, it’s a memorable moment that marks one of the show’s first major deaths.

The sequence is almost unbearably tense, an early showcase for the show’s remarkable writing. For a few minutes, it seems like a brutal battle is inevitable. Before anything crazy can happen, Rhaenyra arrives and convinces her uncle to give up the egg. Swords are drawn but no blood is spilled, cementing this scene as a masterful example of good suspense-building.

7. Criston Cole Beats a Guy to Death Over a Perceived Threat

Given how disturbing this scene is, it feels odd to include it in a “Best Of” list. But it serves a clear purpose: show Criston Cole’s true colors and help complete his shift to Alicent’s side of the conflict.

Watching Ser Criston beat Laenor Velaryon’s lover to a bloody pulp over a veiled threat is horrifying enough, but the writers, wanting to drive the moment home further, show us the dead man’s tenderized face.

Criston is a cruel, brutal bastard, and while his actions here push him closer to crazed pet than dignified Kingsguard, it’s nothing compared to the atrocities he’ll commit later.

In a few years’ time, when the entirety of House of the Dragon is at our fingertips, Aemond Targaryen’s claiming of Vhagar will likely still rank as a highlight of the series. While Rhaenyra and Daemon are, um, busy, the young Aemond seeks out Vhagar on a nearby beach with the intent to claim her.

The enormous dragon then drags him into the sky and treats us all to one of the best, most thrilling, and most important sequences of the season. Not only does this moment have great bearing on the season finale (you’ll see why), but it also gives us key insights into a dragon/rider relationship that will only become more pivotal as the series progresses.

Fans who’ve read Fire and Blood know that Princess Rhaenys, perhaps more memorably known as The Queen Who Never Was, commands the dragon Meleys. Up until the season’s penultimate episode, however, we had seen plenty of Rhaenys but nothing of her winged pet.

In the closing minutes of “The Green Council,” Rhaenys manages to free Meleys and escape King’s Landing, but not before contemplating the swift and understandable incineration of Alicent and Aegon. She spares them and flees Aegon’s coronation, undoubtedly to join Rhaenyra, Daemon, and the others.

But fret not, Rhaenys fans. She and Meleys will be back, and if the book is any indication, there’s going to be one hell of a Round 2.

Immediately after Lucerys takes Aemond’s eye in a bloody scuffle, King Viserys meets with both sides: Alicent and her children and Rhaenyra, Daemon, the Strong boys, and the Velaryon girls. Everyone present is clearly surprised at having been called together at such a late hour.

Alicent demands to know why the fight had to result in the loss of her son’s eye. Lucerys tells Rhaenyra that he took his eye after Aemond called him and his brother, Jacaerys, bastards. This prompts a heated discussion about where the rumor started and who started it.

This scene contains some of the best writing in the show so far. So much is packed into this 5-minute squabble: we get a sense of just how unfriendly Alicent and Rhaenyra now are toward each other, and we get an unhinged Alicent demanding Lucerys’ eye as payment for Aemond’s. So much drama, and the war hasn’t even started yet!

3. The Death of Viserys Targaryen

This is the moment the entire season has been building toward. Toward the end of his life, Viserys is too ill and in too much pain to do anything but sleep and sip on milk of the poppy. Vultures (Otto Hightower and select members of the Small Council) await his demise, and it’s all Rhaenyra can do to keep herself together. She has, after all, been watching her father slowly succumb to Westerosi leprosy for years.

The moment Viserys dies is handled brilliantly. We actually don’t see him die, though. We see him about to die, but the showrunners put the emotion in the suggestion of his death rather than his actual one. It illustrates even further just how well Ryan Condal and Miguel Sapochnik have written this character. The emphasis on emotion and character are stronger than ever here, and it pays off beautifully.

The House of the Dragon finale contains one major death: that of Lucerys Velaryon, who is hopelessly outmatched by Aemond and his enormous dragon, Vhagar.

The moment itself is brutal. Lucerys and his dragon Arrax, having evaded Aemond for a good while, are coasting above a storm when Vhagar appears and rips Arrax in half. Both halves of the dragon’s carcass spin away toward the sea below, Lucerys’ corpse hidden somewhere in the carnage.

This confrontation was a long time coming; Lucerys took Aemond’s eye several episodes ago after the latter claimed Vhagar and instigated a fistfight. We knew Aemond had a score to settle. We just had no idea he’d settle that score in the most savage way possible. It definitely makes for compelling television, though.

At this point, King Viserys has been slowly dying for several episodes, but it’s here, at this final, fateful dinner, that we realize this is his last meal. It’s a powerful scene punctuated with artfully-tossed barbs and sneaky provocations, but Paddy Considine’s turn as the ailing king is a jaw-dropper. We feel his sorrow, his regret, his desperate (but futile) wish for his family to make amends. House of the Dragon is never more potent than it is here.

Viserys is a well-meaning king whose good heart and eagerness to keep everyone happy frequently work against him. Here, as he dines with his loved ones for the last time, all of him, both good and bad, crashes together in a devastating performance that will likely earn Considine an Emmy nomination.

This sequence also gets extra points for teasing some juicy Aemond/Lucerys drama.